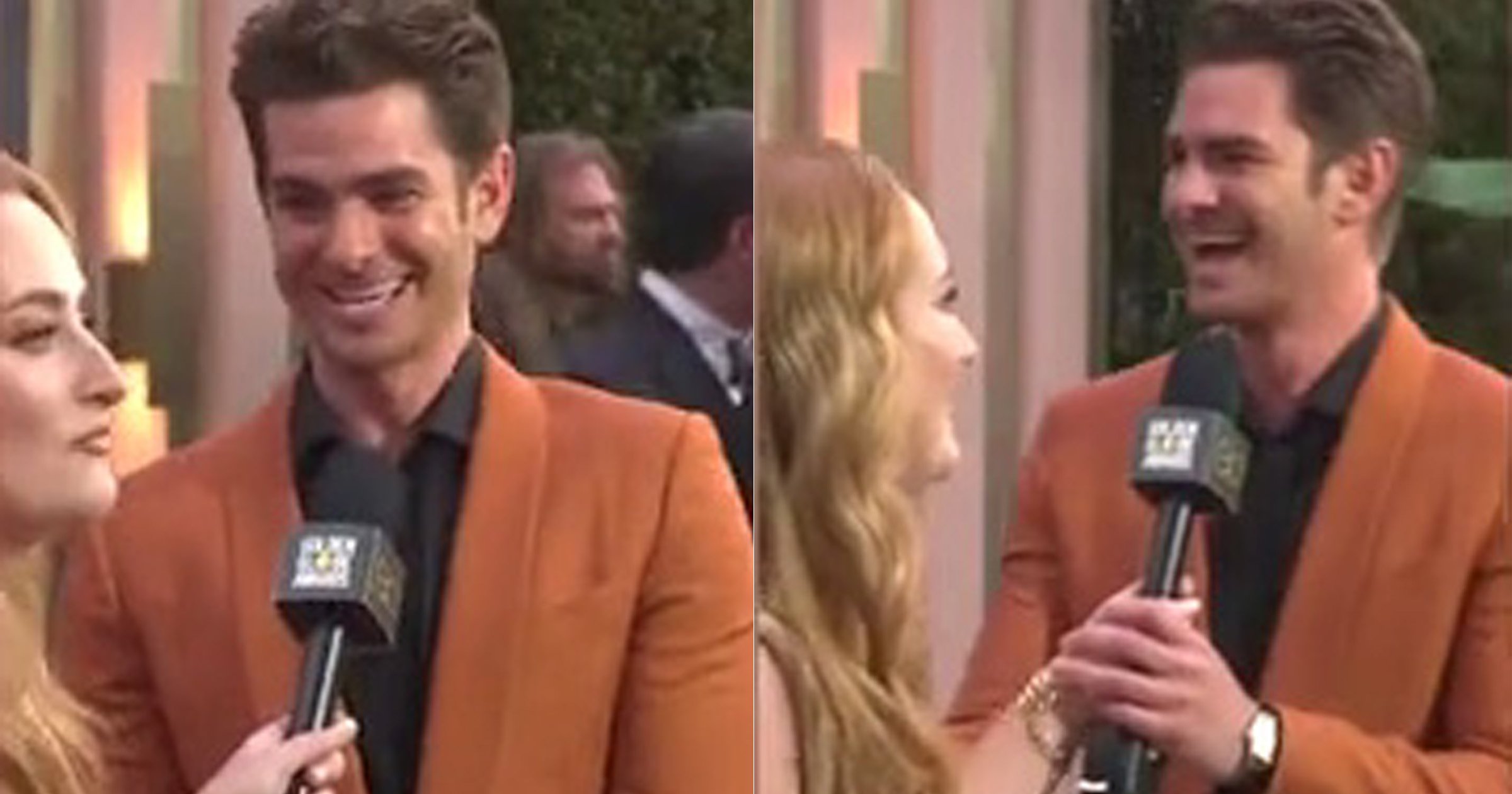 Amelia Dimoldenberg and Andrew Garfield sent hearts racing as they giggled and joked together in what fans are calling a pretty flirty interview.

As fate would have it, Andrew, 39, was also at the awards ceremony, nominated for best actor for his role in miniseries Under The Banner Of Heaven.

Although the Spiderman actor lost out on his award to Even Peters, who won for his chilling depiction of Jeffrey Dahmer in the controversial true crime series of the same name, all was not lost.

Amelia and Andrew previously met a few months ago on the red carpet at GQ’s Men Of The Year awards, where Amelia was shocked Andrew knew who she was, when he told her: ‘I think you’re great.’

But they hit it off particularly well this time around, with fans saying they are meant to be.

If you don’t like blushing, don’t watch, as one fan said: ‘I literally had to pause halfway through to take a breath bc I was blushing too hard.’

Another said: ‘The man is so in love. Get him down the chicken shop immediately.’

Now that we would love to see, as one fan pointed out, ‘You guys flirting is making ME giggle and kick my feet in the air, this is not okay’ while another laid it out and said: ‘i think?????? youre in love???? with each other???’.

Everyone got a bit too excited at the prospect, as one tweeter even wrote: ‘he is devastatingly into you. marry now’.

The world-famous actor was devastatingly coy around the journalist, and vice versa.

Famous for her stilted dates in Chicken Shops with celebrities, Amelia is always playing up to a flirty, awkward persona – but this time things seemed just a little too real.

As Andrew shuffled into the camera’s view, tickled by his entrance, Amelia joked: ‘Why are you – just stand. Be normal.’

Andrew then laughed (quite a bit, to be honest) and accused Amelia herself of shuffling along to chat to him, like a ‘capybara in the wild’.

What ensued was a hilarious and captivating exchange, in which the two seemed to get on very well indeed.

Amelia, playing up to her ditsy interviewer persona, joked that ‘we must stop meeting like this’, to which Andrew replied (with as much stealth as a great dane puppy), ‘I only ever want to see you.’

The actor then insisted that wasn’t intended to be the end of his sentence, but take that with a pinch of salt, because after Amelia asked him to her birthday party later this month (with her tongue firmly in cheek), he then went on to say their astrological signs are meant to be.

‘I don’t think we should explore this,’ he said, to which Amelia replied: ‘You’re the one obsessed with me’.

He then said he would be ‘scared of what it could turn into’ if they gave it a go, because it would be too much, and he’s ‘not ready for that kind of thing’.

Amelia leapt on this and replied: ‘I am.’

The pair were clearly both joking around, but it’s hard to ignore their natural chemistry.

When Amelia tried to resume her role as a reporter and ask him a question about acting, Andrew scoffed and said: ‘Are you actually going to ask a serious question?’

Naturally, as was the general vibe of the whole chat, the pair collapsed into giggles again.

It became clear neither party could take the interview seriously, and Amelia resorted to her all-time favourite question: ‘Favourite food?’

Andrew said his least favourite food was her looking over his shoulder to find someone else to interview – meow.

Amelia’s awkward-girl-trying-to-date-celebs persona, having slightly faltered during the exchange, came back in full force, as asked if they could ‘wrap this up because I need to speak to Austin Butler’, before asking the actor for his autograph, which Amelia claimed read: ‘Best friend certificate’.