LONDON — The spending power of wealthy Russians has been one of the elements that have given the 21st-century art market an air of excess.

In 2008, for instance, Roman A. Abramovich, one of a new breed of Russian mega-collectors, spent $86.3 million on a Francis Bacon painting and $33.6 million more on one by Lucian Freud. At the time, the prices set auction highs for any contemporary artwork, and for a work by any living artist.

But new realities have restrained oligarchical excess. Over the past five years, the West has imposed a barrage of sanctions on Russia, including asset freezes and travel bans, tied to its incursions into Ukraine, interference in elections, and the attempted assassination of a former spy in Britain. The British government is reviewing residency rights for more than 700 wealthy Russians. Mr. Abramovich, who has been based in London for years, became an Israeli citizen this spring after the renewal of his British visa was delayed. 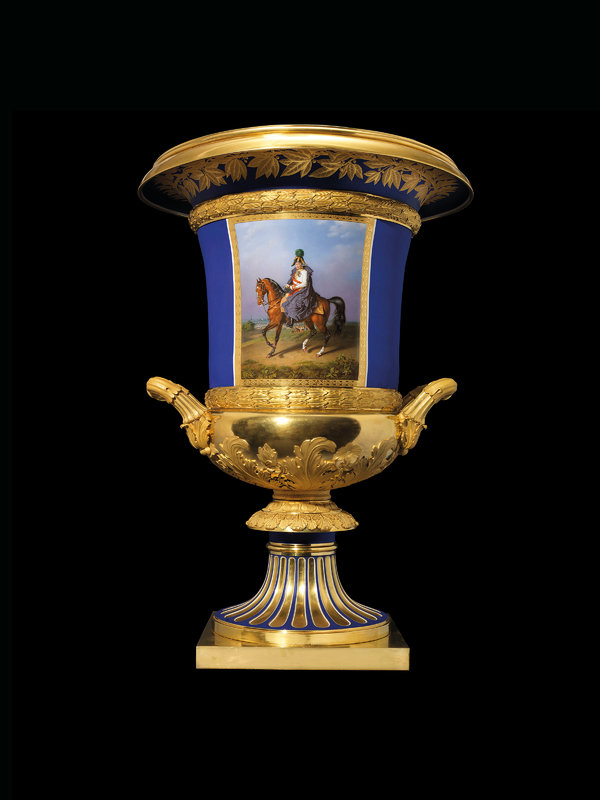 It is little wonder, then, that the latest Russian art sales in London were not as effervescent — nor as well attended — as they have been.

Alice Ilich, a consultant based in Sydney, Australia, who was at a recent Christie’s auction of Russian art, said it was “getting more difficult” for Russian clients to participate in London auctions. “They’re no longer at the peak of the market as they were several years ago,” she added.

Christie’s, Sotheby’s, Bonhams and the specialist auction house MacDougall’s offered plenty of material — some 1,180 lots in all — and about 65 percent of it sold, mostly to Russian-speaking telephone bidders. The selection was mainly a mix of pre-modernist works appealing to Russian nationalistic tastes.

A five-foot high Imperial Russian porcelain vase proved the unlikely top seller at Christie’s. Dating from 1836, the rare blue-and-gold vase, decorated with a portrait of Emperor Franz Joseph I of Austria, was estimated to sell for at least 800,000 pounds, or about $1.1 million, and sold to a bidder in the room for £1.8 million.

Ms. Ilich, the consultant, noted that Imperial Russian porcelain had fallen out of fashion with collectors. “But this was a monumental piece,” she said. “And anything of high quality sells well.”

Owners of high-quality Russian paintings were reluctant to test the mood. The most expensive picture at Christie’s proved to be an 1873 canvas of a sunset in Venice by the prolific 19th-century landscape painter Ivan Konstantinovich Aivazovsky. Sold from the collection of John W. Kluge, the creator of Metromedia, to benefit Columbia University, this slightly exceeded its upper estimate at £608,500.

A shortage of high-value pieces at Christie’s resulted in a total of £7.1 million from some 270 lots, of which two-thirds sold. The company’s equivalent auction in June 2014 — the most recent high point of the Russian art market in London — raised £24 million.

Major-name art was also in short supply at Sotheby’s, but its 195-lot Russian pictures sale did include the 1900 genre painting “Blind Man’s Bluff,” by Konstantin Egorovich Makovsky, who became famous for his idealized, historical scenes of Russian aristocratic life before the reign of Peter the Great.

The 93-inch wide painting of a children’s party game, filled with laughing figures, last appeared at auction in 1992, when it sold in New York for $110,000, according the Artnet price database. It sold on Tuesday to a telephone bidder for £4.3 million, double the low estimate and a new auction high for the artist.

“I was expecting a blood bath, but it didn’t happen. People were bidding on the telephone like crazy,” said James Butterwick, a London-based dealer who specializes in Russian art. After the Russian and Ukrainian navies clashed on Sunday, leading a Ukrainian client to cancel plans to attend the sales, Mr. Butterwick was at a loss to explain why Russian-speakers were so eager to buy art on Tuesday. “I can’t explain it,” he said. “People are nervous. They just don’t know what’s going to happen next.”

Like Christie’s, Sotheby’s managed to find buyers for about two-thirds of its pictures, plus an additional 264 lots of Russian art in the afternoon. These grossed £18.8 million in all, which was closer to the £23.8 million the company posted at its equivalent Russian sales in June 2014. Sotheby’s added a further £4.2 million to the tally on Thursday when it sold the private collection of the renowned Russian musician Mstislav Rostropovich, whose 1783 Guadagnini cello raised £1.9 million.

Sotheby’s works of art sale benefited from the inclusion of 26 Russian miniatures from the collection of the German cosmetics heiress Erika Pohl-Ströher. Regarded by experts as the finest collection of its type to have appeared on the market in recent years, it was described by the London dealer Ivan Samarine as an “incredibly valuable portrait gallery of Russian history.” All but one of the miniatures sold, raising a total of £1.1 million.

Among the lengthier telephone duels was the £75,000 given for a mid-18th-century Russian School portrait of Count Orlov, a lover of Catherine the Great, seated in a blue dressing gown, holding a letter. It had been estimated at £4,000 to £6,000.

The most highly estimated 20th-century painting of the week was “The Game of Billiards,” a 1918 canvas by Petr Konchalovsky, offered by MacDougall’s on Wednesday with an estimate of £1.5 million. The painting showed Konchalovsky, known as the Russian Cézanne, playing billiards with his artist friend Aristarkh Lentulov. It was bid to £1.6 million, a new high for the artist at auction.

But if anything, it was the more modest decorative works that most revealed the singular dynamics of the Russian market. Western eyes tend to glaze over at the prospect of one cloisonné enamel kovsh (drinking vessel) or coffee service after another, but these continue to be popular with Russian buyers, bolstering selling rates. The within-estimate £37,500 given at Bonhams on Wednesday for a presentation kovsh from about 1900 marked “Ivan Saltykov, Moscow,” was a typical purchase.

These are the sort of decorative antiques that have fallen out of favor with clutter-averse Western buyers.

“Russians like big houses, and they’re not frightened of ‘stuff,’ ” Mr. Samarine said. “They like a more opulent style.”

He likened the community of Russians who typically support these London sales to a “sea creature that’s pulled its tentacles back in.” Demand might not be quite what it was, but the available wealth remains formidable.

In April, the French economist Thomas Piketty estimated in a blog post that the offshore assets of wealthy Russians were worth more than the entire annual gross domestic product of Russia — nearly $1.6 trillion, according to the International Monetary Fund.

That’s a quite a creature.