Like the confectioners that craft Japanese wagashi, traditional tea-ceremony treats, the artist Ron Nagle, 80, creates miniature, meticulously rendered objects that are ripe with dual meaning. In his otherworldly ceramic sculptures, which are small enough to fit in the palm of your hand, pastel stucco planes converge with glossy half-moon shapes, suggesting animal tails, chewed-up wads of gum, bare tree limbs, erect genitalia or excrement — sometimes all at once.

Next month, some 30 of Nagle’s provocative sculptures and drawings will go on view at Matthew Marks Gallery in New York in the exhibition “Getting to No,” a significant showcase of his recent work. While Nagle is an established artist — in 2013, his sculptures were featured in the 55th Venice Biennale, and he has works in the permanent collections of the Metropolitan Museum of Art, the Los Angeles County Museum of Art and the San Francisco Museum of Modern Art — and though he played an important role in forming the California Clay Movement, which helped elevate the status of ceramic art, he is still something of a cult figure within a few relatively contained communities. Outside of the visual art world, though, he is also known as a prolific songwriter and composer; he’s credited for writing iconic songs on albums by Jefferson Airplane, Sammy Hagar and Barbra Streisand, as well as for creating many of the sound effects in “The Exorcist.”

[Coming later this spring: the T List newsletter, a weekly roundup of what T Magazine editors are noticing and coveting. Sign up here.]

Born and raised in San Francisco, Nagle apprenticed with the Berkeley-based ceramist Peter Voulkos in the ’60s and helped carve out a niche for ceramics to be understood as rigorous and conceptual sculptures, rather than simply decorative objects. He went on to teach ceramics at Mills College in Oakland for over three decades before retiring in 2010 and returning full-time to his practice. Throughout his life, Nagle has tried to make three-dimensional forms appear flat, while still evoking rich, microcosmic landscapes, taking cues from the Italian artists Giorgio Morandi and Lucio Fontana, who challenged the dimensional constraints of painting on canvas in the ’50s. Often installed in peep-hole-style wall recesses or gleaming glass vitrines, like specimens dropped down from another planet, his works mix elements of allure and repulsion to enigmatic effect. Named with tongue-in-cheek puns like “Pastafarian,” “Urinetrouble” and “Karma Gouda,” they are also extensions of his irreverent sense of humor.

On a recent visit to the artist’s sunlit Bernal Heights home in San Francisco, which gleamed white like a freshly painted spaceship, there was a speckling of lilacs and golden poppies that lead through the garden to his next-door studio, which Nagle affectionately calls his “cocoon.” Seated there, sporting an all-white outfit, with a book on Korean ceramics in hand, Nagle answered T’s Artist’s Questionnaire.

I get up, have breakfast, take the dog for a walk. In the old days, it was close to a 9-to-5 in the studio. Now, with increased success — I hate these words — I’m busier. My main part of the day, my peace of mind, my “this is what I do because I gotta do it” is being in the studio as much as I can.

I usually order dinner out because my wife and I don’t like cooking. And then around 6 o’clock we watch MSNBC — to see if Trump’s still in office. Scary times, man. I hope you’re not a Republican. She’ll want to watch Rachel Maddow for the second time and I’ll move into the bedroom and watch “The Voice” or “True Detective” or “Ray Donovan.” If nothing’s on, I’ve been known to watch “MacGyver” or “Hawaii Five-O.” They’re reviving all these old shows. I’m a big nostalgia and trivia freak.

How many hours of creative work do you think you do in a day?

Other things take up space in my head, but the work never leaves my mind. I’m always looking, thinking, taking pictures with my phone — of a splat on the street or a ship bow down at Mission Bay. I pretty much remember everything — or I’ll bark it into my recorder. But if we’re talking hands-on-the-material, drawing or whatever the case, I’d say six hours. 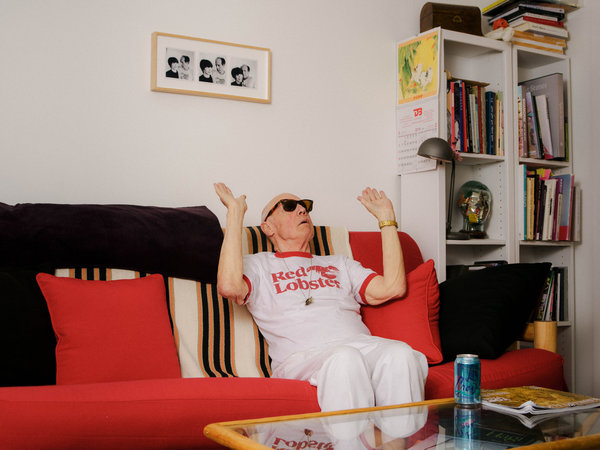 What’s the first piece of art you ever made?

I made a bust in high school. I put it in the kiln and it blew the side of its head off. I was going to throw it away and a friend of mine said, “Oh no man, that’s really cool.” I’ve been making stuff since I was a kid. My mother told me I had no talent, she was like, “What do you want to do that for?”

What’s the worst studio you ever had?

Probably the basement of the building next door, where my daughter lives now. Dirt floor. Funky.

What’s the first work you ever sold? For how much?

There’s a sculpture from 1958 that Scripps College owns, “Perfume Bottle.” It’s a big jar with a kind of tombstone stopper. Peter Voulkos brought over a collector who was a math teacher at Scripps and he bought it for $100.

When you start a new piece, where do you begin? What’s the first step?

I draw a lot, that’s really the beginning of it all. I draw in bed, usually watching a Charlie Chan movie. The drawings are very small. I’ll put them on a copier and blow them up to get a general picture of what they’ll look like at a certain scale. And then I start building the models at full scale, at six inches max. I can envision things, to a degree, three-dimensionally. I’m not saying I have visions, but some little idea will come popping into my head. It might be based on something I’ve seen, and subconsciously it finds its way onto paper.

How do you know when you’re done?

When it feels right. I’m a big advocate for letting the works sit. I look at them, leave them around for a while.

How many assistants do you have?

My assistant, Whitney, is the only person that gets in here. And she does all the stuff business-wise and is also great in the studio.

What music do you play when you’re making art?

R&B, Motown, music of Philadelphia from the ’70s, like Gamble and Huff. I try to keep current with pop music, most of which I hate. But I’m into electronic dance music and people like James Blake, Frank Ocean, Kendrick Lamar. I like sad music. I don’t like to feel sad — I hate it, in fact, it’s awful — but I’m drawn to melancholy music.

When did you first feel comfortable saying you’re a professional artist?

I’ve never used the word “professional,” although that’s what I am. To a large degree, it’s too much. I know there’s a certain amount of allure or pretense — depending on where you’re coming from — when you say that. When you say “professional artist,” people automatically assume it’s painting. Then I say, “I make small sculptures.” I’m very reluctant to use the word “ceramics” because ceramics for years had such a bad reputation. The best people working in clay do not declare themselves clay artists.

What’s the weirdest object in your studio?

A picture of Bill Cullen, who was a ’50s, ’60s and ’70s radio and TV host. There’s also a picture of a woman surrounded by cheese.

What do you do when you’re procrastinating?

I don’t think I know how to procrastinate. It’s not a matter of principle. I would love to, love to, but I can’t do it. I always feel like I gotta make something.

What’s the last thing that made you cry?

I just had major surgery, about four weeks ago. I won’t offer to show you my scar. The worst part of the experience was something I hadn’t heard of before: postoperative delirium. I was so scared. It was like a dream, everything going in and out of focus. I was in two different worlds. I was on the phone bawling my eyes out. My wife and I were declaring our love.

What do you usually wear when you work?

I’ve got overalls like Willem de Kooning used to wear in the ’50s. I saw a picture and thought, I gotta wear that, it’d make me a better artist.

Which artists have influenced your work?

What are you reading right now?

I could do a whole thing on losing my hair — you got 15 minutes?

What do your studio windows look out on?

I have skylights all over the place, so I could say the sky. The new studio looks out over my garden. I have a piece of quasi-Japanese garden sculpture I made with topiary and a slab of rock.

This interview has been edited and condensed. 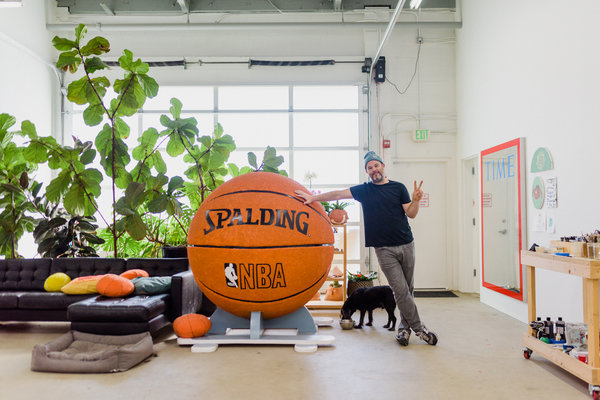 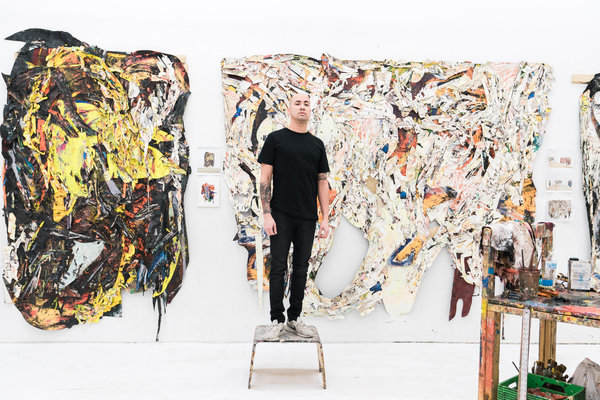