In “Non Solus,” a dancer becomes an acrobat, and an acrobat becomes a dancer. Recirquel Company Budapest may be a circus company, but its meditative, evening-length production is no circus spectacle. It’s more like ballet in the air.

“It’s not a story of two men,” said Bence Vagi, the work’s choreographer and director. “It’s a story of the body and the soul, or the mirrored image of ourselves.”

“Non Solus” (“Not Alone”), which comes to the Brooklyn Academy of Music beginning Thursday, brings to life a dreamlike world that evokes, with aerial feats of daring, the cycle from birth to death. In the show, set to a score that includes electronic music and Bach, the acrobat Renato Illes sees himself as the soul to the body of the dancer Gabor Zsiros. “But at the end,” Mr. Illes said in an email interview, “just like in life, the body perishes and the soul keeps on wandering alone in ethereal space.”

Working on this piece has changed him. “It has strengthened me in my belief that you do not always have to do very dangerous tricks,” he said. “They might make you an outstanding acrobat, but will not make you a great performer.”

By taking two types of performers and two traditions and melding them together, Mr. Vagi has given dance a powerful athleticism and circus movement a subtle and supple fluidity. But beyond the piece itself, “Non Solus” asks a bigger question: What can the dance and circus worlds teach each other?

“When we look at ballet from the 1920s to today, we see huge progress,” Mr. Vagi said. “This is happening now in circus because schools in Montreal, in Belgium or even in Budapest have started to give more dance and movement classes to circus artists. So they start to find the freedom of movement, which enables abstraction, and abstraction can form more story.”

There is a loose narrative in “Non Solus,” which Mr. Vagi sees as more than an ordinary duet. “It’s a show with only two people, but actually the set multiplies everything,” he said. “It is constructed with mirrored walls that face or tilt toward the audience. So it always reflects an image of the choreography.” 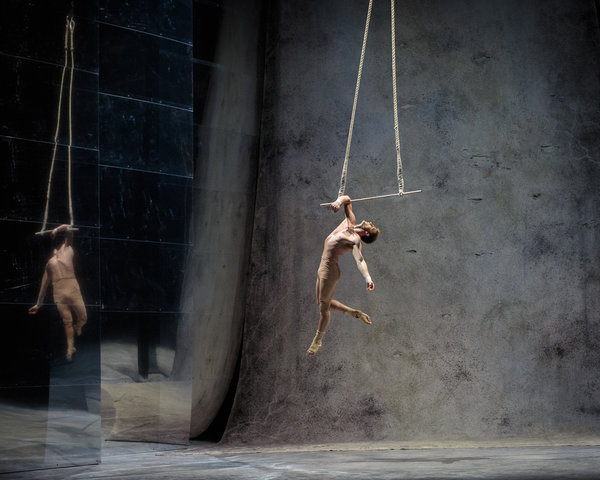 And that creates something familiar to anyone who’s experienced the circus: a 360-degree vantage point, which carries with it the sensation of a ring.

Mr. Vagi, 38, grew up dancing and choreographing — he studied ballet and was also influenced by Bob Fosse — but as he grew older, he immersed himself in the artistry and history of circus and cabaret theater. He never was a member of a circus company, but he spent time researching circus freak shows, and was particularly drawn to the work of Tod Browning, who directed the 1932 film “Freaks.”

Mr. Vagi directed dance shows that were inspired by circus themes, but he said “I never had circus artists — I just created scenes that had the atmosphere of circus.”

Gradually, he began to incorporate circus artists in his pieces and made his way — his own way — to the ring. Recirquel, his dance-circus company based in Budapest, is now in its seventh year.

In a phone interview, Mr. Vagi, in Budapest, spoke about the thrill of live danger, the importance of grip and what dance and the circus have in common. Sadly, but unsurprisingly, one thing is the backstage misery. “The suffering is the same,” Mr. Vagi said. “The amount of hours. Your understanding of the body, the respect of the body. The life.”

Here are edited excerpts from the conversation.

For a dancer, what is the main challenge in acrobatic and aerial work?

It’s the grip. You have somebody’s life in your hands. You can’t fail. You can’t let go of that person. Of course, there is a period where you have big mats, but then they are removed and in that moment you take responsibility for that other person’s life.

This art form is so dazzling for audiences because it always carries this live danger. In opera or in dance, how can you feel such fear? In circus, you see performers doing things that you think are not possible to do. They are superheroes.

What is the difference between dance and circus, and what do you find similar?

I feel the answer, but to describe it is not easy. From my perspective, both are theater genres, and the beauty of theater is communication. Circuses are becoming more and more an art form that can speak like dance, and this is very beautiful because it’s opening a new perspective.

The vocabulary of dance is much more broad because there are so many different dance styles, and the variation of movement is endless. When you look at circus and you are on a tightrope 10 meters high, your vocabulary is much more limited. You can’t let go, you can’t close your eyes, you can’t just spin: You need to keep your balance aligned because your life is at stake. That never happens in dance. You can get injured, but your life is not really at stake.

How did “Non Solus” come to you?

I was in Chile at the Atacama Desert watching this really incredible sunset. Deserts are really similar to theaters — it’s a huge empty place. You’re left alone with your thoughts. You see this red sand turn even redder by the sun and suddenly there is no one around you. It brings you back to some sort of ancient feelings of humans. “Non Solus” is this.

What was the working process like for you and the performers?

A lot of crying. In the end, it’s like, “I’m not a dancer, I know I look stupid, I don’t want to become a dancer!” [Laughs] There was a lot of insecurity. In a way, the whole piece is about letting go of your ego and finding your own faith. Only when they let go does the show start to work its magic.

How difficult is the partnering?

When I see productions that say they’re doing contemporary circus and deny liking classical circus, but in the end that’s what they do. They just put a new piece of music or change the costume.

It’s beautiful. I love it. It’s a very ancient art form and you have to understand all of it in order to be able to think about it differently. Honestly, I don’t like the tag “contemporary circus.” When people ask me, “What do you do?” I always respond, “We do circus.” Even in this show, we have the mirrors and this 360-degree perspective, so the ancient magic of circus comes back to us.

Yes, you can do something new, but you can’t let go of everything that is there: You need to respect it.