The first fictionalised account of Theranos founder Elizabeth Holmes is just around the corner – and the tense trailer from Hulu’s new TV series The Dropout shows a remarkable transformation.

At the end of 2021, the news dropped that Jennifer Lawrence will be taking on the role of disgraced Theranos founder Elizabeth Holmes in a forthcoming Apple Original biopic, Bad Blood. Once dubbed “The Next Steve Jobs”, the Silicon Valley entrepreneur had a spectacular fall from grace after her revolutionary health technology company was infamously exposed as a scam.

Before Bad Blood hits the big screen, though, we’ll get to see another award-winning Hollywood star take a turn as Holmes: Amanda Seyfried. First announced in 2019, Hulu’s upcoming TV series The Dropout is just around the corner – and today, we have a first glimpse at Seyfried sporting the signature black turtleneck in the tense series trailer.

The Dropout: Amanda Seyfried as Elizabeth Holmes and Naveen Andrews as Sunny Balwani

The tense two-and-a-half minute clip paints an image of a woman unravelled by her own ambition. As we watch Seyfried’s Holmes move from the disheveled halls of Stanford University to the glossy covers of Forbes magazine, we see clearly how desperation to do and be something great leads down a murky path of corruption and, ultimately, destruction.

“This isn’t just my job, it’s who I am. Whoever doubts my company doubts me,” Holmes tells her doubting investors, and it becomes clear that Theranos’ success isn’t just a matter of life or death for the millions of patients it could have helped, but Holmes herself.

Watch the thrilling trailer in full below.

According to Hulu’s official description, the show follows “an unbelievable tale of ambition and fame gone terribly wrong. How did the world’s youngest self-made female billionaire lose it all in the blink of an eye?” 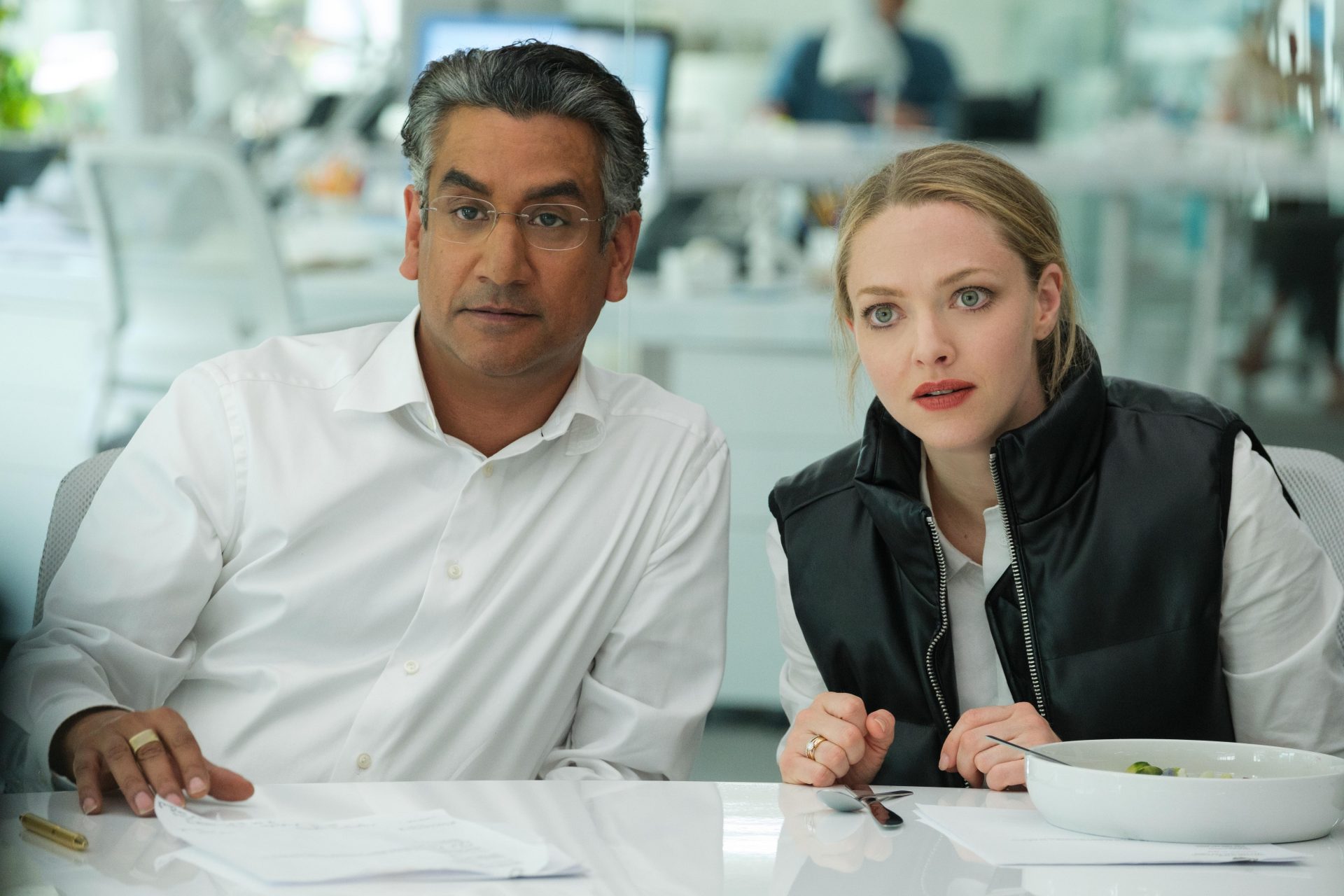 The Dropout: Amanda Seyfried as Elizabeth Holmes and Naveen Andrews as Sunny Balwani

Parts of the scandal, of course, have already been well-documented in the press. Once considered the youngest self-made female billionaire, Holmes’ company claimed to accurately perform dozens of tests using just a drop of blood. But after reports surfaced that the finger-prick technology might be fraudulent, Holmes’ company and reputation came crashing down. At present, she’s standing trial on numerous charges of wire fraud and conspiracy to commit wire fraud; and if convicted, she faces up to 20 years in federal prison.

In the four new images from the show, we see Seyfried donning Holmes’ instantly recognisable uniform: red lipstick, messy updo, and the all-black ensemble that she was known to wear while working at Theranos.

We don’t have long to wait to see Seyfried in action, either. The first three episodes of the series will be available to stream on 3 March exclusively on Disney+, with new episodes streaming weekly.  We can’t wait to see how Seyfried fares with Holmes’ deep baritone.