First, you notice the fun, high-tech stuff: the digital billboard overhead that shows dogs of different shapes and sizes scampering across the screen. And then the “Find Your Match” kiosk that snaps your picture and shows you which type of purebred dog you most resemble. (Me: a sloughi, a somewhat obscure cousin of the greyhound.)

Next, you notice the historical artwork. Visitors are greeted by two paintings considered classics of a genre that most people have never heard of: dog art. One is “Leda,” a 1906 portrait of an English setter by the American artist Percival Leonard Rosseau, who often painted dogs like this one from his hunting kennel. Another is “Salukis,” an 1807 depiction of boisterous hounds with flying ears by the British artist James Ward, who typically painted the dogs, horses and children of his wealthy patrons.

The American Kennel Club Museum of the Dog opened in Midtown Manhattan on Feb. 8, right before the club’s Westminster Dog Show was about to start, and dog lovers have responded. “It’s crazy — we’ve been packed,” said Alan Fausel, the museum’s executive director, an auction house veteran whom the American Kennel Club hired last year. On Sunday, Feb. 10, he said, 500 people attended a private brunch at the museum, and 800 paying visitors came in the afternoon.

The museum dates to 1982, when the American Kennel Club began showcasing art from its collection at its headquarters in the New York Life Building. In 1987, as the volume of visitors and artwork grew, the museum moved to the outskirts of St. Louis, where it resided for decades. Now, it and the club have relocated to an office building at Park Avenue and 40th Street, with the museum occupying an airy, modern storefront on two floors. 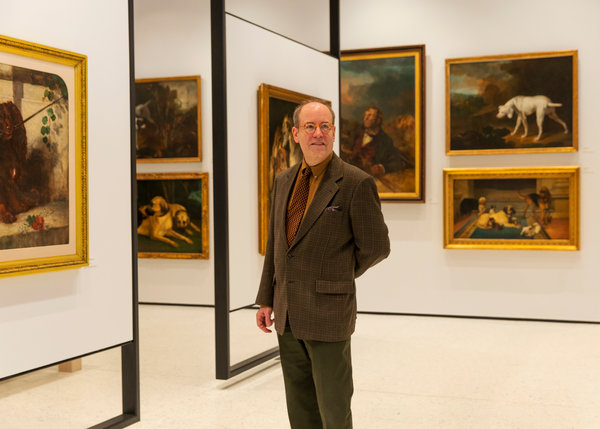 “The museum is very accessible, and we expect in its new location it will attract a lot more visitors,” said Mr. Fausel, who has a Welsh springer spaniel named Gemma. “Some museums may seem too highbrow, but with the Museum of the Dog, you can just pack up the family and go.”

On a tour, Mr. Fausel pointed out the crowd-pleasing attractions, like a virtual-reality station that lets you “train” Molly, a digital dog. But his face lit up when he showed off the fine-art exhibition he has curated, which includes such classics as “The Totteridge XI,” an 1897 painting of 11 smooth fox terriers by the British artist Arthur Wardle, and “Silent Sorrow,” a 1910 painting of Caesar, the wire fox terrier who was a favorite of King Edward VII of England. Caesar, who is shown resting his head on his late master’s chair in apparent mourning, was painted by Maud Earl, a British-American painter who is considered one of the leading lights of the dog art world.

Edward VII’s mother, Queen Victoria, set off a craze for dog paintings within the British aristocracy, starting in about the 1840s, said William Secord, an expert on the genre, who owns an art gallery in New York and a Dandie Dinmont terrier named Rocky. “She would have as many as 75 dogs in her kennels, and she would commission artists to paint the ones who were her favorites,” said Mr. Secord, who was the founding director of the American Kennel Club’s museum in the 1980s. “What the queen did, everybody wanted to do,” he added.

Mr. Secord said that dog paintings could be broken down into categories: pet portraits (which he described as “all about the dog on the cushion”); sporting scenes, like hunts and chases; and purebred portraits, meant to show off the ideal features of each breed. “Most laymen look at a painting of a dog and think of it almost as a photographic depiction of the way the dog looked,” he said. “That’s not necessarily the case.”

While the American Kennel Club is considered to have the world’s largest collection of dog art, the Kennel Club in England is most likely the runner-up, and its gallery in London is open by appointment only. Not surprisingly, it specializes in British artists. The most popular painting it has on display is an 1831 portrait of a Newfoundland, titled “A Distinguished Member of the Humane Society,” by Sir Edwin Landseer, a favorite artist of Queen Victoria (and who also did the lion sculptures in Trafalgar Square). The painting is on long-term loan from the Tate Britain.

“When the portrait style became popular in the Victorian era, the breeds that were painted were the ones that were popular among the wealthy owners,” said Luisa Foster, a curator of the Kennel Club Art Collection. “A lot of terriers were painted, and gun dogs like Irish setters and pointers.” Cavalier King Charles spaniels, which were bred to be lap dogs for fine ladies, also rose to prominence at this time.

In the United States, enthusiasm for dog portraits was ushered in by Geraldine Rockefeller Dodge, an arts patron whose estate in New Jersey, Giralda Farms, included hundreds of dogs, said Dennis B. Sprung, president and chief executive of the American Kennel Club. “She would bring artists from around the world to live in residence for a number of years and paint every one of her dogs,” he said. She also held an annual dog show, one that is “replicated once every five years by dedicated fanciers,” said Mr. Sprung, who is partial to Afghan hounds.

Paintings are only one component of the Museum of the Dog’s collection. It also has photographs, fancy collars and show trophies, including one from Tiffany. A striking 34-foot-tall vitrine, all glass and rectangular, contains a collection of porcelain figurines.

Among the visitors at the AKC Museum of the Dog on a recent Friday was Sydney Daldry, a 17-year-old from London, who was there with her parents and siblings. She bought a $245 stuffed dog at the museum’s gift shop: an English bull terrier made by Steiff, in honor of the type of pet her family was about to adopt. “As we are big dog people, we were interested in coming here,” she said. “The artwork is really lovely, and we loved looking at all the books.”

Simba Original Hybrid Mattress review: save 40% until May 31st