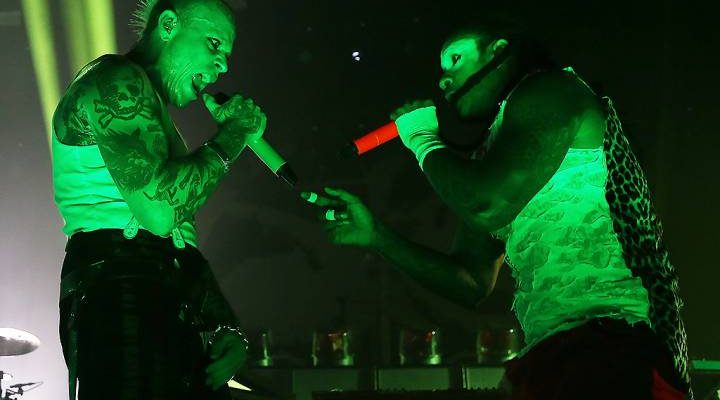 Now that we’ve passed the peak release date for new Christmas albums (that tends to be the last Friday in October so artists can fight for playlist space for radio stations that flip to an all-Christmas format around this time), we can focus on non-seasonal material.

1. The Prodigy, No Tourists

For a while back in the late 90s, it looked as if The Prodigy and their ilk were going to wipe guitar-based music from the face of the earth. That didn’t happen, of course, but albums like The Fat of Land did a lot when it came to the rise of EDM in this century. Longtime Prodigy fans will find many familiar sounds on this album, although I will throw up a mild caution to anyone about to press play on this single. You will subject yourself to a dangerously invasive earworm that may linger for hours. You’ve been warned.

Barbra Streisand is not a fan of Donald Trump. With her new record, she skewers him over lying, his view of fake news, and, yes walls, assuring that this album will be banned from the West Wing. Babs hasn’t released an album containing mostly original songs since 2005, so it appears that she used Trump to conquer some writer’s block. Politics aside, if you’re a Streisand fan, there’s a lot to like with this album: great vocal performances, wonderful musical arrangements and a couple of fine covers, including Louis Armstrong’s What a Wonderful World and Imagine from John Lennon.

Dan’s been quiet over the last couple of years, although there was a single back in February. Here’s how he describes his fifth album: “It’s about witnessing birth, and in some ways, rebirth. It’s about feeling disconnected from a popular identity and becoming acclimated to a new one. It’s about raising kids in a turbulent world. It’s about unanswerable questions and kinds and friendship and fear.” Sounds like someone needs a hug. I have a feeling that a lot of people will be able to identify with these sentiments.

When Jack Black and Kyle Gass came up with the idea of Tenacious D in 1994, they never thought that the schtick would still be alive after 24 years featuring four albums, one TV series, and multiple headlining tours. Note, too, that Dave Grohl serves as the band’s drummer for this record. Is this metal? Comedy rock? Acoustic goofiness? Don’t overthink it. Just start slow with the strange animated vignette series that goes with the record. Just pay attention to the warning at the top of this video.

Streaming music services exist for bands like Dead Can Dance. With a history of esoteric-sounding albums going back to 1994, streaming allows anyone to sample all their material, from the ultra-gothic to the oddly medieval to the lovingly produced electronica. Dionysus, their first album in six years, is named after the Greek god of wine, so it’s important to have a nice glass of Xinomavro as you listen. (Not a fan of Greek reds? Then try a Moscofilero.) Here’s a taste.

Coming from Newcastle in England’s northeast, P x 7 consists of five guys deep into Sabbath-ish riffs who seem to have found purchase with a number of British music critics. Lots of four-star reviews for material like this.

A four-piece based in Berlin led by two Canadian ex-pats. They don’t have a lot of material yet, but what I’ve heard sounds promising.

While the whole world was mad for grunge in the early 90s, there was a segment of the alt-rock universe that was transfixed by a red-haired woman at a piano providing some much-needed balance to the heaviness of male-dominated heaviness back them. Tori continues to make music — her 15th studio album was released last year — as she and her family divide their time between homes from Florida, the U.K. and Ireland. This single from her second album, Under the Pink, was a big alt-rock radio in the spring of 1994.