Dana Schutz was readying her coming gallery show, and chaos reigned on the walls of her Brooklyn studio. Her new works offered the painter’s signature scenes of anxiety and mayhem.

In “Presenter,” a female speaker at a TED-style event, with her underwear down around her ankles, tried to pull her own face off. “Treadmill” depicted a woman with a fishlike head flailing away on an exercise machine. And in “Painting in an Earthquake” an artist in front of a canvas held a brush as a brick wall before her shook violently.

“She’s trying to hold the room together, and the painting is falling,” Ms. Schutz said of that figure.

Thirteen paintings, along with five bronzes that represent her first foray into sculpture, are in Ms. Schutz’s show, “Imagine Me and You,” which opens Thursday at Petzel Gallery in Chelsea.

But with “Painting in an Earthquake” it is hard not to see Ms. Schutz’s recent history, too, given the art world earthquake she lived through and the tremors from it that are still being felt.

Her painting “Open Casket,” shown in the 2017 Biennial at the Whitney Museum of American Art, drew sustained protests for its portrayal of the corpse of the black teenager Emmett Till, who was lynched by two white men in 1955 and whose death helped spur the civil rights movement.

There were calls for the painting’s removal, and some demanded its destruction.

Now, Ms. Schutz admits that she is “guarded” about the controversy and is most wary discussing her motivations for painting the scene in the first place, saying only that it was an attempt to “register this monstrous act and this tragic loss.” But she acknowledged that may have been an “impossible” task. 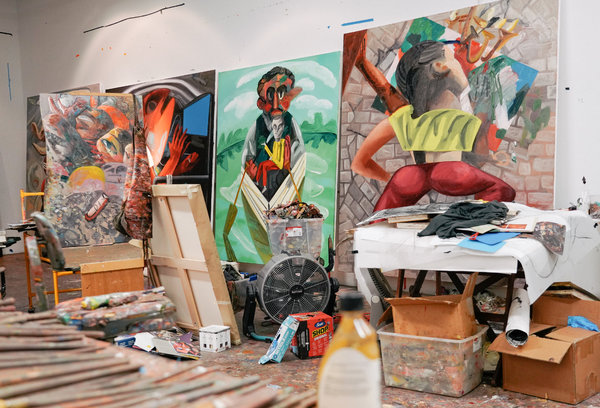 When asked if she regretted making the work, she paused and said, “No, I don’t wish I hadn’t painted it.”

The long-term effect of the controversy, she said, is that she has internalized the viewpoints of the protesters even when making new work.

“I’ve had so many conversations with people who were upset by the painting,” Ms. Schutz said, adding that she has included them in “my imagined audience when I’m painting. It’s good those voices were heard.”

Ms. Schutz, 42, established her reputation with expressionistic compositions featuring figures that seemed to be pushing at the edges of the picture planes with their limbs akimbo, barely skirting — or is it courting? — disaster.

Either way, emotion and empathy seem to drive her work. “I’m interested how something feels, rather than how it looks,” she said at her studio, explaining her approach.

But the debate over “Open Casket” — and a subsequent controversy over the Walker Art Center’s handling of “Scaffold,” by the artist Sam Durant, which evoked in part the hanging of 38 Dakota Indian men in Minnesota in 1862 — raised challenging questions for the exhibition of art in museums and elsewhere: Who has the right to tell certain stories, empathetically or not? Is it appropriate when a white artist recasts one of the most influential images of all time — Till’s mutilated body — or is it cultural appropriation?

(Ms. Schutz said her painting was not of the historic photograph but “has more to do with other paintings,” including Ben Shahn’s “The Passion of Sacco and Vanzetti,” a work of social protest from 1931-32.)

Even Ms. Schutz’s ardent fans, including Gary Garrels, the senior curator for painting and sculpture at the San Francisco Museum of Modern Art — who called her an “exceptional colorist” — said the debate was a “wake-up call” for the art world, adding that the salient question for an artist now was, “To what degree do you take for granted your own perspective?”

In person, Ms. Schutz, smiling and casually dressed in a sweater and jeans, seems an unlikely art-world lightning rod. She grew up in Livonia, Mich., and studied at the Cleveland Institute of Art before getting her M.F.A. at Columbia University. She comes across as determined, if prone to self-doubt.

She said that she wasn’t sure, when tackling sculpture for the first time, whether the works would be successful or “just fall down.” Asked if she was the painter portrayed in “Painting in an Earthquake,” she demurred. “With a lot of the paintings, they’re obviously probably pretty personal,” she said. “But I wouldn’t say they’re autobiographical.”

On the subject of “Open Casket” she seemed aware that to act too chastened might come across as courting unearned sympathy; to be defiant would add fuel to the fire.

“I definitely feel conflicted about it and very bad about it,” she said.

Known for her inventive and muscular way of shaping space on canvas to build what her friend, the painter Cecily Brown, called “bulletproof constructions,” Ms. Schutz spoke about the controversy in spatial terms.

“The painting is what it is,” she said. “And then there should be space for other people to say what they want to.”

It was the decision of Ms. Schutz and the Whitney to keep the painting on the walls after an artist, Parker Bright, called it a “black death spectacle.”

“I felt that people could see it for themselves and make up their own mind,” Ms. Schutz said.

It wasn’t just the protesters who thought it should come off view. Zach Feuer, Ms. Schutz’s former dealer, said, “I told her she should take it down and cede the space.”

Mr. Feuer, who has since closed his gallery, said that Ms. Schutz — who decamped to Petzel Gallery in 2011 — “was made an example of, but I don’t think it was incorrect to do that. We’re not above criticism.”

But he added a sentiment echoed by many in the art world: “I feel bad she’s the one it happened to.”

“Open Casket” is tucked away in Ms. Schutz’s possession, unlikely to see the light of day anytime soon.

“When there were suggestions for the painting’s destruction, I took that as a call for it to be out of circulation,” she said. “I wanted that, too. The painting was never for sale, and I didn’t feel like it was appropriate for it to circulate in the marketplace.”

GROWING UP IN SUBURBAN Michigan, the only child of an art teacher and a guidance counselor, Ms. Schutz showed an early independent streak.

Around 7 years old, she began striking off on her own, taking walks into the woods or to the pet store. “I think about it now, and I think, ‘That’s insane,’” said Ms. Schutz, who is married to the artist Ryan Johnson. Based in Brooklyn, the couple have two young children, and Ms. Schutz has been experimenting with schedules to come to the studio very early or very late, when they’re asleep.

Mr. Garrels, who has acquired her works for SFMoMA, said that Ms. Schutz has “a ferociousness in her, but a vulnerability at the same time. This is an artist who wears her heart on her sleeve.”

Ms. Brown, who was doing visiting critiques at Columbia when Ms. Schutz was a graduate student, said that to this day, she is “madly jealous of the absolute clarity of Dana’s paintings.”

Perhaps it was a natural evolution that led her restless painted figures to finally burst through the picture planes into sculpture. For these forays — the first since some “very bad collegiate attempts” — she made drawings, and then sculpted in clay before having them cast in bronze.

“It felt so new,” she said, pointing to “Washing Monsters,” a companion piece to the painting of the same title. In both depictions, a man stuck on a mountaintop is being awkwardly hugged by a monster with a face like an animal skull.

She added that she enjoyed solving a three-dimensional problem like, “How do you make a soap bubble out of clay?”

Reto Thüring, who put on a solo show of Ms. Schutz’s work in 2018 for the Cleveland Museum of Art, and is now the chairman of contemporary art at the Museum of Fine Arts, Boston, pointed to how “her work has become more layered over time.” He added, “There’s more variety in how the paint is applied. It has become almost sculptural.”

The blowback from the Whitney controversy has followed Ms. Schutz to her 2017 solo exhibition at the Institute of Contemporary Art, Boston, as well as the Cleveland exhibition.

“We received negative feedback” for showing her work, Mr. Thüring said. “And I welcomed that. It was a learning experience for us.”

For her part, Ms. Schutz seemed resigned to the fact that the debate over “Open Casket” was “not quite resolved.” Setting out on new adventures — not so different from when was 7 — seems like the only way forward.

“Painting itself kind of actually felt more urgent, after all that,” she said of the last two years. “It was a relief where you just felt grateful to be able to paint. For me at least, that feels like the only way to get through something.”

Imagine Me and You 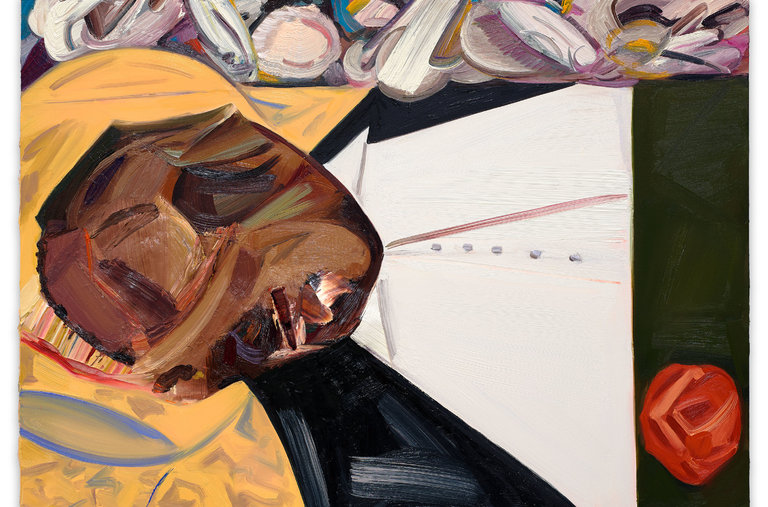 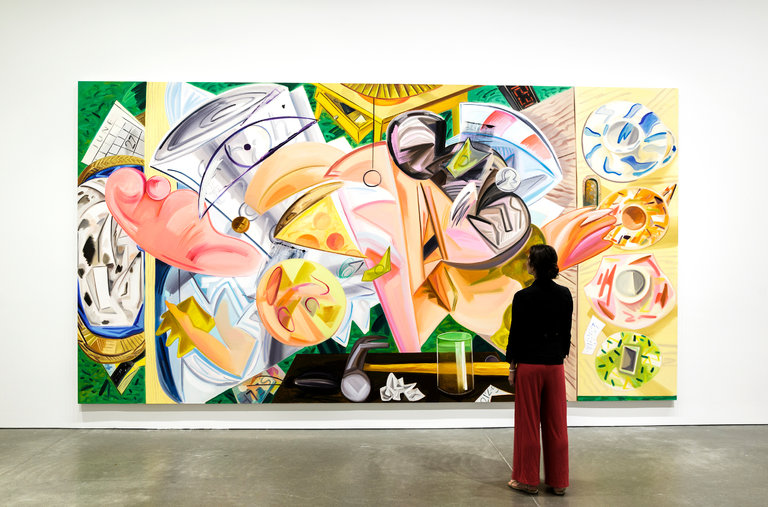 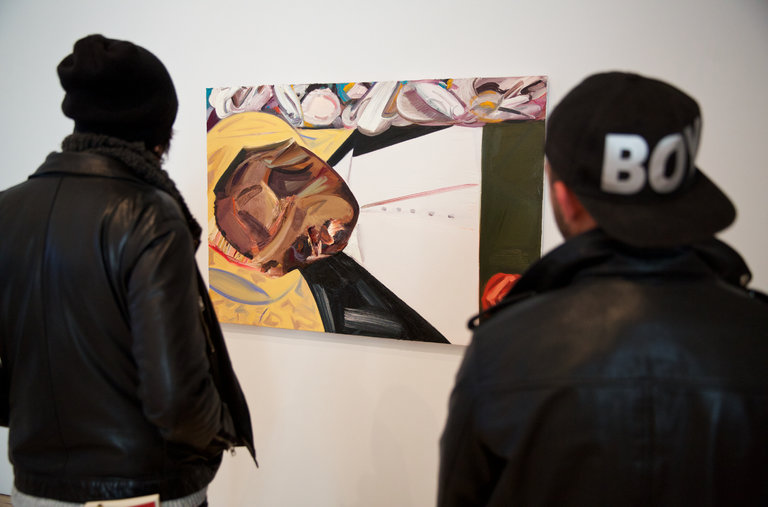