On a recent morning, the guy mopping the bar in Chelsea was wearing a suit and tie.

The man, Kevin Carr, had a job interview later that day. But he did not want to neglect his current part-time job — one of several — cleaning and prepping the bar before its doors opened hours later.

Mr. Carr has always hustled, which served him well in the world of video production. At 20, he moved from New York to Los Angeles and broke into the industry, landing prominent work as a creator, producer and distributor of commercial video projects. His employers included The Associated Press and On the Scene Productions, which worked for companies like Nike and entertainers like Billy Joel.

In 2016, Mr. Carr took a job as a production manager at Thomson Reuters and moved to New York City, settling in Prospect Park South with his dog, Serena, an Australian cattle and beagle mix.

“The move was really exciting for me,” he said. “I’m a New Yorker at heart. Coming back was kind of like coming home.”

But just a few months later, he lost his job in a layoffs companywide that hit 2,000 employees.

“I wasn’t prepared,” Mr. Carr said. “I didn’t have a safety net. I found myself in a situation that was very frightening.”

When no job leads came to fruition, Mr. Carr entered unemployment limbo. His funds dwindled, his sleep turned fitful, and he started rationing his food.

His desperate circumstances brought him to a nearby food bank, where he found solidarity and friendship with others in the line.

“I met so many tremendous people there who are in situations like mine, living paycheck to paycheck,” Mr. Carr said. “I’m just one of many going through this.”

Some of those people convinced Mr. Carr to reach out for help from Catholic Charities Brooklyn and Queens, one of eight organizations supported by The New York Times Neediest Cases Fund.

“Asking for help is not the easiest thing for me,” he said. “But I did what I had to do.”

With the help of the charity’s staff, Mr. Carr was approved for a one-time emergency grant of $11,867.50 from the city’s Human Resources Administration to clear his rent arrears. Catholic Charities Brooklyn and Queens used $1,291.56 in Neediest funds to cover the rest.

“My goal is to have security and peace of mind,” Mr. Carr said. “I’m a pretty simple guy.” 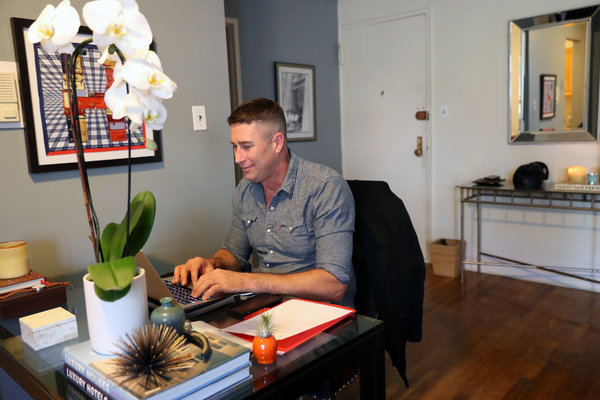 Staying busy has been critical to his sanity. When he is at home with nothing to do, he rearranges his living space instead of sitting still. That restless nature sustains him as he juggles three part-time jobs.

Mr. Carr reports to overnight shifts at a laundry service, delivering uniforms to companies around Manhattan and Brooklyn; he works part-time day shifts at a frame shop; and he occasionally spends a couple of hours tidying that bar in Chelsea. Sometimes he earns money as a dog walker, exercising neighbors’ pets and giving Serena extra company.

“At the end of the day, I’ve accomplished something,” Mr. Carr said of his busy schedule. “I feel good. I sleep very well.”

His erratic schedule allows him the flexibility to apply for jobs and take interviews. He said those part-time responsibilities also have helped maintain his self-confidence.

“It doesn’t matter what you do,” Mr. Carr said. “It doesn’t define who you are. I’m the same person I was. Before, I was interviewing A-list celebrities on the red carpet. Now, I mop floors.”

Still, he would like to return to the industry where he thrived in the 1990s. He enrolled in a multimedia storytelling class at New York University to increase his skill set. Once he has a full-time job again, he also hopes to carve out time to volunteer, maybe at a food bank.

“What matters is who I am as a person, how I treat others,” Mr. Carr said. “Not what I do or what my business card says.”