LOS ANGELES — It certainly didn’t feel like a gallery opening. There was no crowd. No wine and cheese. Only a few people were allowed in at a time because of Covid-19 restrictions.

But despite the challenge of opening a new gallery devoted to largely-unknown African artists during a pandemic winter, Adenrele Sonariwo exuded an aura of serene resolve. She had succeeded in bringing to the United States a branch of the Rele Gallery that she founded six years ago in Nigeria, making it perhaps Los Angeles’s first contemporary gallery from the world’s second-largest continent.

“We’re doing the artists a disservice by just being in Lagos,” Sonariwo, 34, said at her compact gallery on a commercial stretch of Melrose Avenue. “It’s one thing to see the artwork on social media or online. But these artists have such amazing techniques that I felt it was really important to have people see them in person.”

At a time that African art is moving into cities like New York and London (with the 1-54 Contemporary African Art Fair, for example), Sonariwo is becoming an influential player by trying to give emerging artists a global platform.

“Adenrele Sonariwo is an incredible social entrepreneur,” said Ugochukwu-Smooth C. Nzewi, a curator at the Museum of Modern Art who specializes in African art. “She is arguably the most important advocate of contemporary Nigerian art. Her passion in promoting emerging artists and particularly women artists is commendable.” He added that the new gallery “is part of her long term goal to draw international attention to a strong pool of emerging talents in Africa.”

The art world at large does not yet seem aware of Rele Gallery’s arrival here. But those who have learned of its presence have welcomed it.

“It’s a gallery from Lagos that wants to show more artists who are working on the continent,” said Marla C. Berns, the director of the Fowler Museum at U.C.L.A. “That in itself is an accomplishment.” 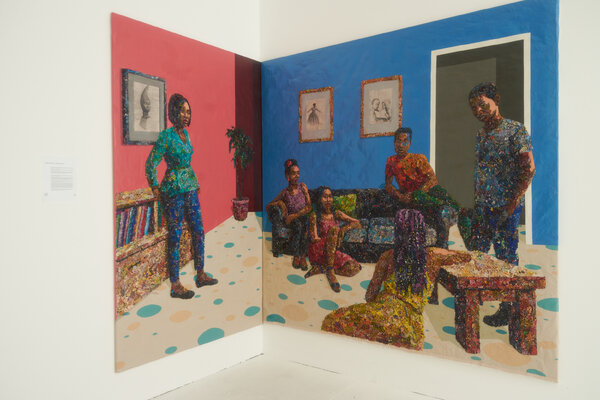 Berns said she was grateful that Sonariwo had exposed her to this new roster of talent: Marcellina Akpojotor, who uses scraps of fabric in her collaged paintings; Tonia Nneji, who makes work related to her own medical condition, polycystic ovary syndrome; and Chidinma Nnoli, who explores elements of identity, sexuality and mental health.

“I did not know anything about them until I saw their work,” Berns said.

Though currently on the lower end of the art market — the paintings in the show range from $12,000 to $20,000 — these artists have captivated collectors (the entire show quickly sold out), who found Sonariwo equally compelling.

“She’s young, she’s attractive, she’s very smart,” said Liza A. Vassell, a local public relations executive who said she had bought an Nnoli in the show. “I like supporting Black women who are doing amazing things,” Vassell added, “because I’m a Black woman who knows what it’s like and how hard it can be.”

Given that work by Black artists is a hot collecting category, it likely won’t be long before the artists surfacing here get snatched up by larger galleries. But Sonariwo said that she was glad to help bring more talented African artists into the mainstream and that she had already discussed collaborating with the dealer Marianne Boesky, whose recent group show, “In Situ,” featured Nnoli.

Boesky said the young gallerist reminded her of her own beginning in the field. “I love her global ambition,” Boesky said. “She’s already in L.A., she is taking her artists on the road and that’s what I did. ”

Boesky added that she had offered to do a solo project of Nnoli’s work in 2022, though she was not ready “to announce any representation yet.”

“She can work in one of our smaller spaces. We can go from there,” Boesky said, mindful of how a fast rise can put too much pressure on an emerging artist. She said she would keep Nnoli’s prices “low enough so people who want her work in Nigeria will still be able to afford it. We don’t want to price them out.”

Sitting in her gallery on her first day of business, Feb. 1, luminous even behind her mask, Sonariwo said she preferred this quieter version of an opening to the usual crush of people. “We can actually talk and hear each other,” she said.

Her only frustration, Sonariwo said, was that Covid restrictions kept the artists from traveling to the U.S. “to experience how people are experiencing their work.”

Born in Washington, D.C., into a Yoruba noble family, Sonariwo at 4 years old moved with her parents back to their homeland outside Lagos, so that her father could fulfill his duties as a traditional ruler, presiding over 33 towns and villages. Her mother was a distributor of consumer goods and appliances.

Because Nigerians of her background are expected to become doctors or lawyers, art initially did not seem like an option for Sonariwo. So she studied accounting at Howard University, graduating in 2007, and began her career at PricewaterhouseCoopers, now called PwC.

But Nigeria drew her back (most of her 17 siblings are there), as did the artists she began to discover by visiting their studios and seeing their work on line.

In 2015, she opened her gallery and quickly attracted attention; a year later, Vogue named her one of “the 5 Coolest Women in Lagos.” And in 2017 Sonariwo was the curator of Nigeria’s first pavilion at the 57th Venice Biennale, where she showed works by Peju Alatise, Victor Ehikhamenor and Qudus Onikeku. She was also a member of the jury for the Dak’Art Biennale in 2018 and was part of the L.A. Art Show last year.

The new Rele Gallery is small, located in a 700-square-foot former vitamin shop. But Sonariwo said she wanted it to feel casual and intimate.

“I didn’t want to be where I would have to put pressure on artists to create work,” she said. “I wanted people to come in and just take in the work and not feel intimidated.”

She brought three artists she discovered on her own — asking art teachers to recommend students, doing studio visits — having been moved by their various approaches and backgrounds.

“They were in different phases of their lives,” Sonariwo said. “These stories are not what the international audience is used to.”

Nneji, 28, said Sonariwo had not only raised her profile as an artist but also made her feel it was acceptable to create work that frankly addresses women’s health and reproductive organs. In her work “Portrait of the Listeners,” for example, two women flank a young girl — one in a vibrant print, the other in a dress denoting the Baptist Women’s Missionary Union of Nigeria.

“Coming from a society where women are seen as a commodity, she is trying her best to put female artists in the limelight,” Nneji said in a telephone interview, adding that her dealer tries to “make sure our voices are heard.”

Taking its name from the book and painting by the Nigerian artist Peju Alatise, “Orita Meta” — a Yoruba phrase loosely translated as “a junction where three roads meet” — the exhibition explores themes like inequality, purity and female empowerment.

All three artists had gone through Rele’s influential Young Contemporaries program, which provides training and mentorship and a group exhibition. “I realized that they needed an extra level of maturing,” Sonariwo said in explaining why she started the program in 2016, adding that the more than 40 artists who have participated have become their own support network, posting each other’s work on social media

Sonariwo, who plans to divide her time between Los Angeles and Lagos, said she looks forward to bringing more African artists to American audiences. “I really love their stories, their distinctive styles,” she said. “For me, it’s just an honor to be able to present their work.”