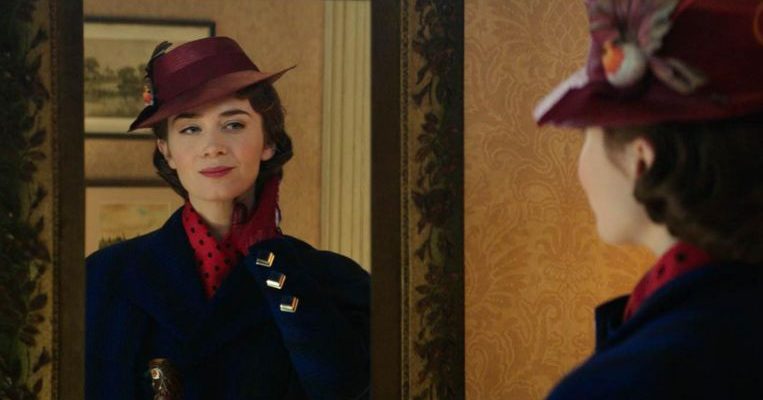 LOS ANGELES – Hollywood continues to crank out one remake after another pretty shamelessly. But it treads extra carefully when rebooting something as sacrosanct as Mary Poppins, the 1964 movie musical that became an instant classic.

The original – a children’s fantasy featuring Julie Andrews as a nanny with magical powers – is re-imagined in Mary Poppins Returns, which stars Emily Blunt and opened in Singapore cinemas this week (it opened on Dec 25).

Blunt, 35, knew something big was in the works when director Rob Marshall left her a cryptic message saying he wanted to discuss a role, but did not say what it was.

Speaking to The Straits Times and other media at a press day in Beverly Hills recently, the English actress recalls: “The voicemail had a charged energy to it, and when he called me, he said, ‘We’ve been digging through the Disney archives and this is by far their most prized possession.’

“And when he said ‘Mary Poppins’, the air changed in the room.”

But she and Marshall approached the project with mixed feelings because of how revered the original is. It won five Academy Awards, including Best Actress for Andrews, whose now legendary film career it launched.

Blunt is no stranger to success herself, including with the horror hit A Quiet Place earlier this year, the science-fiction blockbuster Edge of Tomorrow (2014) and crime drama Sicario (2015).

But the stakes felt different with this. When she was offered the role, she “was filled with an instantaneous ‘Yes!’, but also with some trepidation because (the character) is so iconic”, Blunt says.

“She had such a big imprint on my life and on everyone’s lives – people hold this character so close to their hearts,” says the star, who is married to A Quiet Place director John Krasinski, 39. They have two daughters aged four and two.

Knowing it would be impossible to fill Andrews’ shoes, she decided not to try.

“No one wants to see me do a sort of cheap impersonation of Julie Andrews because no one is Julie Andrews. She should be preserved and treasured in her own way for what she did.”

Instead, Blunt endeavoured to put her own stamp on the character who, in this film, once again swoops in to help the Banks family, this time in 1930s Depression-era London, some decades after the events of the first movie.

To put her own spin on it, the actress turned to the P.L. Travers book series the films are adapted from, which were published from 1934 to 1988.

“I found the books to be enormously helpful. She leapt off the page at me just in how complicated she is, how unknowable she is in this wonderful way – that duality of the character in that she is stern and incredibly rude and vain, and yet there is this humanity.

“And she has to have such a childlike wonder in her in order to want to infuse these children’s lives with it. There must be a generosity of spirit to want to fix and heal in the way that she does,” she says.

The actress also felt she was “in safe hands” with Marshall at the helm, even though he admits to some hesitation as well.

The 58-year-old film-maker – who directed Blunt in another song-filled fantasy, Into the Woods (2014), and won the 2002 Best Picture Oscar for the musical Chicago – felt compelled to take this on.

“I thought to myself: ‘If anybody is going to do it, I would like to do it because I really felt like I have that film – as many of us do – in (my) blood. And I wanted to be able to, in an odd way, protect the first film and treat this film with great care and love.”

But while preserving the spirit of the original, Marshall wanted to leave his mark on it too. The film thus features an original score and all new songs.

Lin-Manuel Miranda, 38 – the American actor, composer, lyricist and playwright known for creating the smash hit musical Hamilton – plays Poppins’ sidekick, Jack. He says: “There are a lot of highs on a movie like this and coming from the theatre where the only thing that changes in the performance is the audience to go ‘Okay Thursday we’ll be shutting down Buckingham Palace and riding with 500 bicyclists.’ And Friday you’ll be, you know, dancing with the penguins.”

It was an experience he deeply cherishes.

“I brought my son to (the) set every time we filmed a musical number and to watch his eyes (widen) like saucers while daddy danced with what seems like 500 dancers and bikers. I’ll never forget the look on his face as long as I live.”

Miranda and his wife have two sons, a four-year-old and another who was born early this year (2018).

“Musicals are very difficult to do,” Marshall says. “And an original musical, there are so many layers to it.”

“But the guiding message of this film – about finding light in the darkness – is what kept guiding me throughout the whole process.

“I feel people need this film now. That’s why we set our film in Depression-era in London, the time of the books. It was really so it could feel accessible and feel like it’s a story that needs to be told now.”