The fashion designer Tomo Koizumi hosted a casual — but still glamorous — affair at a small bar in the city’s hub for gay culture.

Even though I work in fashion, I’m not that interested in cool things, and I don’t have many friends in the industry — not even other designers. When I host a party, it’s usually a casual affair, not exactly Instagrammable. This was no exception.

We rented a place called Marohige, which is a small gay bar in the Shinjuku Ni-chome district, a hub for Tokyo’s gay subculture. Since they don’t serve much food, we had Uber deliver. The drinks were what we normally drink: shochu with jasmine tea, oolong tea and corn tea.

What made the evening special wasn’t only that we were having dinner at a favorite bar but that two of my guests — Keishan, a model, and Maxim, a drag queen from Paris — wore my clothes. When we went outside after dinner, people gathered around to admire their outfits. Some actually recognized the clothes as mine, which was nice.

The three drag queens who work at Marohige were also there that evening. One of them, who goes by the name Izumi Sexy, had performed at a K-pop party the night before, so there was a lot of talk about that. She did an impersonation of the K-pop star Nayeon from the girl group Twice. She’s a good dancer and is able to make the audience laugh.

The food and drinks may have been casual, but the drag queens made sure the place looked good. They spend a lot of time putting on their makeup and splendid costumes. It makes you feel glamorous. 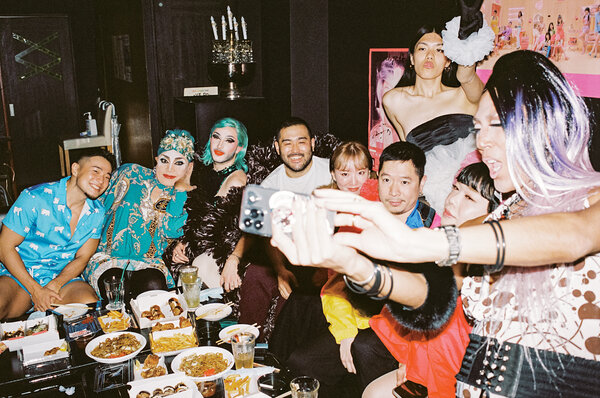 The attendees: Tomo Koizumi, 34, was joined by the publicist and consultant Ayako Maruyama, 38; the photographer Packychong Song, 36; the model Keishan, 25; and the drag queens Maxim, 31, Babie-No-Bitch, 47, Izumi Sexy, 39, and Takanenohana, 39.

The food: Koizumi mostly follows a gluten-free diet and usually bakes bread with rice flour when guests come over. Tonight, however, he ordered delivery. “It was all very simple,” he says. “Karaage [fried chicken], French fries and takoyaki,” which are round grilled cakes stuffed with octopus, often topped with scallions, bonito flakes and a special sauce.

The music: K-pop and J-pop. “I like Perfume, a Japanese group famous for their dancing; Blackpink; and Twice,” he says. “But my all-time favorite is Björk, who wore one of my dresses last year.”

The conversation: “We talked about how difficult and costly it is for young designers to put on a show in Paris,” says Koizumi. “I try to be optimistic: If the clothes are really attractive, then everything will be OK.”

Favorite party game: Yamanote, which is named after the main train loop in central Tokyo, involves saying the names of the stations on the line in order, so if one person says, “Shibuya,” the next person has to say, “Ebisu,” and so on. “If you make a mistake, you have to drink,” Koizumi says. “It’s fun to play when you’re drunk.”

This interview has been edited and condensed.