“Diversity means if you check the box, well, you did diversity,” she said in a recent telephone interview. “I’m always a little leery about how do you get diversity? It seems to me that it needs to be more than just checking the box.”

Known as a grandmother of the Indigenous theater movement in the United States and Canada, Ms. Miguel is among the 30 or so artists participating in this year’s First Nations Dialogues New York/Lenapehoking. (Lenapehoking is the homeland of the Lenape, the original inhabitants of the area encompassing New York City.) Taking place at multiple downtown theaters, the Dialogues bring together Indigenous performing artists from Australia, Canada and the United States for a week of performances, discussions and other gatherings, beginning Jan. 5.

After a low-profile first edition last year, the series is returning in an expanded, more public form. Coinciding with the annual conference of the Association of Performing Arts Professionals — which draws thousands of visitors from around the world — it is presented in partnership with 13 festivals and organizations, including American Realness, the Lenape Center, the American Indian Community House and Performance Space New York. Deliberately, it will be hard to miss.

“I hope that it’s immersive,” said Merindah Donnelly, an organizer of the series and the executive producer of BlakDance in Australia, speaking by Skype from Brisbane. “I hope that people can’t avoid having encounters with the First Nations Dialogues, though” — she added with a smile — “I’m not sure that we’re quite that big yet.”

In drawing attention to the breadth of contemporary Indigenous performance — with works spanning dance, theater, performance art and genres in between — the Dialogues are something rare for New York, if not unprecedented. Describing what to expect is not easy and not intended to be. In deciding what to program, the chief organizers — Ms. Donnelly, the choreographer Emily Johnson, and Vallejo Gantner, the former director of Performance Space — set out to challenge a notion they often come across, that Indigenous performance fits any single description.

A centerpiece of the week will be KIN, a subseries programmed by Ms. Johnson at Performance Space, in the East Village. The offerings here — many of which deal with themes of trauma, grief and healing — include Ms. Miguel’s Pulling Threads Fabric Workshop, in which storytelling and quilting serve as tools for mending old wounds; and SJ Norman’s “Cicatrix 1 (that which is taken/that which remains),” a meditation on the deaths of incarcerated First Nations people in Australia. 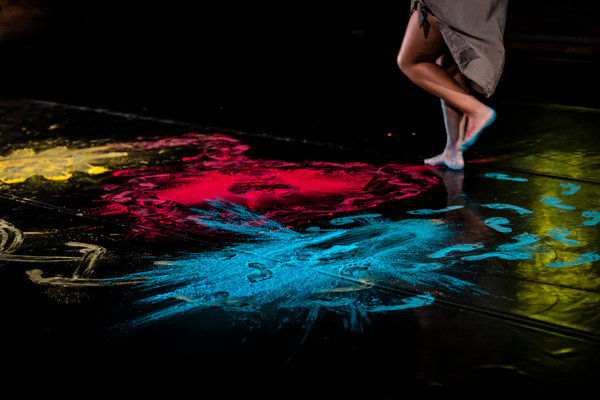 While the tone may be somber at times, there is also much to celebrate. SJ Norman, an Australian artist of Wiradjuri and Wonnaruah heritage, said in an email that the opportunity to gather in New York “feels like an honoring of the continued existence of our peoples in the big city, as well as the dynamism and globalism of our peoples, which is absolutely vast.”

Far from merely checking boxes, the Dialogues grew out of a wariness similar to Ms. Miguel’s about diversity, or a related hope: to build lasting institutional support for Indigenous performing arts worldwide. “This is about a deep cultural shift, deep cultural change,” Ms. Johnson said. “We are very adamant that this is not about just putting your name on something, not about doing the least amount of work.”

A Native Alaskan artist of Yupik ancestry, Ms. Johnson has been working tirelessly to counter what she calls “the perceived invisibility” of Indigenous performing artists, particularly in the United States. Funding for Indigenous performance is more robust in Australia and Canada, and said Ms. Johnson said that in her home country she has often found herself wondering: “Where are the Indigenous works? How do we bring this work forward?”

Mr. Gantner, who grew up in Melbourne, Australia, and lives in New York, has observed similar disparities. “Here it’s kind of stuck into a corner of folk or community practice, or traditional or ritualistic,” he said. “In Australia and elsewhere in the world, it’s not; it’s understood as a dynamic contemporary expression of a culture.”

One approach to bringing the United States up to speed is an ambitious pilot program, the Global First Nations Performance Network, which will be in development during this year’s Dialogues. (Planning sessions are closed to the public.) The envisioned network will include 15 institutions from Canada, Australia and the United States — with the potential to expand to other countries — all dedicated to commissioning and presenting works by Indigenous artists.

The network also requires, of each presenter, a commitment to undergoing what Mr. Gantner calls “a kind of decolonization process.” This could involve steps like hiring Indigenous board and staff members, building relationships with local Indigenous communities and implementing land acknowledgment, the practice of honoring the native inhabitants of a place.

Ms. Johnson sees this year’s Dialogues as a microcosm of what the network may eventually accomplish, including opening up international exchange. For the Australian choreographer Mariaa Randall, whose “Footwork/Technique,” part of KIN, explores the footwork of Aboriginal dances, a highlight of the Dialogues is the chance to simply talk and listen with peers from around the world.

“In our countries we can become kind of siloed,” she said. “I want to be able to sit with and see and hear from other First Nations females: what their struggles are, their achievements, and how they continue to keep their culture and their practice together, to keep moving forward, because sometimes it is really hard.”

Ms. Miguel, who founded Spiderwoman Theater with her sisters in 1976, noted that, historically, gatherings of Indigenous people have often been banned or met with state violence. “I think we’ve been separated for a very long time,” she said.

Ms. Johnson is the first to point out that while the First Nations Dialogues may be new, the work that she and her colleagues are doing is not. They see themselves as building upon a foundation laid by Ms. Miguel and her contemporaries over the course of many decades, right up to today. Ms. Johnson recalled a moment at last year’s Dialogues when the conversation turned from hypothesizing to taking action.

“Auntie Muriel was like, ‘I’ve been talking about this for 80 years. I want change!’ ” she said with an appreciative laugh. “So, we felt that push.”