On the season finale of “Bachelor in Paradise” Tuesday night, two women professed their love to each other and got engaged on a beach in Mexico — no bachelor needed.

“There was a lot of things that came between us, mostly myself and my own struggles,” Demi Burnett said to Kristian Haggerty, their blond hair blowing in the breeze. “I came here to find myself, but I found myself in you,” she continued before dropping to one knee and slipping a ring onto Haggerty’s finger.

On the televised after-show, Haggerty got on one knee in front of a live audience and gave Burnett a ring of her own. “The hate is drowned out by all the love,” Burnett later said.

For the last several weeks of the ABC reality dating show, a spinoff of “The Bachelor” that just wrapped up its sixth season, Burnett and Haggerty have turned one of the biggest, straightest reality TV juggernauts into a space where two women could actually fall in love.

For some, myself included, hate-watching the show — on which a rotating cast of singles from so-called Bachelor Nation pair up, break up, repeat, while rolling around in the sand and throwing back tequila shots — became simply watching.

Not just because Burnett and Haggerty are the first same-sex couple in the more than 40 seasons of the American franchise since “The Bachelor” debuted in 2002. (Two women paired off in the Vietnamese version of “The Bachelor” last year, causing a global stir online.) But also because their love story was handled with remarkable nuance and authenticity, two words that run counter to the show’s reputation. 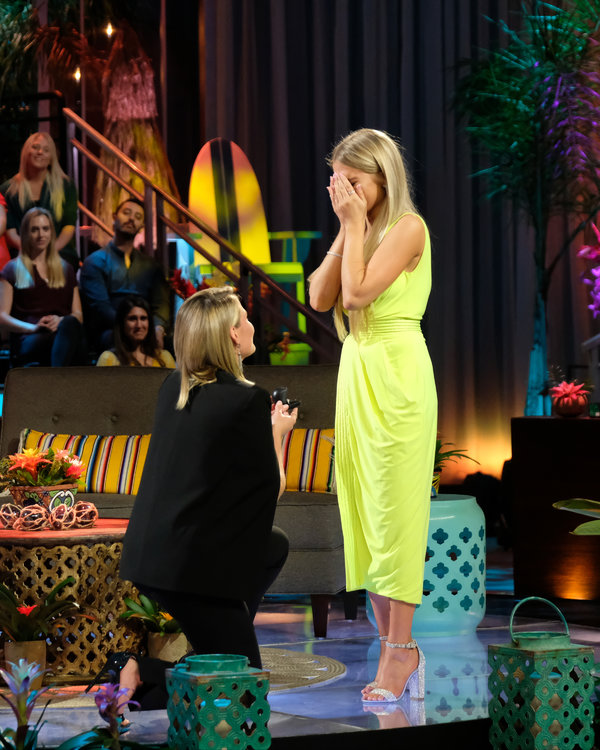 “The Bachelor,” the franchise’s flagship program, is a feminist nightmare in which a buffet of beautiful women, coifed and poured into shiny materials, are presented to one man, all of them desperate for his rose of approval. On “The Bachelorette,” the woman doles out roses to a gaggle of buff guys, but the regressive gender roles persist. Once the field is whittled, a marriage proposal is expected.

The franchise also has a problematic history with casting people of color. There have been no black bachelors and only one black bachelorette, Rachel Lindsay in 2017. (In recent years, more contestants of color have been cast.)

“Paradise” is different in some ways: Sequins are traded for string bikinis and tuxes for trunks, and as men and women are eliminated, they are replaced. But in the end, the goal is the same: that the last couples standing (there are usually a handful) decide whether to get engaged or not. On Tuesday, three couples put a ring on it.

As two slim, white, traditionally beautiful 20-something women, Burnett and Haggerty fit the show’s rigid beauty standards to a T. But from the beginning, they were clearly different from the usual “Paradise” contestants, beyond the obvious.

Haggerty, an ordained minister according to her Instagram page, joined the show midseason having never competed on “The Bachelor” or “The Bachelorette,” a rare occurrence. Burnett, who was on Season 6 from the start, had dated Haggerty in real life before filming. As the season progressed and Burnett got closer to another contestant, Derek Peth, she found couldn’t shake her feelings for Haggerty.

So the show brought on Haggerty, seemingly to give Burnett an opportunity to weigh out the relationships side-by-side. But surely the potential to gin up some classic “Paradise” drama was not lost on them.

Whatever the producers’ intentions, the result was that Burnett, an unfiltered, quick-witted and beloved contestant from Colton Underwood’s “Bachelor” season, came out as sexually fluid — not only to the world but also to her family, she said, bursting the bubble that separates reality TV from actual reality.

Viewers watched as she navigated the emotional whiplash that many L.G.B.T.Q. people have when coming out: the high of proclaiming your authentic identity, followed by the grind of living that truth day in, day out. As she fretted over the realities of life in a same-sex relationship — at one point, she wept as she envisioned the stares she and Haggerty would draw in public — the show let her speak for herself as she worked through her insecurities and internalized homophobia.

Further, the pair was not presented as some sort of sideshow to the straight couples. In fact, their story line quickly blended with the others, normalizing their relationship as much as a reality dating show could. (Neither Burnett nor Haggerty were available to comment on Tuesday ahead of the finale.)

As the episodes went on, another theme emerged: that this relationship was as respected as any has been on the show, not only by those behind the camera but also by the other contestants.

While viewers surely braced for the straight male gaze to descend upon the two women as they kissed and cuddled, that didn’t happen. For example, Blake Horstmann, a contestant who arrived at the beach as a playboy in a love quadrangle and left lovelorn and solo, said that he wished he could find the kind of love Burnett and Haggerty had. The women in the house rallied around the couple, serving as confidantes and champions.

And what about that famously gendered rose ceremony? Would the show milk the moment for a last hit of reality TV tension? In the end, the host, Chris Harrison, simply asked Burnett to give her rose to her chosen person. The week after, he asked Haggerty to do the same. And so on. Nonexistent crisis averted.

Any concerns that including a same-sex relationship would put off fans were put to rest as the show, which usually aired on Monday and Tuesday every week, continued to dominate its time slot, especially on Mondays, drawing about four million viewers an episode.

Yes, the modern world has been slow to crack through the program’s traditionalist shell, but even before this season, baby steps were made. In 2017, Jaimi King, an openly sexually fluid contestant, appeared on Nick Viall’s season of “The Bachelor,” but she didn’t last long. She said that year that the show had made her feel somewhat marginalized. She also had a stint on “Bachelor in Paradise.”

Harrison has long made a joke of declaring every season of every “Bachelor” show its “most dramatic ever.” And while this season of “Paradise” might qualify as that, too, it definitely takes the prize as the most progressive.