It was the pop-up of its day — though in influence it was more of a supernova than a pop.

“Sapphire Show: You’ve Come a Long Way, Baby” debuted at Gallery 32, a Los Angeles oasis for the work of African American artists. It opened on a holiday — July 4, 1970 — and closed five days later, the penultimate show at the experimental gallery near MacArthur Park. The gallery itself folded soon after.

“I remember the feeling,” said Senga Nengudi, one of the six featured artists, whose contribution included vinyl tubes filled with colored water. “It was exciting, fun and triumphant.” The show, named for the bossy character Sapphire Stevens of the radio and TV series “Amos ’n’ Andy,” also borrowed the famous Virginia Slims cigarette tagline for its sassy subtitle.

As likely the first show devoted to Black female artists in Los Angeles, and possibly in the United States, it shone briefly but brightly, and the energy it released can still be felt. 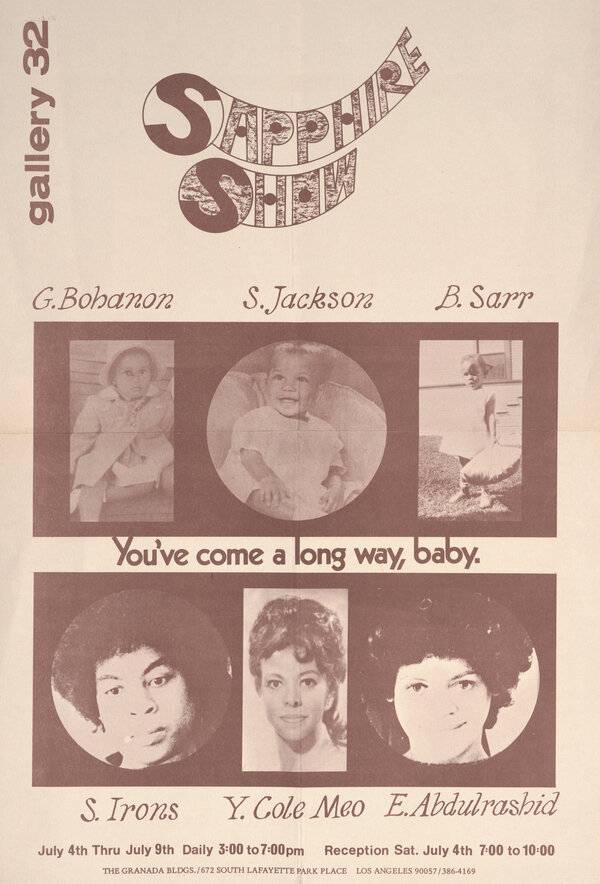 The artists featured included the founder of Gallery 32, Suzanne Jackson, who ran the art space from her loft in the Granada Buildings; Nengudi (who was Sue Irons then); Nengudi’s cousin, Eileen Abdulrashid (now Eileen Nelson); Betye Saar; Yvonne Cole Meo (1923-2016); and Gloria Bohanon (1939-2008).

Now, Ortuzar Projects, a TriBeCa gallery, has created a homage and an update: “You’ve Come a Long Way, Baby: The Sapphire Show,” on view through July 31 and featuring the same cast.

The 29 works on view include some of the artworks thought to be in the original show — Jackson’s records were lost, so the exact contents are hazy — as well as later works by all six women, to show how they developed over the decades.

Saar, now 94 and still based in Los Angeles, was older and by far the best-known of the group in 1970, and became famous for her appropriation of racist imagery, as in her politically explicit work “The Liberation of Aunt Jemima” (1972).

Her 1967 cosmological-themed print “Taurus” is the one work in the new “Sapphire” that organizers and scholars can definitively say was in the original exhibition.

Nengudi, 77, now living in Colorado Springs, has a solo show currently at the Philadelphia Museum of Art, “Senga Nengudi: Topologies,” featuring, among other works, pieces from her “R.S.V.P.” series: installations made of sand-filled pantyhose, initially inspired by her own pregnancy.

A precursor series, Nengudi’s “Water Compositions,” is represented at Ortuzar Projects — imagine a juicy, sensual version of Minimalism, with vinyl tubes full of brightly colored water. At least one of the works was in the original “Sapphire.”

The Savannah, Ga.-based Jackson, also 77, is a poet, dancer and set designer whose recent work has focused on painting. She has been featured in many shows, including “Soul of a Nation: Art in the Age of Black Power.” One of her large paintings in the current show, “Rag-to-Wobble” (2020), is amoeba-shaped, bulgy and thickly encausted, incorporating vintage dress hangers.

The original “Sapphire” was a Salon des Refusés: It was a reaction by the women to being shut out of a 1970 exhibition of Black artists sponsored by the Carnation evaporated milk company at its Los Angeles headquarters, which had invited only one female artist, to participate.

“All the men were included,” Jackson said. “We were so annoyed that we had been ignored.” Instead, they staged their own show. Its pioneering existence seems particularly resonant now.

“It opened a door,” said Carolyn Peter, a curatorial assistant at the J. Paul Getty Museum who, in a previous job, co-organized the 2009 exhibition “Gallery 32 & Its Circle” at Loyola Marymount University, which examined the impact of the far-sighted gallery (where David Hammons, Timothy Washington and Emory Douglas also showed) on the Los Angeles art world. “Black women had a double challenge — their color and their gender — and these women took a stand through their art,” Peter said.

Kellie Jones, a Columbia art history professor who has studied the era, noted that the original exhibition “still needs its 15 minutes of fame. People are just now talking about it. It was such an impressive show.”

The 1970 “Sapphire” was thrown together quickly — the poster, designed by Nelson, misspelled Saar’s name, and incorporated childhood photos of some of the artists.

“We just happened to be there in a room all at the same time and decided to do this very quickly,” Jackson said of its genesis. She founded Gallery 32 in 1969 at age 25, and it lasted less than two years. “I ran out of money,” she said. There was only one show after “Sapphire,” of Meo’s work, and her penchant for combining collage and painting can be seen in “Forbidden Fruit in Garden of Eden” (1965) at Ortuzar Projects.

In addition to Gallery 32, Los Angeles in 1970 had several venues championing artists of color, including the Brockman Gallery and the nonprofit Watts Tower Arts Center, but they weren’t focused on women. In 1973, Saar organized “Black Mirror,” a successor show devoted to Black women using the same Virginia Slims subtitle as “Sapphire,” at Womanspace.

Invoking the Sapphire character in the original show’s title was a deliberate and bold choice. Saar, who was part of a group effort to curate the show, wrote in a recent email that she saw Sapphire as “a tough woman, a busybody and know-it-all.”

She added, “If you were a woman in the art world at that time, you had to be bossy, and also creative.”

Jane Rhodes, a professor of Black studies at the University of Illinois at Chicago and the author of “Framing the Black Panthers: The Spectacular Rise of a Black Power Icon,” said that Sapphire was “more than assertive, she was a shrewlike, browbeating, harassing matriarch — every negative depiction of a Black female subject.”

Hence the boldness of the repurposing by the Gallery 32 artists. “It showed a playfulness but also a radical determinism,” Rhodes said. “We get to name ourselves.”

Rather than a critique of the character, Jackson said the group “used it as an upfront way of saying we’re really strong women.”

“I was a young whippersnapper, and I was very adamant about my career,” Nengudi said. She added, in admiration of Jackson, “You can’t even imagine how difficult it was to get a gallery going in Los Angeles at that time.”

Saar recalled a telling detail of how Jackson got around town as a nascent gallerist and artist: “She drove an ambulance for her car.”

Nelson, now 82 and living in Novato, Calif., had been crashing with her cousin Nengudi in that period.

“I was struggling to share my art with folks,” Nelson said, adding that the five-day run did pay off for her. “Someone did buy a painting,” she said, one depicting “a beautiful, strong, dynamic lady.”

Some of the older works in the current exhibition have an earthy, bohemian air, reflecting a long-ago California era. (About two-thirds of the show is for sale.)

In Jackson’s canvas “The American Sampler” (1972), a face seems to emerge from a tree stump. Bohanon, who was known for abstract work, has eight works in the show, including two tondos depicting outreaching hands.

Saar is represented by “Rainbow Mojo” (1972), a painting on leather depicting colorful natural forms: a moon, stars and a bursting rainbow.

Saar’s “Auntie & Watermelon” (1973), a sculpture with a Black female figure and collaged Aunt Jemima images that was done one year later, indicates the direction her practice was increasingly taking post-“Sapphire.”

“She’s the theorist of taking caricature and stripping it of punch, reusing it to her own ends,” said Thomas Lax, a curator of media and performance art at the Museum of Modern Art.

Lax is organizing a forthcoming show at MoMA, “Just Above Midtown: 1974 to the Present,” about the New York art gallery founded by Linda Goode Bryant that focused on Black artists, Nengudi among them.

“They continue to have a freshness of spirit in how they make things,” Lax said of the way the artists in “Sapphire” have developed. “There’s a continued commitment to reinventing their own forms.”

For her part, Jackson said that for the four artists who are still alive, their bond endures. “We’re still a kind of family,” she said. “The ‘Sapphire Show’ was our beginning and our impetus.”

Nengudi said the “camaraderie and support system” has stayed with her.

“Even though the show didn’t last that long, the important thing is that it happened,” she said. “It’s a part of history.”