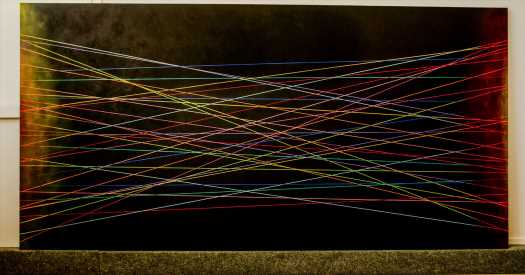 HAMPTON BAYS, N.Y. — The abstract painter Virginia Jaramillo has gotten very good at lines — physically, drawing them to great effect, but also metaphorically crossing them, as a woman of Mexican heritage in the art world.

At age 81, she has spent the last 60 years or so thinking about “how important one line can be,” she told me when I arrived at her Long Island studio on a Saturday morning in August.

She was eager to discuss her paintings and her career, especially her exhibition at the Menil Collection in Houston, “Virginia Jaramillo: The Curvilinear Paintings, 1969—1974,” on view from Sept. 26 to July 3.

In the roomy studio, attached to her split-level house, were some of her lines in action. She had been working on a large, rectangular painting, “Quantum Entanglement,” in which thin, wavy marks in bright colors reach out from a hazy area on each side of a black background and then jumble together in the middle. 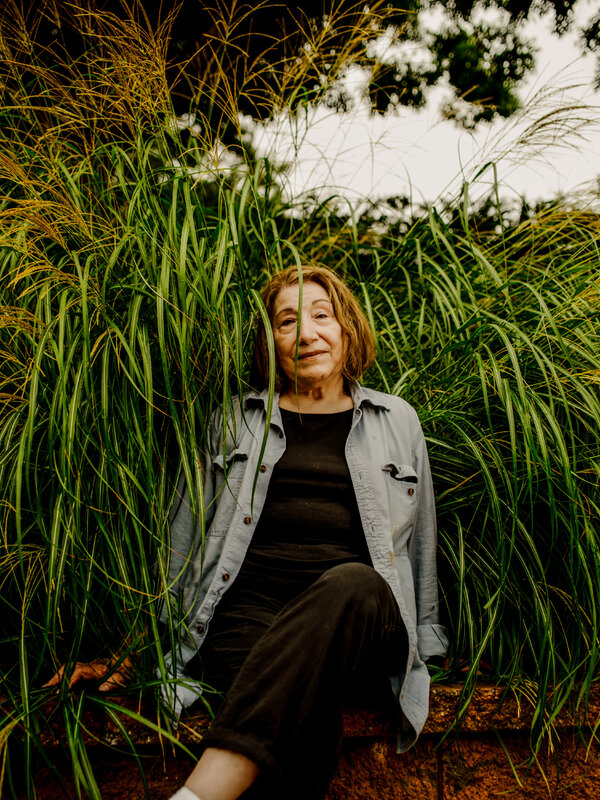 “It’s a scientific theory about two particles in space that interact,” she said, explaining the title. “No matter how far away they are in a galaxy, they can still relate to one another. It could be one one-hundredth of a second, but there’s still a vibrancy.”

Ms. Jaramillo (pronounced hara-ME-oh) has vibrancy to spare. She laughs and swears easily, and she had put out some nuts and some chocolate doughnuts for me. We had our masks on, but she didn’t seem overly concerned about an in-person interview during a pandemic.

The Menil exhibition has just eight paintings but it demonstrates her ability to squeeze impact out of a deceptively simple composition. “Green Dawn” (1970), for instance, is a verdant rectangle with just one thin, wavy yellow line that seems to be wandering away from the upper right corner.

“That little line is off on a journey — but it changes its mind, it’s a flirt,” said Kellie Jones, a professor of art history and archaeology at Columbia University who helped give Ms. Jaramillo a career boost in 2011. Ms. Jones included Ms. Jaramillo in the show “Now Dig This!: Art and Black Los Angeles, 1960—1980,” at the Hammer Museum in Los Angeles.

Within abstraction, Ms. Jaramillo has experimented and evolved, spending more than a decade making works on paper and then coming back around to painting. Her adroitness with her materials was, and remains, keen; a reviewer wrote in The New York Times in 1984 that she was able to use “paper’s natural absorbency to develop subtle forms that the eye just barely grasps.” Over the years, she has moved toward using brighter, more varied colors that offer multiple entry points for viewers.

Her art began as an experiment in color blocking, the pairing of contrasting tones, and it got even leaner as she went along. “I just kept simplifying, simplifying,” she said. “I dropped the form and kept the line.”

The curvilinear works in the Menil show are a hinge point of sorts. “They represent a breakthrough for her, and set the stage for her works to come,” said Michelle White, the museum’s curator, who organized the show. The paintings start to emphasize negative space, fueled by Ms. Jaramillo’s growing interest in Japanese art.

To question why has it taken so long for Ms. Jaramillo to get this level of attention is to wonder whether she has faced discrimination as a Latina artist.

“A lot of people my age would have thrown in the sponge by now!” she added, laughing so heartily that she lurched forward. “It’s very serious, so all you can do is laugh.”

Ms. Jaramillo was born in El Paso, Texas, but her parents moved to Los Angeles when she was 2. When she was 11, her father, a truck driver, gave her a drawing how-to book. He wanted to encourage her talent and he also gave her a piece of advice: “Never be ashamed of your heritage.”

Ms. Jaramillo said that growing up in a multicultural part of East Los Angeles — where white, Latino and Japanese residents mixed — gave her the confidence to pull from any art tradition she liked. Her biggest early influences were the Abstract Expressionists Clyfford Still and Barnett Newman, and the designer Charles Eames; later, in the 1970s, she was wowed by Mexican muralists, especially David Alfaro Siqueiros.

She attended Otis Art Institute (now the Otis College of Art and Design) with a student whom she had met in a high school art class, Daniel LaRue Johnson; they married in 1960. Mr. Johnson, who was also an accomplished abstract artist, died in 2017.

In her 20s, Ms. Jaramillo was the early success story of her circle.

“In our age group, she was the first one to make significant public progress,” said the sculptor Melvin Edwards, a longtime friend, referring to a Ford Foundation purchase grant she got in 1962.

A 1965 trip to Paris was formative for Ms. Jaramillo and Mr. Johnson.

“That was the opening of my consciousness, aesthetically,” Ms. Jaramillo said. They decided to move to New York, where they lived for 45 years, mostly in SoHo.

In 1971, she was part of a landmark exhibition, “The DeLuxe Show,” initiated and funded by the Menil Collection’s founders, John and Dominique de Menil. (The museum’s current show of Ms. Jaramillo’s work is meant to commemorate the approaching 50th anniversary of the “DeLuxe Show.”)

Curated by the artist Peter Bradley, the original exhibition was held in the derelict DeLuxe Theater in Houston’s Fifth Ward, a poor and largely Black neighborhood — at the time, a daring and unusual venue for abstract art.

It was the rare integrated show at the time, with both Black and white artists including Sam Gilliam, Al Loving, Kenneth Noland and Larry Poons — and Ms. Jaramillo, who was the only woman and the only Latino artist. She was represented by two works, one of which was “Green Dawn.”

It was a promising early success for a painter, and in 1972, Ms. Jaramillo was featured in the Whitney Museum of American Art’s annual show, the precursor to the Biennial.

But Ms. Jaramillo and Mr. Johnson, who was Black, noticed something.

“We were invited to the openings, but not to the after-parties,” she said of her art world interactions. “That’s where the real business was being done.”

She added that for artists of color, the system was “geared to make you fail.” As for today’s ongoing racial reckoning, Ms. Jaramillo said she recognized the importance of movements like Black Lives Matter, and that she sees it as part of a long struggle. “I was married to a Black man during the civil rights movement,” she said. “I lived it.”

When a longtime dealer of hers, Douglas Drake, moved away from New York, he set up a meeting for her with the well-known gallerist Mary Boone.

Ms. Boone — who pleaded guilty to tax fraud in 2018 and went to prison for 13 months — sat down with the artist in the 1990s, still at the height of her power as a dealer, and reviewed her portfolio.

She seemed underwhelmed, Ms. Jaramillo recalled. “I said, ‘Well, is there a gallery that you think I might fit into or you could recommend for me?’ She said, ‘Well, if I said that you were such a great artist, they’d wonder why I didn’t take you.’ ”

During our conversation, Ms. Jaramillo thought about this for a second. “Can you believe that?” she said. “I guess I was dealing with Mission: Impossible.”

As a couple, Mr. Johnson and Ms. Jaramillo faced “very hard times” for much of their adult life, she said, relying on the barter system to pay bills, and selling art any way they could.

She recalled, “Danny would load up the car like twice a week or so with little pieces that we had made, and he’d say, ‘Well, I’m going to bring back some money for groceries.’ ”

Did she ever think of quitting? “Never, not once,” she said, and the same went for Mr. Johnson. “We had decided early on we weren’t going to work for anyone. It was a mutual partnership.”

Something of that perseverance and economy made it into Ms. Jaramillo’s art.

“They are disciplined,” Ms. Jones said of Ms. Jaramillo’s abstractions. “All of those paintings from the ’60s and ’70s show someone who is after very specific effects.”

Science and science fiction, which grabbed her attention when she was a little girl, still keep her interest today.

“I’m working on five pieces now which are going to deal with brain waves, and using colors to show calmness, excitement and other activity, but in an abstract way,” she said. “When I hear some kind of scientific theory, I visualize it.”

The victory lap of sorts offered by the Menil show certainly helps her momentum, which has been steady despite a lot of obstacles.

“I just keep working,” Ms. Jaramillo said. “It would’ve been nice if this moment had come earlier, but, hey, it came.”