More than 600 miles of subway tracks carve through the streets of New York City, but the 7 train, which runs along Queens’s bustling Roosevelt Avenue, glides above perhaps the most ethnically diverse urban area in the world.

“Queens is so endlessly fascinating because it’s really the heart and soul of the city’s ever-changing diversity,” said Dan Barry, a reporter who was born in Jackson Heights. “Dozens of languages being spoken — you know, every time I talk to a demographer the number goes up; it’s 160 languages spoken, 180 languages spoken.”

But by the end of March, this area had also become “the epicenter of the epicenter,” where thousands fell sick within weeks, signaling the apparent threat the coronavirus posed to the United States. 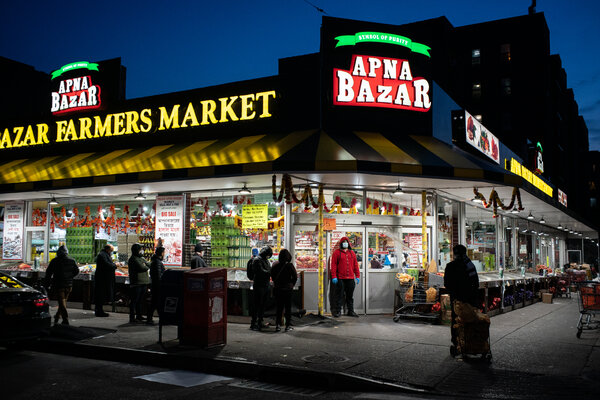 In late April, Mr. Barry and the Metro desk’s immigration reporter, Annie Correal, teamed up with the Times photojournalist Todd Heisler to build a narrative project that would capture what it was like in Queens during those grueling and terrifying days last spring.

Their report was published on Thursday, and appears in newspapers on Sunday as a special print section designed by the art director Wayne Kamidoi.

“It was always meant to be a sort of signature, sweeping, cinematic look at Queens during the worst weeks of the pandemic,” said Kirsten Danis, Metro’s investigations editor. “We wanted to go back and explore: What was that like for the people living through it?”

Some parts of the narrative were clear from the start. One day in March, when 13 Covid-19 patients died at Elmhurst Hospital, would help frame the story. Mr. Barry called that day “a seminal moment not only in New York City but for the country.”

But the biggest challenge for the team of reporters, who spent months speaking to local residents, was finding the right people to follow.

“We wanted to make certain that the reader wouldn’t just read about one death after the next,” Ms. Correal said. “We wanted it to be representative of reality, which is that many, many people did survive.”

In early May, Ms. Correal began tracing the virus’s havoc in reverse by reaching out to local organizing groups, such as New Immigrant Community Empowerment and Make the Road New York. As she heard about the L.G.B.T.Q. community in Jackson Heights — a tight-knit group that had withstood waves of gentrification — it became clear that queer people had been hit particularly hard by the virus. Their stories would have to be told.

When the team members combed through the borough to speak with local residents, they found they needed extra reporting help.

“Given that more than 50 percent of the population in some of these ZIP codes is Hispanic, it was really critical that we had Spanish speakers,” Ms. Correal said.

Alongside Ms. Correal and Mr. Heisler, who are both Spanish speakers, Jo Corona, a freelance reporter, was out every day chasing down leads.

“She literally would talk to people on their stoop, who were sitting outside getting a moment of fresh air,” Ms. Correal added. (Their reporting would later be translated into Spanish.)

Mr. Barry and Ms. Correal each took on three profiles, building sprawling timelines to weave each person’s experience into one cohesive story. They spent months interviewing relatives in the sweltering summer heat, wearing protective equipment as they cautiously entered homes alongside Mr. Heisler to take in the small details of each place.

But as certain days became their own chapters of the story, Mr. Heisler faced a different challenge.

“Writers have the ability to travel throughout time; photographers do not,” he said. “You have to go back and figure out: What can I photograph in the present that still resonates in somebody’s life? What’s still there? Who remains?”

Through tearful conversations with surviving family members — and glimpses at photographs and urns — the reporters got an intimate look at how the virus affected thousands of people.

Capturing these people’s stories with careful attention to detail, the team hoped, would allow readers to understand the pandemic on a personal level.

“We hope that you can feel the building of foreboding, you can feel an affinity or an attraction to the characters we’re presenting,” Mr. Barry said. “So whatever happens to those characters, you feel it in your bones.”