In “One Good Meal,” we ask cooking-inclined creative people to share the story behind a favorite dish they actually make and eat at home on a regular basis — and not just when they’re trying to impress.

The guitarist and men’s wear designer Freddie Cowan wasn’t exactly expelled at age 15 from his prep school in the English Midlands, but he wasn’t exactly welcome to stay either. “I was obsessed with playing music and drinking and just doing everything but studying,” says Cowan, guitarist for rock quintet The Vaccines and founder of minimalist men’s wear brand Basic Rights. “So they kind of asked me to leave. Which I was very happy about, because I wanted to leave anyway.”

Before he left, he befriended a classmate whose family lived in Bangkok. “We went to Thailand and it was wild,” Cowan says. “The first thing we did, we got there and I had a haircut and got a pedicure, which was really weird, and then got a fake driving license.” Along the way, Cowan ate a “very, very common, very, very simple Thai street food — and I just fell in love with it.” At the time, he simply called this dish “the chicken,” but he eventually came to know it by its Thai name, pad kra pao, a sweet-and-spicy mix of minced poultry and chopped chiles that he’d devour twice a day with teenage gusto. 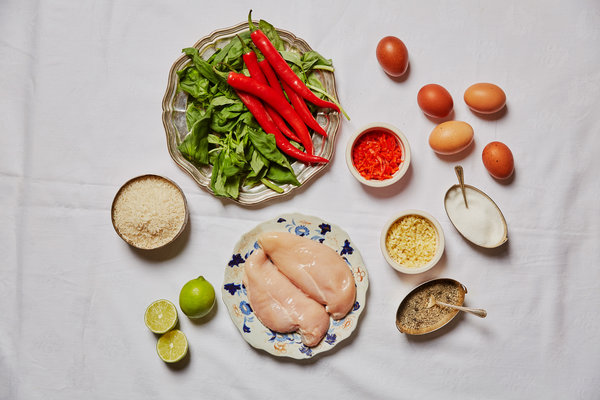 Time went by and Cowan grew up, sobered up, formed his band in 2009 and founded his clothing line in 2016. The Vaccines (who launch a 12-city tour of Britain this week) became one of the last meaningful rock bands of their generation, an unapologetically traditionalist noise machine anchored by Cowan’s frenetic electric guitar. And the team at Basic Rights (which has just finished designing this year’s spring collection) became purveyors of perfect made-in-Thailand tees and high-waisted trousers. Previous seasons have been inspired by Jimi Hendrix’s time in Morocco and Iggy Pop’s exodus to Berlin. This season uses soft-collared shirts and pinkish pants to conjure up cosmopolitan, 1970s-era Rio de Janeiro.

Given Cowan’s fascination with the bohemian life — when he’s not traveling, he lives in a country estate outside Birmingham, England — perhaps it’s no surprise that he kept returning to Thailand and eating pad kra pao. Late last year, after he turned 30, he finally got ahold of the recipe from a chef at the Atrium hotel in Bangkok and learned to make it himself. “The flavors are very young and very spiky,” he says, “but it’s very nourishing.”

3 tablespoons neutral oil (such as canola)

1. Heat oil in a frying pan. Add garlic and chiles.

2. After garlic begins to brown, add chicken. Stir-fry for 2 to 3 minutes.

3. Add all other ingredients except basil. Stir-fry for about 8 minutes, crumbling the chicken with a wooden spoon and stirring often.

4. Remove chicken from pan onto a bed of steamed rice. Top with basil and a fried egg, and serve with Prik Nam Pla sauce on the side.