When the artist Kameelah Janan Rasheed was commissioned to conceive of a project honoring Brooklyn abolitionists, she wanted to turn the idea of a monument on its head. She proposed to reinvent the design of the anticipated Willoughby Square Park in Downtown Brooklyn with pavement engravings and bronze placards, which would offer questions and prompts to highlight the borough’s antislavery movement and its legacy.

But the preservationists and activists who, for 20 years, have pushed the city to honor Brooklyn’s abolitionist roots were displeased with Ms. Rasheed’s designs, complaining they were too abstract at a time when women and people of color are fighting to see themselves figuratively represented in New York’s monuments. 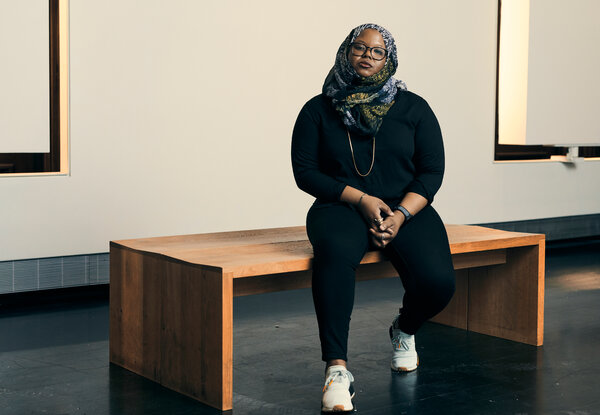 “We are not going to settle for plaques and engravings, which people will walk right past,” said Shawné Lee, whose family helped ignite the neighborhood’s preservation efforts. “I want to see historical figures represented, because these days we need to see people who look like us in the city’s monuments.”

Since at least 2019, Ms. Lee and other activists have proposed a monument including Black women like the educator and abolitionist Sarah J. Garnet and the investigative journalist Ida B. Wells. Ms. Lee is an owner of 227 Duffield Street in Downtown Brooklyn, a house adjacent to the park that historians now believe was part of the Underground Railroad. It is currently under review for landmark status after it was threatened by eminent domain to make room for the 1.15-acre park, whose completion is estimated in 2022. The city’s most recent plans expect that the building will be preserved.

The confrontation played out last week during a meeting of the Public Design Commission, which reviews permanent monuments and works of art on city property. After listening to public comment, the commissioners voted unanimously to table Ms. Rasheed’s proposal, a $689,000 dollar project steered by the Department of Cultural Affairs and the city’s Economic Development Corporation.

“We are not going to give approval until this process has moved further along,” said the commissioner Signe Nielsen at the meeting, adding that a later review would allow “greater opportunity for the artist to hear some of the voices that perhaps have not been heard.”

The meeting was a turbulent introduction for Ms. Rasheed into the city’s public art process, which has become increasingly contentious under Mayor Bill de Blasio, who has commissioned nearly a dozen new monuments in the last two years through a program called She Built NYC.

Critics have accused Mr. de Blasio of rushing to build monuments and speeding up the public review process as a way to affix his legacy on the city’s landscape. In 2019, the cultural affairs commissioner, Tom Finkelpearl, resigned from his post in the aftermath of another difficult artist selection process to replace a controversial statue in Central Park.

But the city argues that it has followed the law for the public review of the monument at Willoughby Square Park. “Starting with a community presentation in August 2019, the artist selection process has been a rigorous and thoughtful engagement with the legacy of the slavery abolition movement of Brooklyn,” said Ryan Max, a spokesman for the Department of Cultural Affairs. “The selection of Kameelah Janan Rasheed marks the start, not the end, of involving the local community in a real, meaningful process.”

Nevertheless, some city residents worry that the Willoughby Square Park commission lacks public accountability. Although the artist was selected nearly a year ago, Ms. Rasheed was not publicly announced as the competition’s winner until this month. (The city said that Covid-19 played a role in delaying its work on the project.)

“Having multiple pathways for engagement is the most important thing to focus on here,” she said at the design meeting. “This is just one project in a larger ecosystem of projects, which are trying to address questions around abolition.”

According to public art experts, roadblocks within the Public Design Commission will yield another delay for the neighborhood’s $15 million park, a project that began under Mayor Michael R. Bloomberg nearly 17 years ago as part of a larger $100 million plan to redevelop Downtown Brooklyn.

Preventing the destruction of 227 Duffield Street, which was home to the abolitionists Harriet and Thomas Truesdell in the mid-1800s, has energized community advocates who have promoted the neighborhood’s role as a stop in the Underground Railroad. Recent efforts have included renaming Duffield Street as Abolitionist Place and installing a plaque to Ida B. Wells, who lived in the area and, in the 1890s, documented lynching in the South. The local community board has even renamed the park, but the city has not yet recognized it: Abolitionist Place Park.

“Whatever we build in Downtown Brooklyn should rival the Statue of Liberty,” said Raul Rothblatt, who has fought to preserve the area’s history for nearly 20 years.

He added: “But instead, the city is planning to build a dog park above where tunnels once connected abolitionist homes.”