LEIPZIG, Germany — Last spring, the German newspaper Die Zeit received a surprising piece of reader mail, from Neo Rauch, one of the country’s best-known artists. It wasn’t a letter, but a photograph of a large painting he had produced in response to a recent article.

The article, by the art historian Wolfgang Ullrich, argued that Mr. Rauch was contributing to a rightward tilt in the country’s art scene, and pointed to public statements Mr. Rauch had made criticizing political correctness and railing against activists’ “Talibanization” of daily life.

These positions are also reflected in his art, Mr. Ullrich wrote, adding that the surreal worlds the artist creates are refuges from “a contemporary society he hates” and from an art world that is increasingly fascinated with social justice, postmodernism and postcolonialism.

Mr. Rauch’s painting in response showed a man whom many presumed to be Mr. Ullrich defecating into a chamber pot and painting with excrement. The figure he paints has its arm outstretched in an apparent Hitler salute, and the painting is called, “Der Anbräuner,” a term once used to designate a person who maliciously accuses someone of being a Nazi.

When Die Zeit published the photo, its crudeness set off both a media furor and a debate about Mr. Rauch’s political beliefs — a discussion that has now resurfaced with the opening of an exhibition of new work by Mr. Rauch at Eigen + Art, the Leipzig gallery that represents him, and the publication last month of a book by Mr. Ullrich about the dispute. 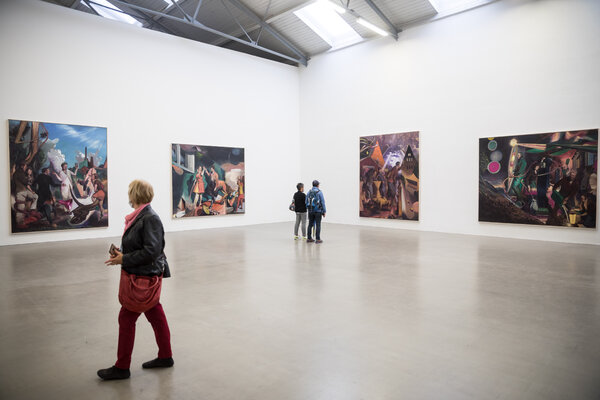 The exhibition, which runs through Dec. 12, is the highest-profile display since the incident of works by Mr. Rauch, 60, an artist known internationally for paintings that blend elements of Pop Art, surrealism and social realism. (A widely anticipated exhibition of his early work was scheduled for this summer at Leipzig’s Museum of Fine Arts, but Mr. Rauch called it off in spring, saying that his works would be overwhelmed in the museum’s busy galleries.)

The new show consists of 16 paintings, largely in keeping with the style of previous work by Mr. Rauch, who in 2007 became the first living German artist to receive a solo show in the Metropolitan Museum in New York and is one of the most expensive living German artists at auction. Many of the paintings feature dreamlike groupings of figures in garish colors, assembled into horrific or comic scenes — a woman caressing a monstrous lizard, a man holding an unconscious mermaid — against an industrial backdrop reminiscent of the area of northeastern Germany around Leipzig.

In an interview in his studio in a former cotton mill, Mr. Rauch, took two shots of vodka and said he had little interest in discussing the offending article.

“It is so absurd,” he said, explaining that he sees himself as “the last exponent of the social center,” not a right-wing figure. He said that he had been angered by Mr. Ullrich’s attempt to politicize his art, which he insisted was personal and unconcerned with everyday realities.

In other interviews, however, Mr. Rauch has spoken more openly about politics. In 2018, he told journalists from the newspaper Handelsblatt that political correctness was restricting free speech and that it reminded him of the authoritarian system in the former East Germany, where he grew up.

Mr. Rauch reiterated in person that he believed “cancel culture, and the phenomena that come with it, should concern us all” and that he was perturbed by the way people were pigeonholed as right-wing if they disagreed. “There is a polarization taking place,” he said.

He emphasized that his views were rooted in his experiences in East Germany, a one-party state with an omnipresent domestic spying apparatus. “You will not get put in the gulag” for dissent in today’s Germany, he said, but added, “I am once again encountering this stilted way of talking, like walking around on tip toes.”

Born in Leipzig, Mr. Rauch was raised by his grandparents after his parents were killed in a train accident when he was a few weeks old. After completing mandatory military service, he attended Leipzig’s Academy of Fine Arts, where he studied under Arno Rink, an influential East German painter.

After the fall of the Berlin Wall, he had his first solo show at Eigen + Art, in 1993. His international breakthrough came in 1995, when the gallerist Judy Lybke exhibited one of his works at the Armory Art Fair in New York. The fair favored video art and photography at the time, and Mr. Rauch’s work stood out as one of few examples of figurative painting.

Eventually, a buzzy new term, “The New Leipzig School,” was coined to describe a broad range of artists from the city, including Mr. Rauch, attracting the attention of curators and collectors. Two years after the artist’s show at the Met, Brad Pitt purchased one of his paintings for 1 million Swiss francs, about $970,000 at the time.

In a telephone interview, Mr. Lybke said that Mr. Rauch was responsible for the resurgent popularity of painting in the early 2000s and argued that he “opened the door for many artists of his generation.” He lauded the artist’s paintings for their timeless quality and compared them to the movie “Tenet” because of the way they depict “the past, the present and the future simultaneously.”

But Mr. Ullrich argued that the insular and anachronistic nature of Mr. Rauch’s work also makes it politically fraught. His paintings imagine “an alternative world,” the art historian wrote in Die Zeit, in which the artist’s “unfulfilled longing” for a different kind of society is satisfied.

Other critics have reacted skeptically to Mr. Ullrich’s arguments. Rose-Maria Gropp, an editor at the Frankfurter Allgemeine Zeitung newspaper who has followed Mr. Rauch’s career closely, said it was “problematic” for a critic to “equate an artist’s work with the things he has said in public.” This can lead to unjustified interpretations, she said, in which ideas are projected onto an art work rather than discovered within.

Mr. Rauch reacted so strongly, she added, because he is “sensitive to criticism.”

Mr. Ullrich, whose book about the dispute is called “Becoming a Boogeyman,” said the painting that Mr. Rauch artist produced in response to his article represented “the first prominent example of a new right-wing form of art,” because it turned a left-wing critic into a repellent figure.

He also pointed out that a few weeks after Die Zeit published Mr. Rauch’s response, the painting was sold at a charity event for 750,000 euros, about $880,000, to Christoph Gröner, a conservative real-estate developer, whom Mr. Ullrich called a “Trump-like” figure.

Mr. Gönner has recently said he plans to start a new foundation to take on “untruths” about subjects like carbon emissions and immigration. Through a spokeswoman, he said that he “categorically rejects” claims that the purchase was a political statement, and that it was instead to benefit charity.

Mr. Rauch said he had sold the painting, which was auctioned at a gala for a children’s hospice, because he wanted some good to come out of the dispute. He also said the episode had been a learning experience for him, and pointed to a sign that he had since affixed to his studio door: “Never answer a critic.”

Nevertheless, he said that his personal preoccupations do sometimes surface in his paintings in ways that he does not fully realize until they are finished. One recurring motif of his new exhibition, for instance, are spinning tops, which he said represented a desire to find “balance” in his political positions.

In one of the show’s largest and most striking paintings, “Die Wurzel,” or “The Root,” two acrobats balance on one of the oversized toys while in the foreground a demonic-looking man with a tail holds up a bullhorn, as if speaking at a rally or protest. Mr. Rauch said he had realized that the figure at the front represented “the kind of irritating person we increasingly encounter in the media, who hopelessly see themselves as being on the correct side of the political trench.”

“The man with the megaphone,” he said, “is not my friend.”