STOCKHOLM — Olle Liljefors stood in a makeshift D.J. booth on Friday evening, spinning tracks by the Swedish musician Avicii, who died suddenly in April. It was not yet 8 p.m., but the cavernous venue was already at capacity, and Liljefors looked slightly nervous.

Stepping away from the decks, he swapped his black leather motorcycle jacket for white robes and a gold-color stole. Then, with minutes until Mass began, the Lutheran pastor mixed one last song and bopped his head in time to the electronic beats that filled the grand dome of the Hedvig Eleonora Church, a striking ocher octagon in Stockholm wedged between chic restaurants and a busy shopping street. 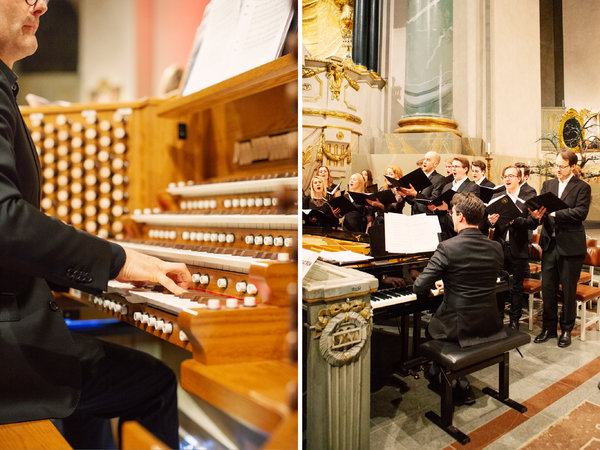 The service that followed was intended in part as a memorial to Avicii, whose real name was Tim Bergling, who died in Muscat, Oman, in an apparent suicide. But by replacing the normal hymns with Avicii’s music, the religious ceremony was also part of a continuing effort by Liljefors and other clergy to draw younger members to the dwindling ranks of the Lutheran Church of Sweden.

Photographs of the musician, who grew up in Stockholm in the parish that the Hedvig Eleonora Church serves, were on the altar. Bergling’s father gave a short speech that brought many in the pews to tears. Liljefors delivered the sermon, which drew on lyrics from Avicii’s songs. “When we sit at home ‘waiting for love,’ or when we are happy and want to dance, or when we feel lost, like ‘wake me up when it’s all over,’ music can bring love, hope, comfort and joy,” he said.

Rehearsing Avicii’s “Without You”

The music, though, was the main attraction. Ulf Norberg turned over his normal spot at the bench of Hedvig Eleonora’s impressive organ — the largest in the Nordic region — to the young organist Sebastian Johansson, and instead played piano and conducted the choir. Though he would return to playing Handel on Sunday, he was, for the moment, appreciating Avicii’s artistry. “His songs have classical elements — lots of long notes and broad lines,” Norberg said. “Some of the rhythms are tricky for the choir.”

In the past several years, churches throughout Sweden, including Hedvig Eleonora, have held “Abba Masses,” in which the choir belts out “Waterloo” and other hits by the group. (“Money, Money, Money” is a favorite accompaniment during the collection rounds.)

In Jonkoping, a city in southern Sweden, Ljungarum Church has also held services set to music by Sting, U2 and even the Jewish singer, Leonard Cohen. “We want to celebrate a service that can open up and touch people,” said Cecilia Sjoberg, the pastor of Ljungarum, where Avicii-inspired Masses were also held on Sunday.

One of the most secular nations in the world, Sweden has some of the lowest rates of religious practice in Europe — only 1.1 percent of the population attends religious services every week (compared with roughly 10.9 percent in Italy and 3.5 percent in Britain). Although 60 percent of Swedes still pay voluntary taxes to the church, only 18 percent of those under 30 say they identify as Christian, according to the 2016 European Social Survey.

Since losing its status as the official state church in 2000, the Church of Sweden has struggled to define its role. “Until then, it ran the hospitals, the schools, everything,” said David Thurfjell, a history of religion specialist at Sodertorn University outside Stockholm.

“It used to be Sweden,” he added. “Since then, it’s had to find a way to be a church when it’s no longer the system.”

Liljefors said he understood the problem. “It’s the people 20 to 49, whose lives are happy and busy, and who maybe feel like they don’t need Jesus — they’re the ones missing,” he said. “But there’s still a spiritual longing in Sweden. If we can find the right touch, maybe they’ll come.” He added that about 150 people usually attended Mass at the Hedwig Eleonora on Sundays and that most of them were older adults.

The church’s Avicii service had special weight because it was also a memorial for Bergling. An hour before the first Mass began, (a second had been added because of popular demand), the line stretched several blocks. Once the doors were open, the sanctuary, which seats 1,000, quickly filled; one guard brought in to manage the crowd estimated that an additional 500 had been turned away because of a lack of space.

At the end of the Mass, Norberg invited the congregation to stand for the final song of the evening. As the bluegrass-inflected chords of “Wake Me Up” pulsed from the organ, the worshipers sang along enthusiastically. A few — Liljefors among them — even danced a little.

Christopher State, 25, said that he had not been in church since his confirmation a decade earlier but that he had been moved by the experience. “The feeling of bringing everyone together, the emotions — it gave me goose bumps,” he said. Harpa Hjartardottir, 27, had come with friends she described as “really secular,” and was similarly effusive. “It was amazing,” she said. “Avicii became like a holy thing. And it got people like us to church.”

Although both Elin Lindroos, 23, and Martin Ornberg, 25, said they were not religious, they left open the possibility that they’d be back. “If they had more events like this, maybe I’d come,” said Lindroos.

Which is precisely why Liljefors is planning another pop music Mass for April. “That one will be more my music,” the 35-year-old pastor said. “Metallica.”

If you are having thoughts of suicide, call the National Suicide Prevention Lifeline at 1-800-273-8255 (TALK) or go to SpeakingOfSuicide.com/resources for a list of additional resources.