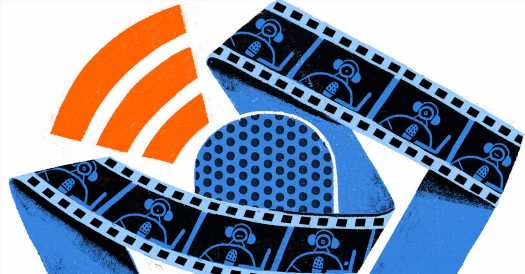 Fall is both the best and busiest time to be a movie fan, as we enter awards season — that thrilling period when the studios (and increasingly the streaming services) trot out their best hopes for Oscar glory. This year’s entries also arrive during a time of remarkable upheaval in Hollywood; a shaky summer at the box office and Disney’s takeover of the storied Fox movie studio were recent shocks to a system that has gone through seismic shifts many times before.

To help make sense of it all, whether you’re looking to keep up with the Oscar contenders, better understand the changing business or just dive into Hollywood history (the good, the bad and the baffling), here are seven movie-themed podcasts worth sampling.

One of the earliest players in the game, Filmspotting has been producing weekly installments of affable, insightful film analysis since 2005. Adam Kempenaar, one of its founders, has been a mainstay on the show from Day 1. His current co-host, Josh Larsen, joined him in 2012. Episodes typically begin with an in-depth discussion of one major new theatrical release, followed by a combination of filmmaker interviews, shorter theatrical reviews, Top 5 lists and anniversary retrospectives on classics (“American Beauty,” “Being John Malkovich” and “Fight Club” are among the recent picks). A reliable highlight is the podcast’s Massacre Theatre segment, in which the hosts gamely re-enact a scene and invite listeners to guess which movie it’s from.

Starter episode: “Once Upon a Time in Hollywood /Top 10 Tarantino Characters”

‘You Must Remember This’

From ‘You Must Remember This’

A must-listen for history buffs and cinephiles, Karina Longworth’s rigorously researched and hypnotically delivered series will change the way you see Hollywood. What began as a passion project — to delve into “the secret and/or forgotten histories” of the film industry and its legends, from the cult of Charles Manson to the horrors of the Hollywood Black List — has become a hit. The best illustration of the show’s evocative power may be the “Dead Blondes” series (from 2017), which explores the stratospheric rises and tragic ends of bombshells like Veronica Lake to Marilyn Monroe. Longworth acknowledges the inherent challenge in telling the truth about an industry that thrives on spin and deconstructs the myths around silver-screen icons, conjuring them instead as relatable human beings.

‘How Did This Get Made?’

From ‘How Did This Get Made’

You’ve likely never seen most of the movies discussed on “How Did This Get Made?” — which is just one of the many ways in which this consistently hilarious show evokes the pleasures of “Mystery Science Theater 3000.” The actors Paul Scheer, June Diane Raphael and Jason Mantzoukas host this irreverent weekly discussion that doesn’t aim to hate on cinematic duds so much as make detailed fun of them and semi-earnestly try to figure out how they came to be. Scheer, Raphael and Mantzoukas are such a winsome trio that the commentary doesn’t come off as negative; even when they discuss true duds like “Speed 2: Cruise Control,” their palpable love of movies shines through.

Though billed as a show about “screenwriting and things that are interesting to screenwriters,” “Scriptnotes” goes well beyond that remit to provide a deep dive into how the film business actually works. The two hosts, Craig Mazin (“Chernobyl”) and John August (“Big Fish”), offer specific advice on screenplay craft and structure, firsthand accounts of industry inner-workings, and conversations about the latest news — like the #MeToo moment, the Writers Guild of America’s ongoing standoff with talent agencies, and the uprising among Hollywood assistants over low pay and abusive work environments. The show’s regular Three Page Challenge segment, in which Mazin and August critique a sample of a reader-submitted screenplay, is invaluable whether you’re an aspiring screenwriter or a curious film fan.

Easily Britain’s most recognizable and beloved critic, Mark Kermode is known for his trademark quiff, his encyclopedic knowledge of the horror genre and his infectious passion for cinema. His Friday afternoon film-review show alongside Simon Mayo, a BBC Radio mainstay, has gained a cult following on both sides of the Atlantic since its genesis in 2001. Though affectionately called “Wittertainment” (after its hosts’ tendency to witter in charming but aimless fashion), the show packs in plenty of substance alongside the charismatic banter into its two-hour episodes. Kermode brings his sprawling, idiosyncratic movie knowledge to bear on the week’s new releases, his impassioned raves and furious rants offset by the deadpan Mayo.

The Ringer network, founded by the sportswriter Bill Simmons, might still be best known for sports coverage, but don’t sleep on its pop culture offerings. “The Rewatchables” taps into the universal joy of revisiting a favorite movie — and the less universal joy of doing it with a bunch of deeply knowledgeable friends. Each episode finds Simmons and a rotating cast of guests examining a movie that may not be an obvious classic, but is a culturally significant film that you’ve likely seen at least once. A recent discussion of “The Shining” addressed Stephen King’s hatred for Stanley Kubrick’s adaptation of his novel; the movie’s lukewarm critical reception and subsequent rise to cult status; and the cottage industry of conspiracy theories surrounding it, all within a snappy 75 minutes.

‘I Was There Too’

It’s notoriously difficult to get anything resembling the unvarnished truth out of Hollywood stars, who are often versed in public-relations speak, so the comedian Matt Gourley (“Drunk History”) had the smart idea to instead ask the supporting players for their takes. Though most of the podcast’s back catalog is now behind a paywall at Stitcher Premium, a handful of standout episodes are still available for free, including a candid “Star Wars” prequel trilogy conversation with Ahmed Best, who has the dubious pleasure of playing one of cinema’s most universally loathed characters, Jar Jar Binks.