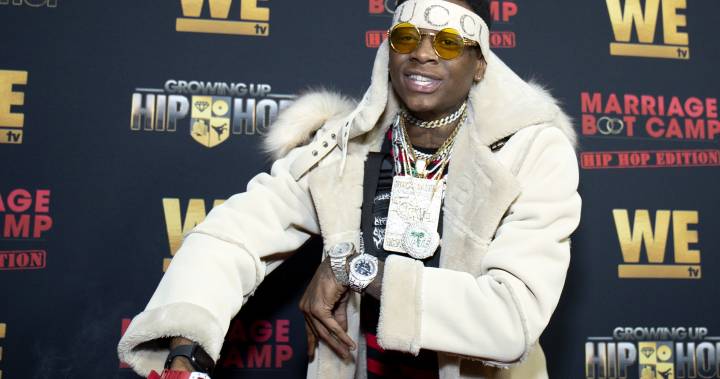 Crank That rapper Soulja Boy has been the subject of many punchlines after he announced that “had the biggest comeback of 2018.”

After taking to Instagram Live last week to announce he’s had a better comeback than rapper Tyga, fans and other rappers took their shot at imitating Soulja Boy’s rage and began the #SouljaBoyChallenge.

Soulja Boy, whose real name is DeAndre Cortez Way, stopped by The Breakfast Club on Power 105.1 in New York on Jan. 16 for an hour-long interview where he shared some very candid claims.

The interview offered Soulja Boy a chance to explain why he truly believes that he had “the biggest comeback of 2018” but the rapper also took the opportunity to make claims about Toronto hip-hop star Drake, Kanye West and U.S. President Donald Trump, Migos, creating the internet and much more.

Here are the top 6 candid claims that Soulja Boy made during his Breakfast Club interview.

1. He taught Drake “everything he knows”

When discussing how Meek Mill had beef with Drake — “the biggest rapper in the world,” Charlamagne Tha God said — Soulja Boy stood up and said “Drake?… Drake?”

“The ni**a that got bodied by Pusha T? The ni**a that’s hiding his kid from the world but his world want to hide from the kid? Aubrey Graham in a wheelchair… Drake?” Soulja Boy said in a higher-pitched voice.

“Stop playing like I ain’t teach Drake everything he knows,” Soulja Boy said after Charlamagne Tha God said that Drake is the biggest rapper in the world.

Soulja Boy went on to accuse Drake of stealing his flow from his 2007 track What’s Hannenin’ and using it for his Thank Me Later 2010 single Miss Me.

Case closed. Drake been stealing my drip for years‼️??‍♂️

“Y’all didn’t hear Drake on his first song?” Soulja Boy said before starting to sing the lyrics. “Tell me what’s really goin’ on / Drizzy back up in this thing, I’m ready, what’s hannenin’?”

“That’s Soulja!” the rapper yelled into the mic once he stopped imitating Drake.

“That’s my bar! He copied my whole fu**ing flow! Word for word. Bar for bar!” Soulja Boy screamed into the microphone.

Soulja Boy has claimed numerous times that he “created the internet” and invented the viral internet star.

The Crank That rapper said in the Breakfast Club interview that he was the first rapper to put a video on YouTube. The video he is talking about was the instructional YouTube video on how to do the Soulja Boy Dance to Crank That (Soulja Boy) in 2007.

“They said I killed hip-hop and now they doing exactly like I did and I’m being shunned upon. I’m the reason y’all doing this. I’m the reason why all these artists have social media. Y’all should thank me. Every artist in the game, all y’all record labels, y’all owe me five per cent, bro. … Y’all gon’ respect it,” Soulja Boy said.

“I came out with a whole video game console, bruh. I’m the first rapper to do that in history, bruh,” Soulja Boy said.

When he released his first videogame console, he originally expected to sell a few hundred systems but he received 20,000 orders and ended up getting backed up with the orders. He told The Breakfast Club that the consoles are on the way to the buyers and he said that all the games on the system are licenced.

Soulja Boy took issue with West comparing himself to Steve Jobs and Disney in the past. “You ain’t none of that, bruh,” Soulja Boy directed at West.

“Why you ain’t come out with sh*t then?” he questioned. “I came out with a whole video game console, bruh. I’m the first rapper to do that in history, bruh. You ain’t Walt Disney. You ain’t none of that, bruh.”

Soulja Boy continued to go off on West because of his support to Trump saying: “You up here supporting Trump and sh*t, bruh. You supporting Trump, bruh? What the f**k wrong with you? That sh*t’s not right.”

“We looking at you like you goofy, bruh,” Soulja Boy said of West.

The 28-year-old rapper encouraged West to call him or else he is “going to keep checking you.”

“I have sat back long enough and I’m not holding my tongue no more, bruh. Kanye, call me, get in tune with me cause if not I’m going to keep checking you,” he said.

4. He was the first rapper to fly Migos to Los Angeles

Soulja Boy claims that he was the first rapper to fly the rap trio Migos to L.A.

“Migos always been my brothers though,” Soulja Boy said after explaining the issue he had with Lil Yachty which led to Migos taking issue with him at the time.

He took credit for discovering Migos after they both recorded songs over the same Zaytoven beat. Soulja Boy recorded Teach Me How to Swag Part II and Migos recorded their 2013 breakthrough track, Versace.

“The Migos, that beat, Versace, that was my beat! That was my beat. Go on YouTube and type in Soulja Boy Teach Me How to Swag Pt. 2. It got three, four, five million views on that same beat. Zaytoven gave us the same beat. That’s how me and Migos met,” he explained.

Soulja Boy told The Breakfast Club that he was in the music video and Toronto rapper Drake was not.

“I was in the Versace video,” he said. “Drake wasn’t even there. He was on the song. Drake ain’t even show up. I love the Migos. They’d tell you that shit.”

5. The Fight That Never Was

The Kiss Me Thru The Phone rapper began a public feud with the R&B singer after he claimed that Brown threatened him for liking a picture on Instagram of his ex-girlfriend Karruche Tran.

The feud grew so large that the pair were advertising a highly-publicized boxing match. Soulja Boy took to social media to taunt Brown over his parenting skills and his past relationship with Rihanna.

Brown then challenged Soulja Boy to the boxing match and recruited Mike Tyson who vowed to teach Brown “every dirty trick in the book.”

Soulja Boy recruited Floyd Mayweather to train him. Brown bowed out of the boxing match, calling it “immature.”

“I seen a picture of Karruche and I liked the picture. At the time, I’m presuming, they was broke up. I liked the picture and, you know, I got a call from Chris Brown on FaceTime and he was just going off on me,” Soulja Boy shared.

Soulja Boy imitated the conversation: “‘What the f*ck ni**a. You better stop liking her pictures.’ And I’m just like ‘Bro, I didn’t know that y’all were still together. I’m sorry, my bad.’”

“I’m on the phone with him and I’m telling him, ‘I just liked a picture.’ I didn’t think nothing of it Ang,” Soulja Boy told host Angela Yee. “If I knew it was going to cause a beef and he was going to call my phone and tell me he wants to fight me, I would have never liked Karruche’s picture. It’s not that deep,” he explained.

Charlamagne Tha God asked, “So how did y’all get to the level where you wanted the smoke? Y’all were supposed to have a celebrity boxing match, you and Chris… what happened?”

“Basically what happened was he called my phone and said he wanted to fight. I said, ‘OK, cool.’ He said, ‘I’mma call Adrien Broner (AB) and I’mma set the fight up.’ That’s what Chris Brown said,” Soulja Boy said.

“AB called and said, ‘Lets do that fight.’ And he was trying to give me 1 million and I said, ‘Bruh, I’m not going to fight Chris Brown for one million, that’s cheap. Who you think this is? I’m Soulja Boy, ni**a,” he said.

“I called Floyd [Mayweather] and said ‘This ni**a Chris Brown want to fight me, you want to set it up for me?’ He said, ‘I’ll give you 7 million.’ So I was like, ‘Cool, that sounds about right.’ So we set it up and I signed the paperwork and Chris Brown backed out and didn’t sign the paperwork. And that’s the end of it,” Soulja Boy said.

Charlamagne The God asked if Soulja Boy has seen Brown since the feud and the rapper said, “Yeah.”

“What happened?” Chalamagne The God asked.

“Sh*t, not a damn thing. It’s over with,” Soulja Boy revealed.

Tyga made a huge comeback with his song Taste featuring Offset after being down for several years.

Soulja Boy made himself relevant again by taking to Instagram Live and criticizing anyone who believed Tyga had the biggest comeback of 2018.

The rant went viral, causing many celebrities such as Brampton singer Tory Lanez, Lil Yachty and Trippie Red to take part and do their best Soulja Boy impression.

When he visited The Breakfast Club, Soulja Boy was asked to explain why he truly believes he had a bigger comeback than Tyga.

Soulja Boy changed his tune when he was asked if he would be down to collaborate on a song with Tyga.

“I love Tyga,” Soulja Boy said. “I can’t wait to do a record with him but, at the same time, you ain’t have no biggest comeback, bruh.”

Who had the biggest comeback of 2018?