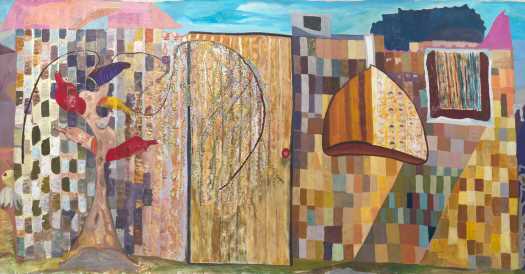 The painter Ficre Ghebreyesus (1962-2012), who makes his New York solo debut with the show “Gate to the Blue,” traveled a long way in his cut-short life. He was born in Eritrea, East Africa, and left at 16 to escape the country’s brutal war of independence with Ethiopia. He traveled on foot to Sudan and lived as a refugee in Italy and Germany. In 1981, he settled in the United States, where he studied painting at the Art Students League in New York and at the Yale School of Art and supported himself for years as a restaurant chef in New Haven, Conn.

During these years in exile, he became fluent in multiple languages, spoken and visual. In a mural-size painting on unstretched canvas titled “Zememesh Berhe’s Magic Garden,” an enclosing “wall” of Eritrean-style geometric patterning serves as backdrop for an African-American bottle tree. And much of his work — semiabstract, opaquely autobiographical — has a dreamlike cast. In “Mangia Libro,” titled for a nickname — “book-eater” — that his family gave him as a child, he depicts his younger self absorbed in reading as he walks away from what looks like a line of monumental buildings toward a subaqueous realm of fantastic fish and plants, all done in colors Matisse would have relished. 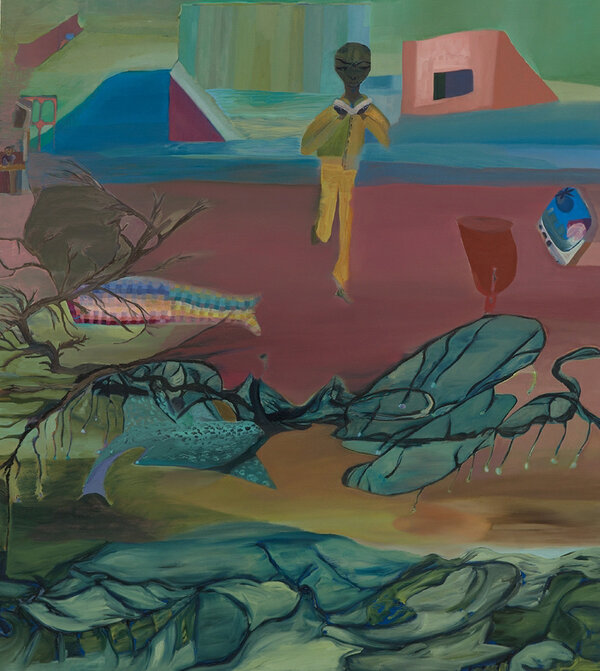 And large histories, beyond the personal, are ever-present in his art. These include repeated references to the Middle Passage of the trans-Atlantic slave trade. In a few cases the subject of exile is directly named, yet it can be read obliquely everywhere in the show. Taken together, two small pictures, one of an unmanned boat, the other of a soaring seabird, might be asking: What is the difference between being cut adrift and flying free?

Mr. Ghebreyesus’s appetitive colors makes his art instantly magnetic, but it is his images — boats, animals, musical instruments, angels — that write stories in the mind. Visual poetry is a phrase overused and underdefined. But you know it when you find it, and you find it here.
HOLLAND COTTER

During the early years of U.S. military involvement in Iraq and Afghanistan, the New York painter Steve Mumford traveled numerous times to those war-torn countries as an embedded artist with American troops and made drawings he would often turn into oil paintings.

“Drawings From America’s Front Lines” at Postmasters finds Mr. Mumford back in the combat zone — only this time the scenes are shockingly local and recent: New York in the midst of the coronavirus crisis, Black Lives Matter protests and campaign rallies for Donald Trump. A field hospital set up in Central Park for Covid-19 patients brings home the warlike trauma of dealing with the virus, as does a drawing like “Photojournalists Outside Wyckoff Medical Center, Brooklyn, NY, Apr. 7, 2020,” an ink and watercolor work on paper depicting a scene of a virus hot spot. Other works, like “Anarchists Campsite, Lownsdale Square, Portland, OR, Jul. 25, 2020,” and several drawings and watercolors of Trump rallies and supporters capture the tumult of our time.

Rendered in pencil, ink and watercolor Mr. Mumford’s drawings — including texts from overheard conversations — are reports from the field, but also vividly expressionistic. (He also works from photos taken with his iPhone.) Thousands of photographs of these events are circulating on the internet, but Mr. Mumford’s drawings show what it means for an artist — expert draftsman and commentator — to bear witness and document history.
MARTHA SCHWENDENER

The wall-mounted works that make up most of Manal Kara’s exhibition at Interstate Projects offer an enjoyable kind of sensory overload. The arched ceramic frames are textured and bulky, evoking old stone windows, but with modern, often cryptic images and texts embedded in them. They enclose photographs printed on cotton and held in place with string looped through grommets, recalling the D.I.Y. aesthetic of camping gear. Those pictures have other, smaller fabric photos pinned to them.

The meaning of the pieces is hard to decipher; they seem diaristic and observational, structured by their own logic. They create the effect of a mood board: Your eye doesn’t quite know where to land.

Kara, a self-taught artist and poet who uses the pronoun “they,” includes many photos of wildlife. Often, they seem to be drawing connections between the natural and man-made worlds, as in “cherry grape blueberry (syntax error system shutdown)” (2020), where the coiled form of a snake echoes an image of a tire. The phrase “yesterday was here today” is written on the frame like a koan — but maybe also a clever advertisement. After all, the tire image is part of a commercial sign.

One conceptual key may be in the show’s title, “The Viewing-Room vs. the Adoring-Gaze,” and the news release, which comes from the artist’s dream journal. It’s a surreal, parodic script for an infomercial, narrating a journey from a series of clinical spaces, called “viewing rooms,” to a field filled with cows “gazing intently with their huge beautiful fringed eyes.” This exhibition is a product of Kara’s own adoring gaze. The artist is modeling a way to look.
JILLIAN STEINHAUER

You have just a day or two left to catch Cheyenne Julien in her New York solo debut, “Phantom Gates and Falling Homes,” at Chapter Gallery. (The online viewing room remains live through the end of the month.) I’ve been trying for weeks to articulate what’s so exciting about how this young painter from the Bronx handles color, and her knack for including drips and unfinished but patently purposeful brush strokes. And my mind keeps coming back to a line I recently overheard in a children’s cartoon: “A rainbow only comes out when it’s rainy and sunny at the same time.”

The line goes especially well with a small painting called “Treading Water.” When Ms. Julien began the piece, according to the gallerist Nicole Russo, it showed an apartment window filled with hand-drawn thank-you signs for essential workers. Later, in response to news of police officers destroying water bottles and other supplies at Black Lives Matter protests in Asheville, N.C., Julien overlaid the window with the arm of a heavily uniformed man stabbing plastic bottles with a knife. You can still see a rainbow on one of the signs, part of it through the officer’s forearm. But the painting’s two subjects don’t synthesize: They’re simply both happening at once.

It’s an honest way to confront an overwhelming moment, and while simple enough on its face, it’s hardly easy to do so adeptly. But what’s most striking is seeing Ms. Julien use the same confident iridescence to take in the complexities of memory, race and her native city in more straightforwardly personal views. In “Master of House,” the artist’s father rests one bare foot on a copy of Marvin Gaye’s album “What’s Going On”; in “Black Out,” Ms. Julien recalls, with children playing at an open hydrant, a moment of joy during New York’s 2003 blackout.
WILL HEINRICH

‘The Crown’: Australia’s ABC Calls Out Netflix Show For Inventing Quotes About The Queen Being A “Pig”
ENTERTAINMENT