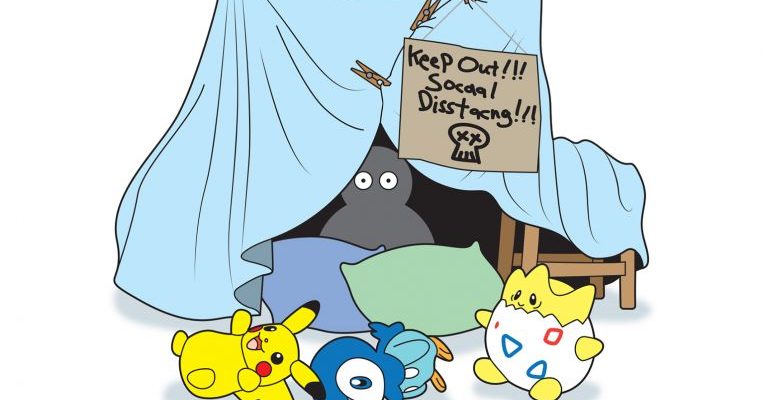 My son, Adam, refused to come out of his cave for a whole day. Well, it’s not a cave, really, more like a tent built out of two chairs, a kid-size bed sheet and a dozen or so clothes pegs.

He was upset and wanted to be left alone, he announced to us. The night before, we had watched a news report on television, fully absorbed in the images of medical personnel clad in blue PPE suits sticking long sticks deep into people’s noses, patients lying on beds, their deathly pale faces mired in helpless misery. My son, beside me, had watched all this silently, and who knows what he had understood or not understood from what he had seen.

“Do you want to come out?” I asked, kneeling beside the tent. Pikachu and his merry band of friends, Piplup, Sparky and Togepi, playing all over the bed sheet, in bright fiery colours.

“Can I stay outside?

I tried to lure Adam out with treats of ice cream (chocolate, his favourite) and bags of Skittles candies, more play time on my mobile (Roblox, 30 minutes, max). But he remained firm, stoic, unconvinced. On the closed flaps of the entrance, he had hung a torn piece of cardboard with a warning: Keep Out!!! Socaal Disstacng!!! Below the marker-penned words, a round skull with Xs as eyes and mouth.

“Come out, come out and play,” I cajoled, in the scary voice of the big bad wolf.

“Very soon. You can go back to school again and see your friends.”

Nothing from my son. A pall of silence.

“We can play badminton at the void deck, when it’s all over,” I added.

Adam made a vague noise behind the flaps. And then he retreated farther into his cave, his movements small, timorous.

My eight-year-old son, born six weeks premature, weighed less than 2kg when he entered the world. In the incubator, he looked frail and lilliputian, a bundle of loose skin folds and wrinkles, the tubes running out of his face and body like so many tentacles. My octopus son, I called him. He barely moved, only his chest, rising and falling in rapid tiny tremors, revealed the slightest sign of life.

That night, outside my son’s cave, I told him the amazing story of his birth. I couldn’t tell whether he was listening, but I could sense his studied stillness behind the bed sheet. I told him about the incubator, how he had needed a machine to breathe, and how he had breathed! Like every mouthful was a deep gulp of fizzy Sprite (his favourite soft drink). My son broke into a laugh then, which sounded like a series of gassy hiccups.

“Papa is here. I’ll protect you, I promise.” I attempted my best voice impression of Batman, low and gravelly.

That night, I stayed outside the tent, my son’s cave, and told him all the stuff we would do once things got better. He would accompany me on my weekend runs and I’d take him down to the playground to play more often. Three, no, four times a week, my son added. We would go to the McDonald’s at the park near our flat and order large fries that we would eat with our chocolate sundaes.

We, or I, talked for a long time and, at some point, my son must have fallen asleep on the other side of the tent, his breathing soft but audible behind the bed sheet, mere centimetres from me.

In the morning, I woke up with a start and saw that one of the flaps of the tent was lifted. I crawled to the entrance, hoping to catch my son sleeping inside. The cave was dim and silent and empty. No one was in there.

My son, free and awake, wherever he was, had finally come out of the cave.

• O Thiam Chin, 42, won the inaugural Epigram Books Fiction Prize for his 2016 debut novel, Now That It’s Over. He has published another novel, Fox Fire Girl (2017), and six short story collections including Signs Of Life (2019). He spent the circuit breaker working on a new novel and reading literature in translation.