Robert Kobayashi (1925-2015) — whose work is the subject of the rigorous yet endearing show “Moe’s Meat Market” — was one of New York’s great outlier artists. He had a brief phase as an Abstract Expressionist, but in the early 1960s devised his own folk-artist version of pointillist painting, packing the signature dots of the style so close together that his textured images seemed solid. How solid? Trees resemble broccoli crowns.

In the 1970s, Mr. Kobayashi made this solidity real by nailing little brush-stroke-size pieces of cutout tin to wood, either flat or carved in the round. Animated by swarms of tiny dots — the nailheads — these surfaces are endlessly engaging: At once armored and delicate, fierce and charming, they record the forming process with unusual clarity. The colored tin might depict shadowy, Giorgio Morandi-like still lifes, as in “Square Cup,” and hang on the wall, or cover portrait busts that sit on pedestals — in this instance the heads of two women with blown-back hair, “Fumiko in the Wind” and “Bobby Chung’s Sister.” Either way, Mr. Kobayashi’s efforts operate in the gap between painting and sculpture; Donald Judd might have called them “specific objects.” 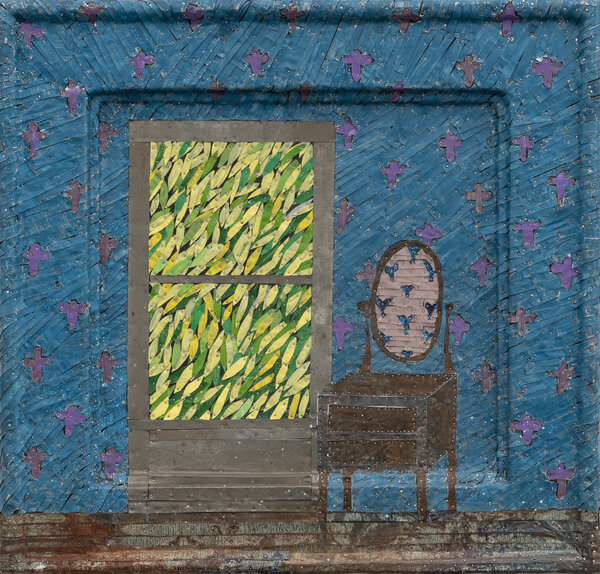 Having found his ideal medium, Mr. Kobayashi, who never took much interest in gallery representation, found his ideal showplace: the storefront of a tenement building at 237 Elizabeth Street that he bought in 1977 for $35,000 (much of it earned working in the registrar’s department at the Museum of Modern Art). He left the previous tenant’s shop sign intact: Moe’s Meat Market. And the rest is little-known local history. For the next 40 years, his displays startled and delighted passers-by and made him a neighborhood hero. This exhibition is his first in a Manhattan art gallery — other than Moe’s — since 1981. It should not be missed. ROBERTA SMITH

Representation is hardly enough; what counts is freedom. For the Nigerian-American artist Toyin Ojih Odutola, drawing is a medium of withholding as much as depiction, and her carefully worked portraits gain their power from the subtle cues in clothing, setting or facial expression that allow us to imagine, but never fully perceive, their subjects’ full lives.

The drawings in “Tell Me a Story, I Don’t Care If It’s True,” her affecting, enigmatic new show at Jack Shainman Gallery, are smaller than in previous shows, such as her 2017 breakout presentation at the Whitney Museum of American Art, and staged in melancholy medias res. Most depict their subjects from the head up, gazing downward, lost in thought, turned to the wall. They were made during the spring lockdown, and they’re accompanied by handwritten mini-narratives that are as elusive as the drawings. Both image and text are placed off-center in large mattes, like pinned butterflies.

The subjects are exclusively Africans or people of the African diaspora, and their skin tones range from golden brown to jet black, which the artist habitually renders with tight bunches of lighter and darker grooves. The grooves recall the scarified faces of West African bronze statuary, yet, more than ever, the whorls and striations of Ms. Ojih Odutola’s pens and pencils make these skins appear like bundles of fascia — as if her figures have no skins at all. Frequently they look like écorchés, the figure studies of skinned nudes that 18th- and 19th-century art students practiced to learn anatomy; one female nude in the shower, whose cheeks and clavicle have been rendered with strong white contours on her black skin, seems to be nothing but muscle and blood.

“I’ve never lied — never had to,” reads the text accompanying one of this show’s starkest drawings, of a woman whose white headwrap sets off a face of rich black furrows. “Perhaps, I have a face some might question. It helps to focus on core beliefs.” It is that focus that Ms. Ojih Odutola delivers more forensically than ever here, and her art’s principal virtue is to remain ungraspable even when it lays itself bare. JASON FARAGO