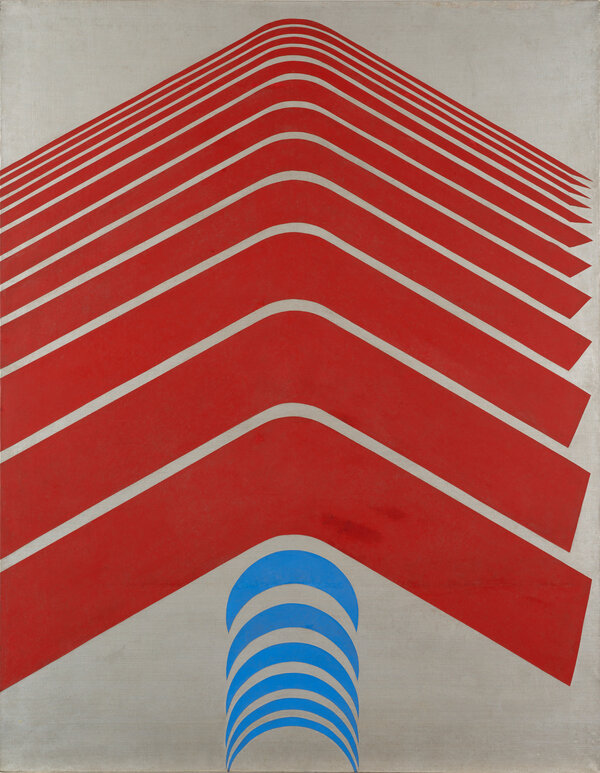 Minoru Yoshida grew up playing the piano, studied painting in Kyoto, Japan, and briefly ran a kimono-dyeing firm before joining the avant-garde artists group Gutai in 1965. In 1970 he moved to New York, where he spent eight years staging futuristic performances — think synthesizers and plexiglass — before returning to Japan, where he continued performing and making art until his death in 2010.

You can see it all in the eight hypnotic paintings comprising “Wave of Light” at Ulterior Gallery on the Lower East Side. Made in the mid to late 1960s and never before exhibited in the United States, they feature hard-edge sine waves, circles and stripes with hypnotically ambiguous effects. The angled red lines that climb a matte-silver background in “Just Curve ‘Red’” get thinner as they ascend, evoking both depth and motion without quite settling on either, while their stark bend subtly brings to mind the iconic triangle of Mount Fuji.

A yellow sine wave, in a 1965 canvas with title unknown, crashes into another set of diminishing stripes, this one dark blue. You might think of a diagram on a stereo receiver, somewhere between the AM/FM switch and the volume knob. But the wave form is a little too thick for that, the colors too bold, the whole composition too grand and dreamy. Call it instead the flag for some hypothetical commune on the moon. WILL HEINRICH

The prismatic paintings in “Crichoues Indignation,” Caitlin Cherry’s show at the Hole in the East Village, delight in double entendre. They expand on the world Ms. Cherry laid out in an online viewing room earlier this year — densely layered, kaleidoscopic compositions of women employed at a Brooklyn cabaret. In “Cricheous Indignation,” she paints dancers, servers and Instagram models — all young Black women whose bodies are primary to their livelihoods — the canonical female nude as online influencer.

Ms. Cherry, whose work collides painting and sculpture, is interested in the way Black culture — specifically Black womanhood — propagates online and inevitably becomes commodified. She’s also interested in how we consume that information, which often means digitally. Barely legible numbers hover like ghosts over her subjects’ bodies, hinting at the algorithms that govern online life, but also watermarks that deter copyright infringement. Ms. Cherry builds in Fauvist, mesmeric bands of color so that, depending on where a viewer stands, the fields of a painting, like “69 Syntax City,” dance like rippling silk, aping a photographic moiré effect that interrupts the image. Each painting features a small window of a male figure sourced from streaming sites, their intrusion a deference to our Zoom-addled existence, and the pesky, persistent male gaze. Ms. Cherry’s paintings aim to short-circuit the idea of looking.

In the back of the gallery, a massive structure resembling a computer server houses images from the earlier online exhibition printed on retractable scrims — the online returned to the material plane, almost. One panel is accessible only via secret key code, provided by Ms. Cherry to her “close friends” list on Instagram, a subtle institutional critique, of the sale of editioned digital art, a reminder that there’s more than one way to control beauty. MAX LAKIN