Sign up for the BuzzFeed News newsletter JPG for behind-the-scenes exclusives from renowned photographers and our hard-hitting photo stories. 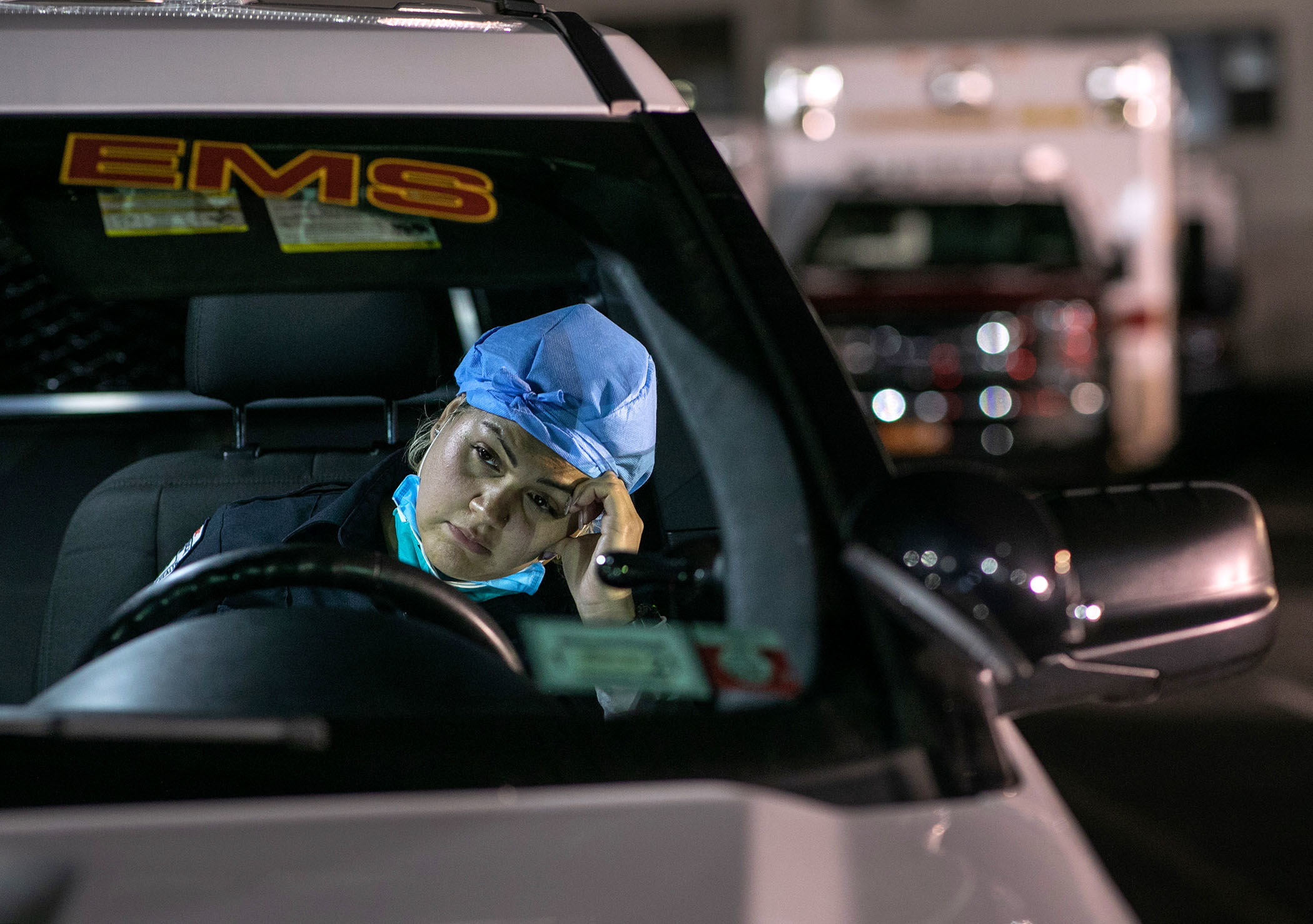 Paramedic Patricia Rodriguez fills out reports on a laptop after her 12-hour shift in Yonkers, New York, April 6. Empress EMS paramedics and EMTs wearing personal protective equipment treat and transport patients to hospitals throughout Westchester County and parts of New York City, the epicenter of the coronavirus pandemic in the United States.

Across the nation, medical professionals are working tirelessly on the front lines of the coronavirus pandemic to save lives despite the tremendous risk of illness and psychological distress. Last week, BuzzFeed News reported that at least 5,400 health care workers have contracted the virus and dozens have died due to complications from COVID-19. Because of the lack of reliable testing and tracking, it’s likely that this number is severely underreported.

With the US health care system already pushed to its brink, many in the line of duty are being asked to work long hours and to remain socially distant from their families and loved ones, while reports of dwindling supplies and lack of personal protective equipment (PPE) reveal an added danger to an already volatile situation.

Getty Images photographer and special correspondent John Moore has been documenting the ongoing health crisis since March 2020, when a cluster of COVID-19 cases at Life Care Center in Kirkland, Washington, became the epicenter of the outbreak in the US. As the virus continued its spread across the country, Moore shifted his focus to the emerging epicenter of New York and its health care workers fighting to save lives on the front lines of the pandemic.

Here, Moore shares with BuzzFeed News these powerful images and discusses what it’s like to cover America’s largest health crisis in a century. 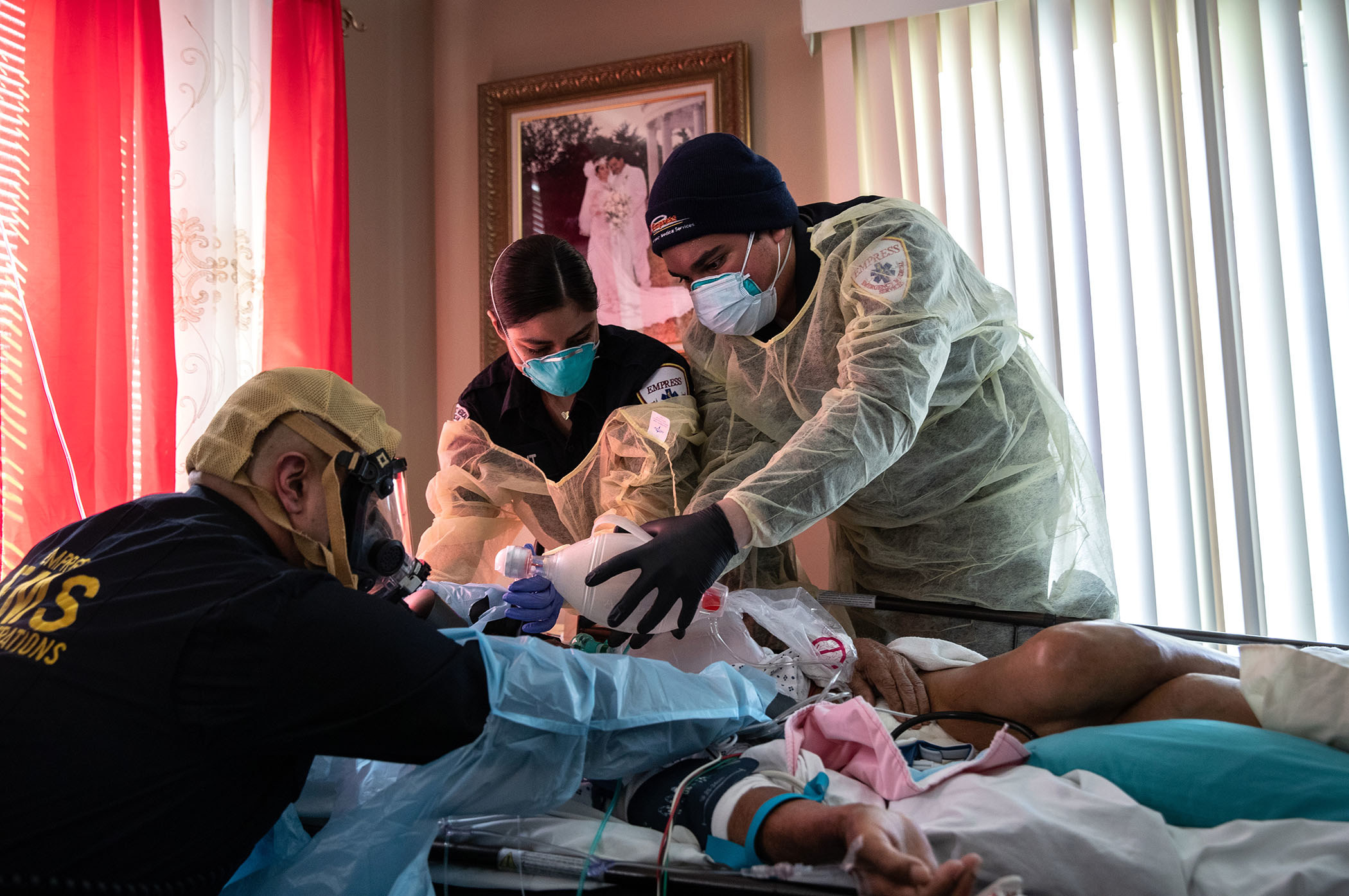 Medics wearing personal protective equipment intubate a gravely ill patient with COVID-19 symptoms at his home in Yonkers, New York, April 6. The man, 92, was barely breathing when they arrived, and they performed a rapid sequence intubation on him before transporting him by ambulance to St. John’s Riverside Hospital. From left: The medics are Capt. AJ Briones, Michelle Melo, and Carlos Cabrera. 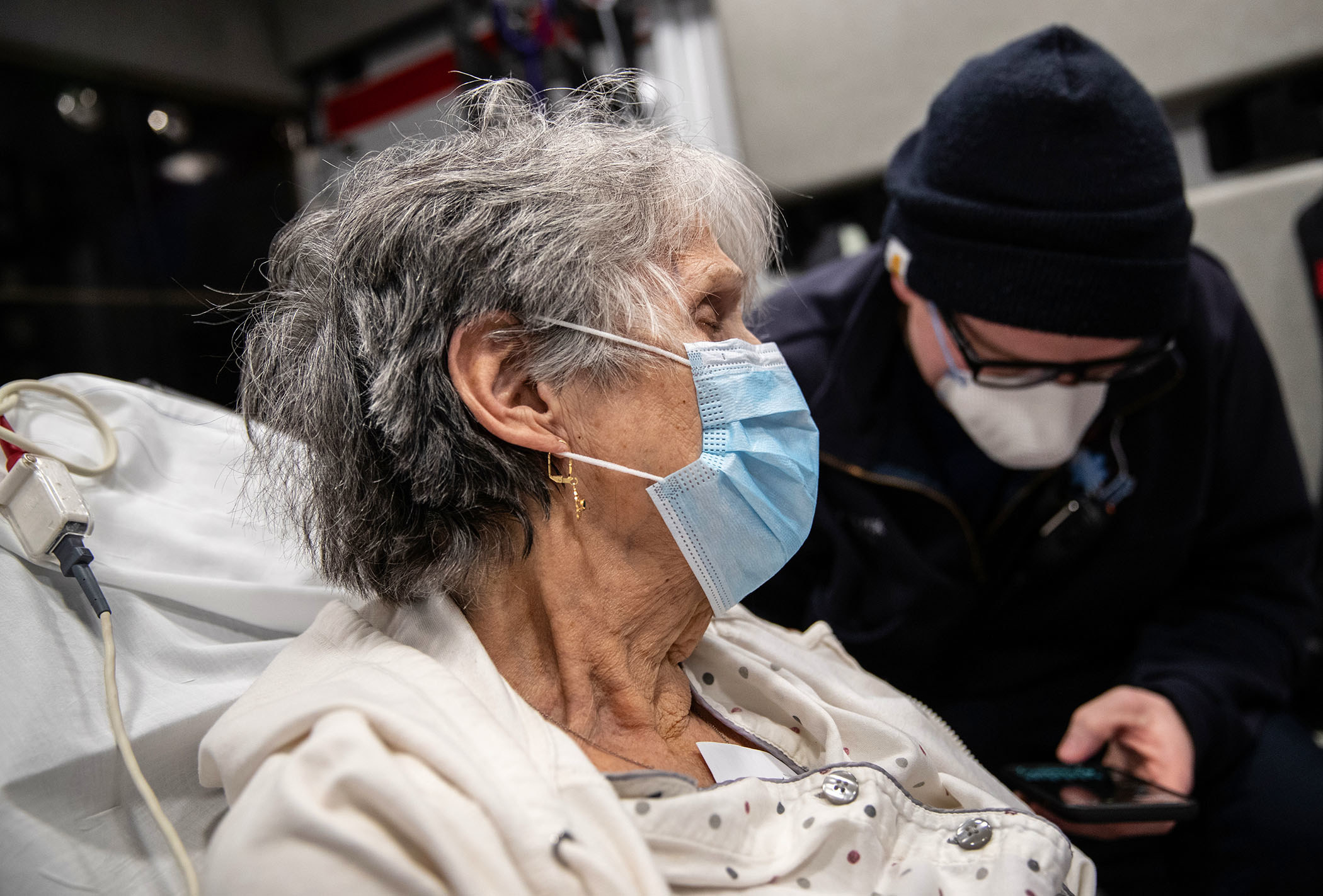 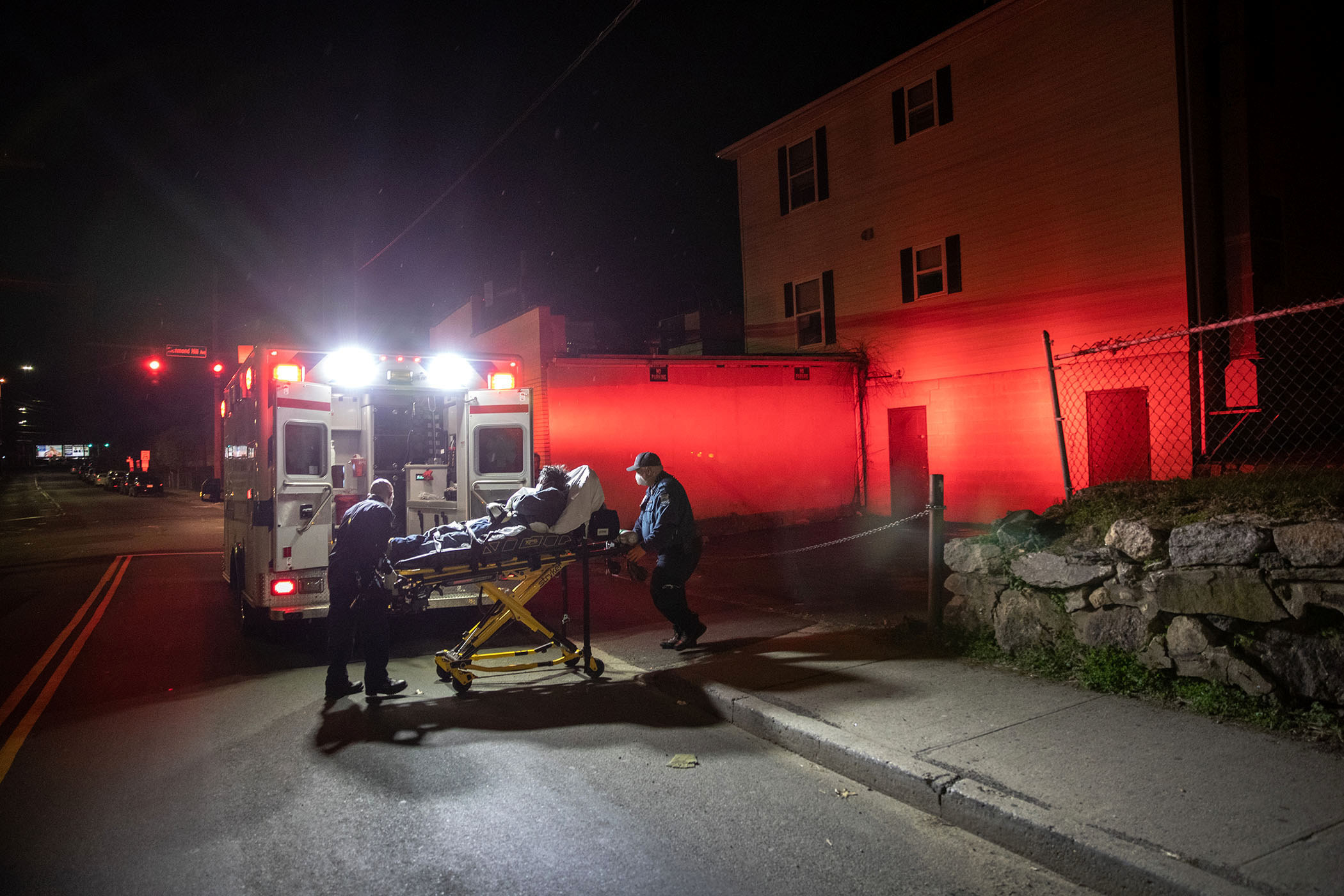 Medics with Stamford EMS transport a patient to Stamford Hospital in Stamford, Connecticut, April 2. Stamford, located close to New York City, now has more than 1,000 confirmed coronavirus cases, the most of any city in Connecticut. The majority of Stamford EMS calls are now for coronavirus patients.

Can you speak on how your coverage of the current health crisis started?

John Moore: I’ve been in the business for almost 30 years covering conflicts, social issues, immigration, and the Ebola epidemic of 2014 in West Africa. I was recently in Australia covering the effect of the bushfires on wildlife in early February and at that point could not have imagined that I’d be covering the story that I’m covering now.

I had been back in the US for about a month when I was sent to Seattle to cover the early part of the COVID-19 epidemic in the Northwest. I could see in some ways a harbinger in Seattle for things to come for the rest of the United States. Downtown was emptied, the nearby Life Care Center in Kirkland, Washington, had dozens of deaths of seniors, and many medical personnel and first responders were being infected. That situation would be repeated not only in New York City, but in many parts of the United States.

I could see this very early on. 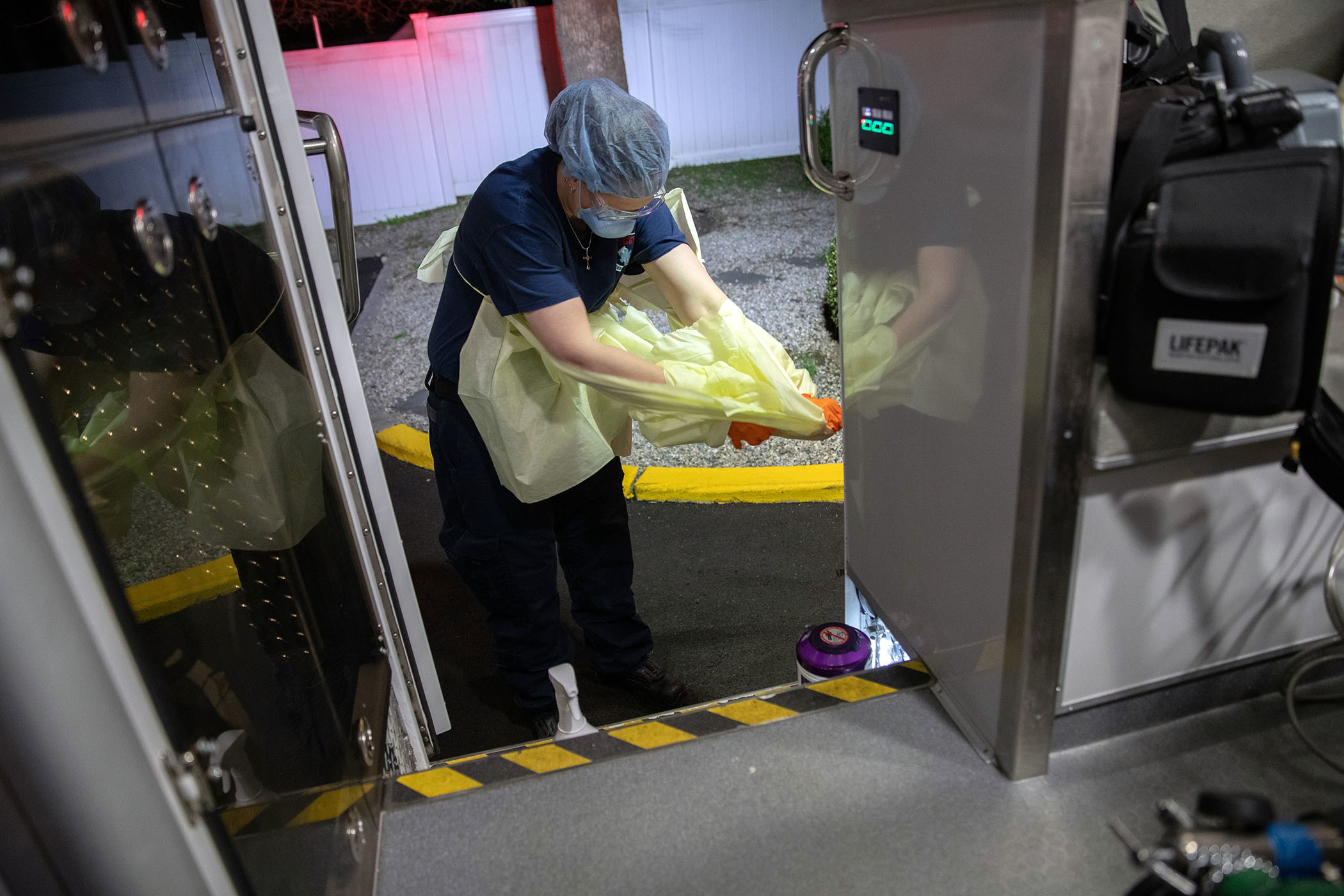 The situation has evolved in that it’s become nationwide. When I first began covering the pandemic in the US, it was more local and regional. I think we all know that by the time it was obvious that Seattle had a problem, it had already spread to other parts of the US but had not yet been reported due to the time it takes for the virus to incubate.

I’ve seen this grow and become a national phenomenon. When the epidemic started to spread in the New York City area, I came back and began concentrating my work on the suburbs. While the main epicenter is in the city, the suburbs are highly affected as well. So that’s where I concentrated my energy.

What precautions do you take when working in potentially dangerous environments?

I first learned how to use personal protective equipment while covering the Ebola outbreak while in Liberia — of course, the viruses are very different. Ebola has a much higher mortality rate but is more difficult to contract. COVID-19 spreads easily but does not kill the majority of people it infects, so the protocols are different. 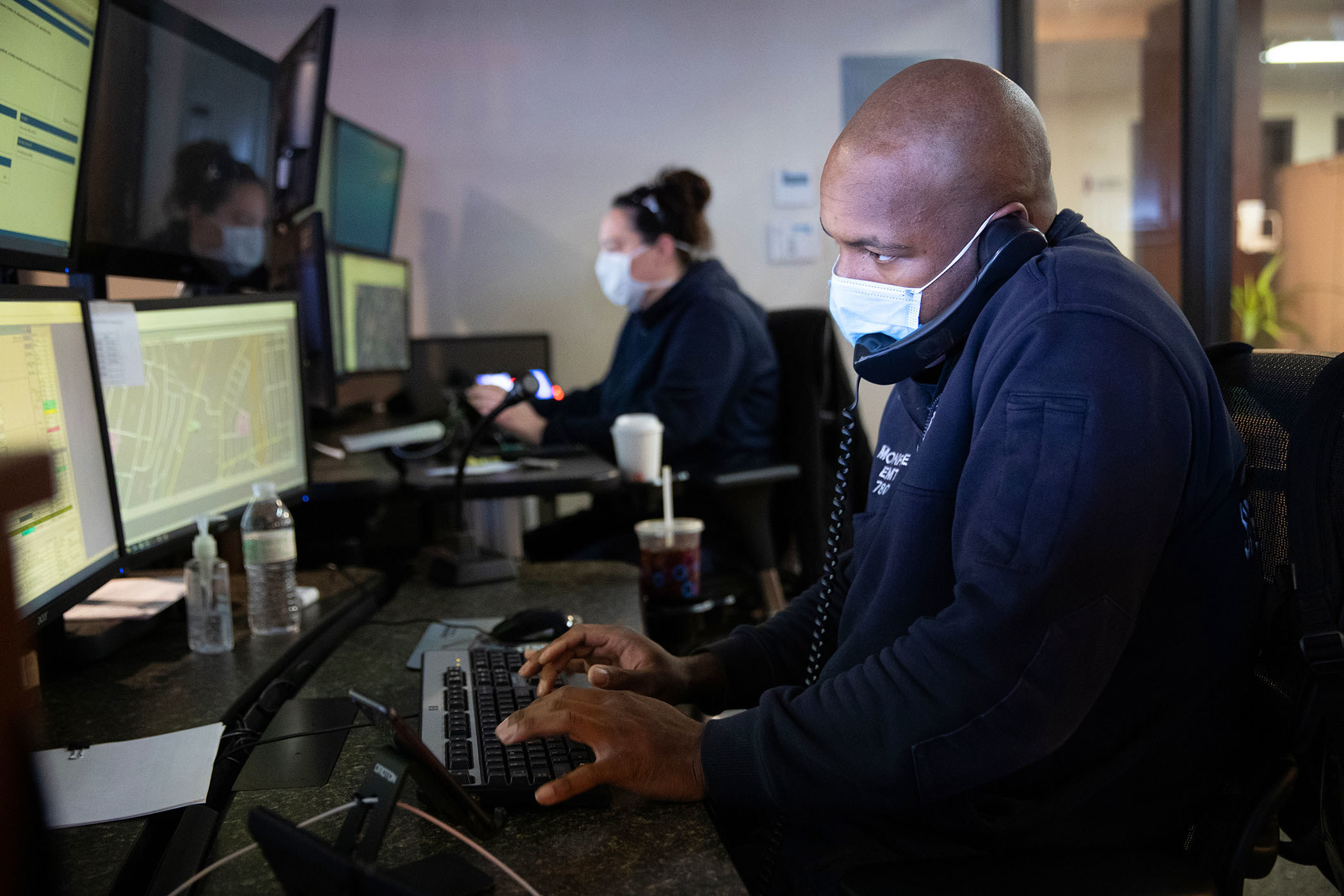 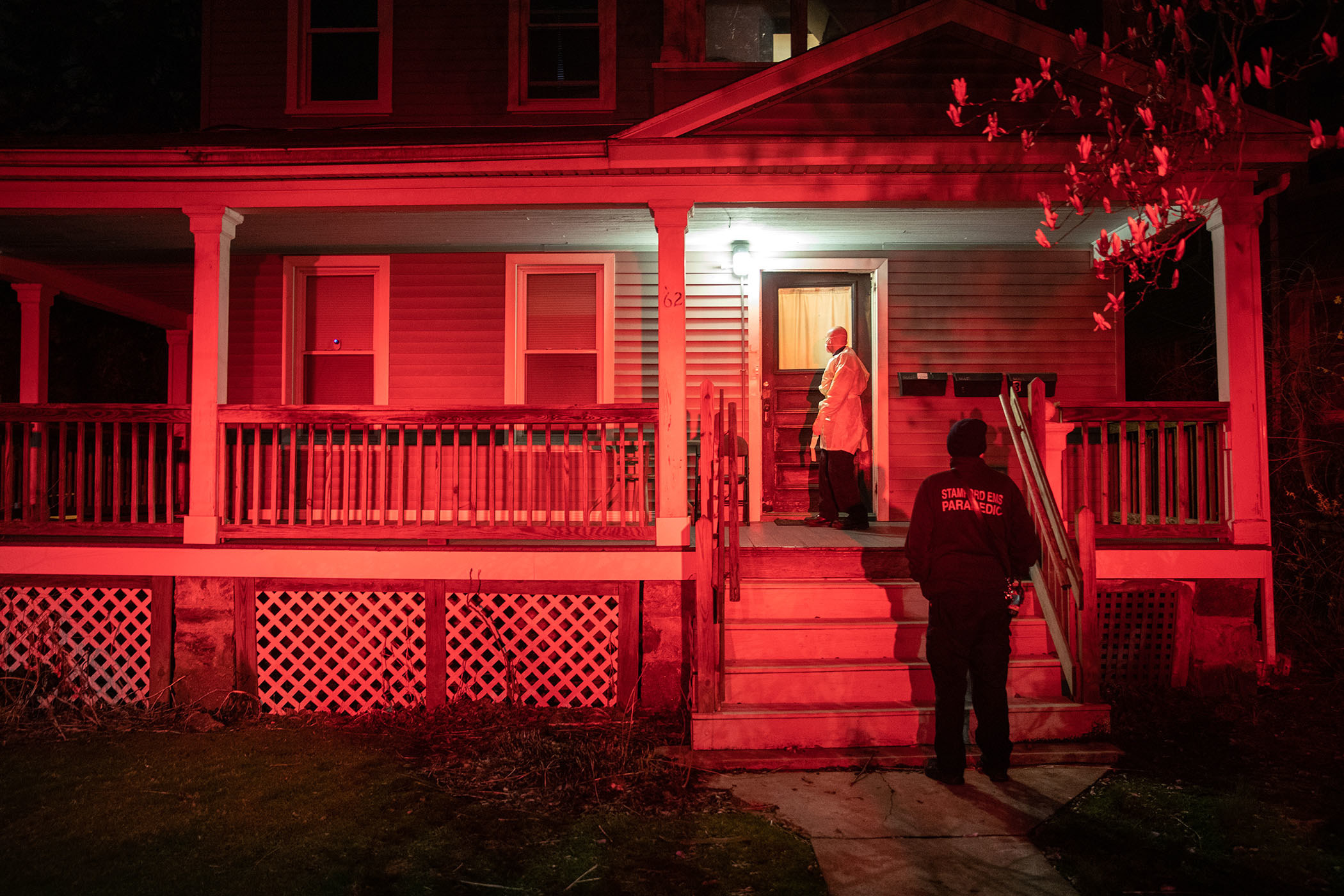 EMT Dan Wellen waits for a patient with possible COVID-19 symptoms before taking her by ambulance to Stamford Hospital in Stamford, Connecticut, April 3. 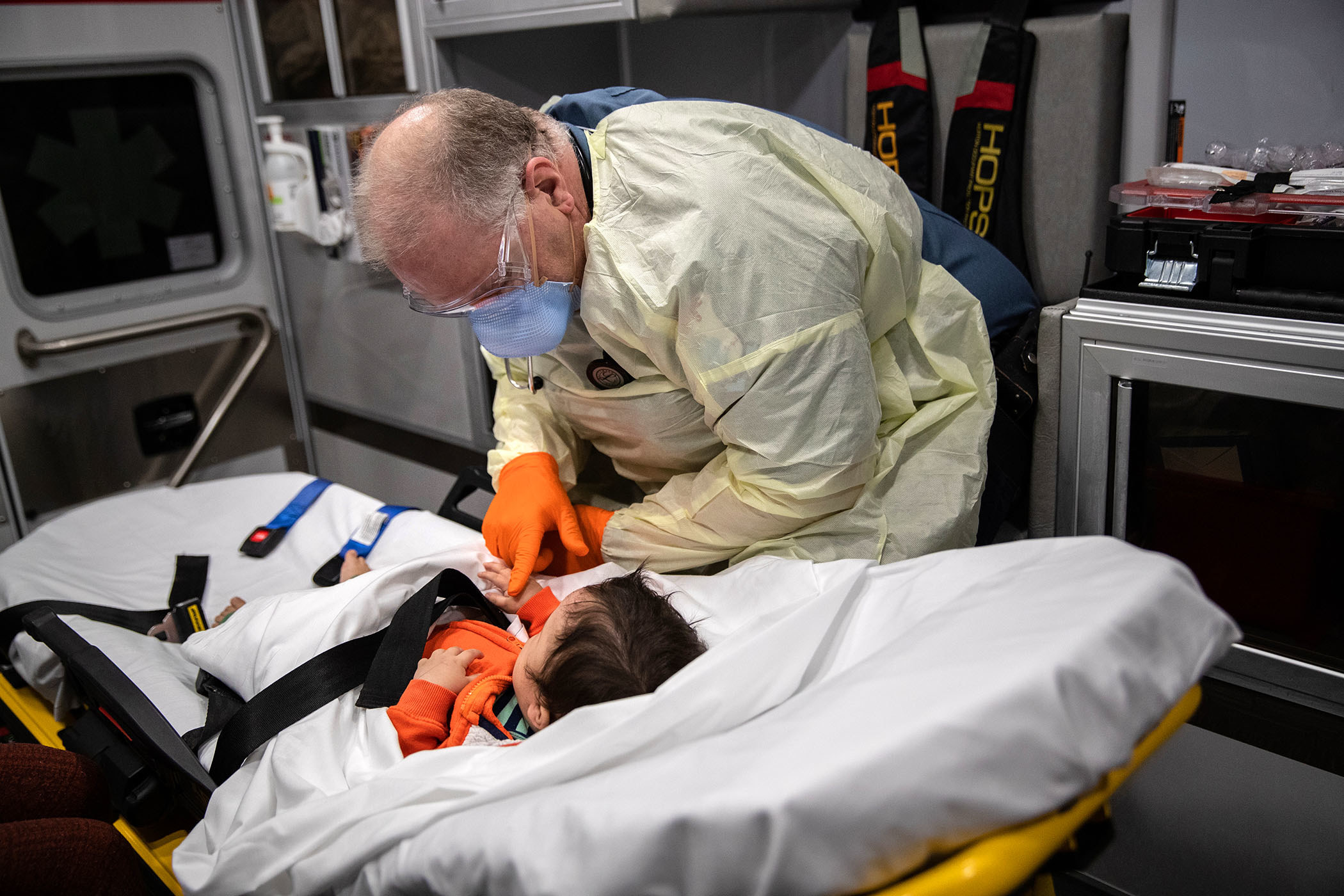 Paramedic Randy Lilly sits with a 10-month-old boy with a fever while riding by ambulance to Stamford Hospital in Stamford, Connecticut, April 4. Fever is a common symptom of COVID-19, although cases with young children are relatively rare. The child’s status is unknown.

The level of PPE that I wear really depends on the situation I’m photographing. At times I’ll wear full PPE, which includes a full-faced ventilator, a Tyvek suit, two pairs of latex gloves, and usually something covering my boots. I also generously use bleach spray, disinfecting sprays, and rubbing alcohol. In other environments, only an N95 mask and gloves are required.

I should mention that although journalists covering this story are in danger, it’s nowhere near the level that health workers must endure. They’re touching people constantly while caring for them, whereas I try to touch nothing but my camera.

How are you able to separate the human impact and the anxiety of these hostile situations from your craft as a photojournalist?

What gives me strength in this profession is the belief that what we do as photojournalists matter. I believe that allowing people to see what’s happening on a human level helps the public empathize with those who are suffering. I want these pictures and this story to be more than just statistics — I’d like people to see really what it looks like.

Of course, this is a very delicate story to cover and I try to photograph people in a way where they feel like they’re part of the story, that they’re taking part in the coverage. I always try to handle the people I’m photographing in a sensitive way. 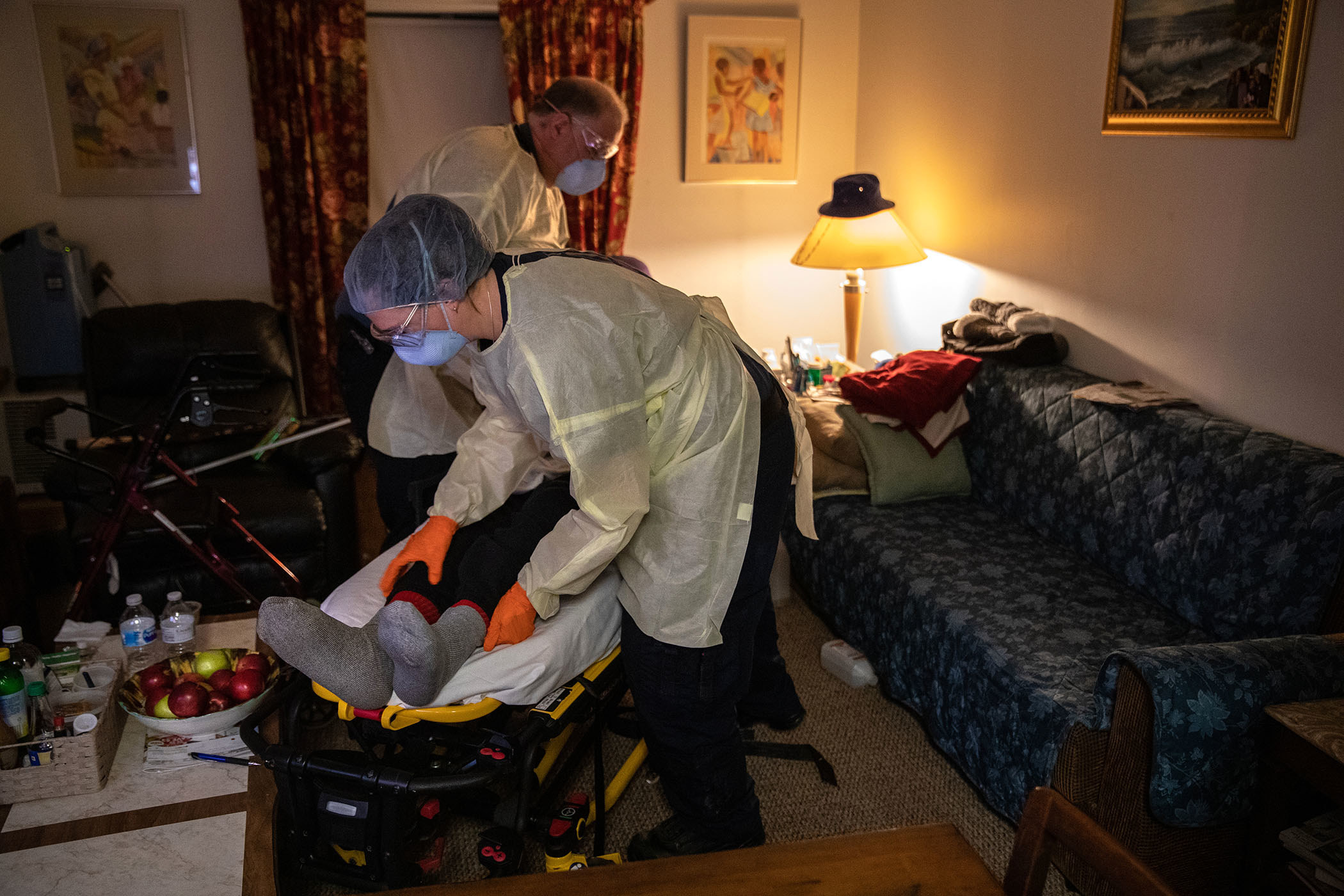 What do you want people to know about the health care workers you’ve photographed?

EMS workers are really the front-line first responders during this fight against COVID-19. They are the front of that front line and expose themselves to horrific scenes all day long. They work extremely long hours and have great dedication for the sole purpose of saving people’s lives.

I think the public does appreciate what they do, but I think it’s also helpful for people to see photographs of these people in action. These are individuals who often work not just 12-hour shifts, but near 24-hour shifts, and it’s extremely tiring work. But they believe in what they’re doing and the public is much better off for them. 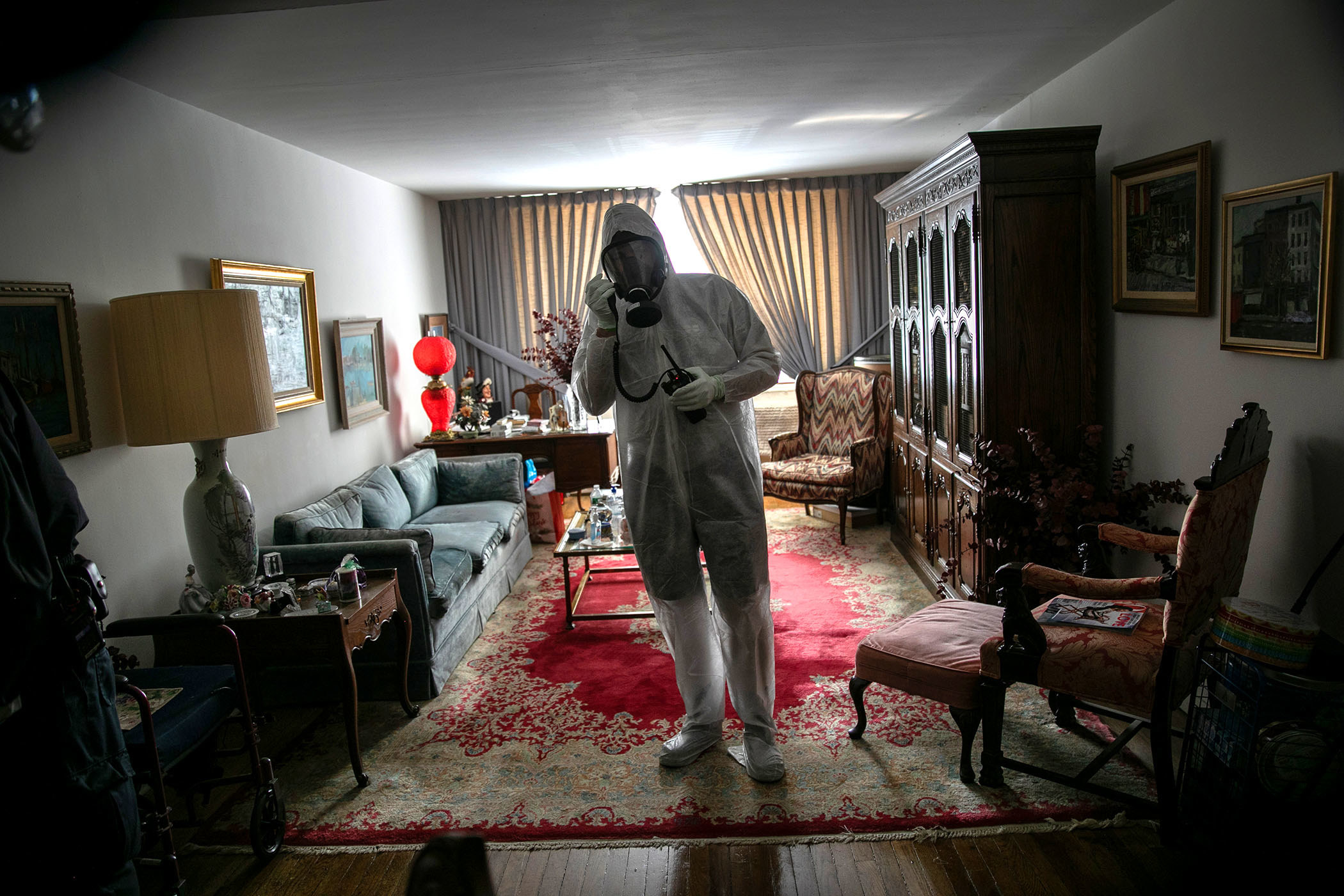 A Yonkers firefighter wearing personal protective equipment speaks into a radio after responding to a medical call in Yonkers, New York, April 6. 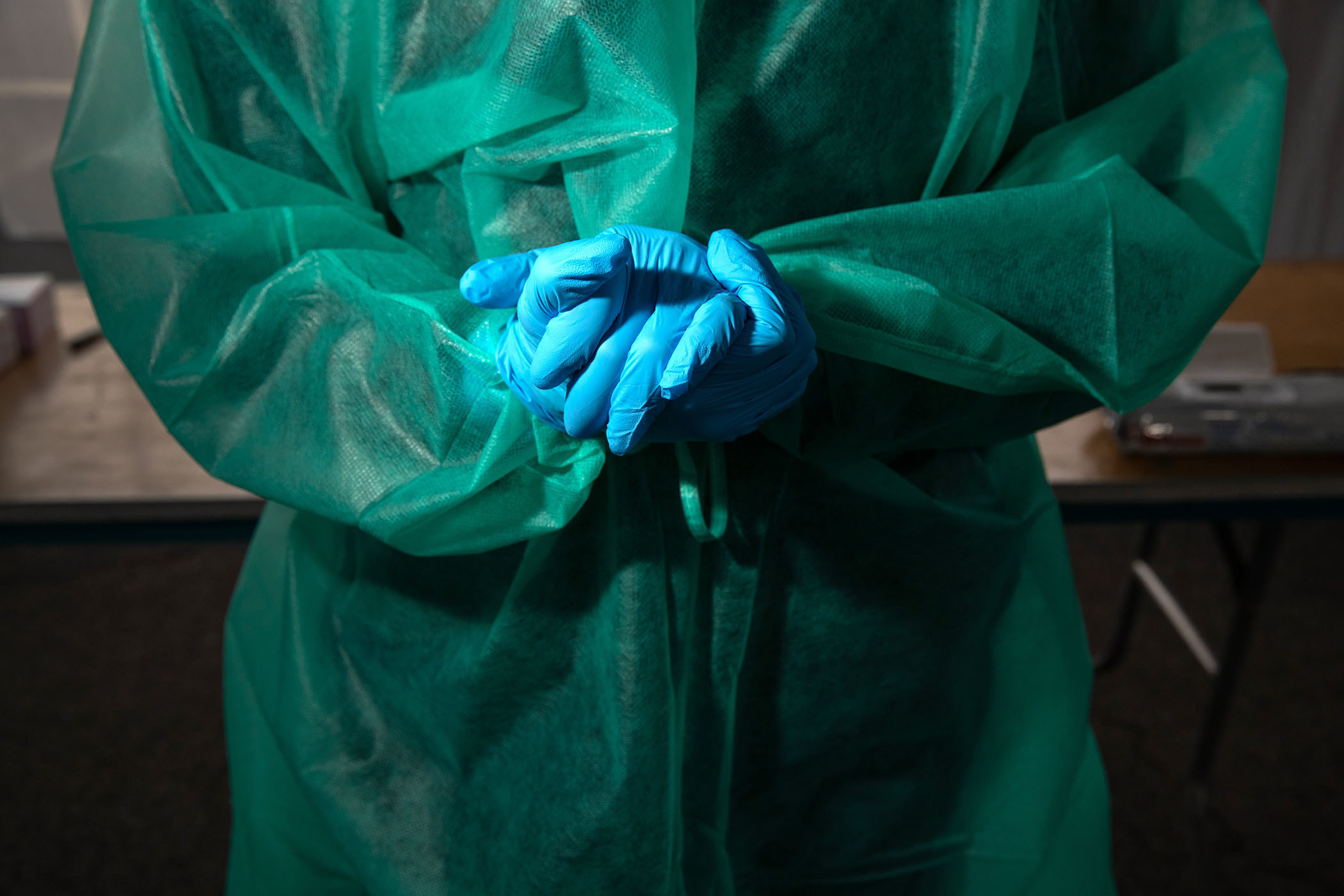 A doctor from SOMOS Community Care prepares to test a patient at a drive-through testing center for COVID-19 at Lehman College in the Bronx, New York City, on March 28. The center, opened March 23 at Lehman College, can test up to 500 people per day for the coronavirus. 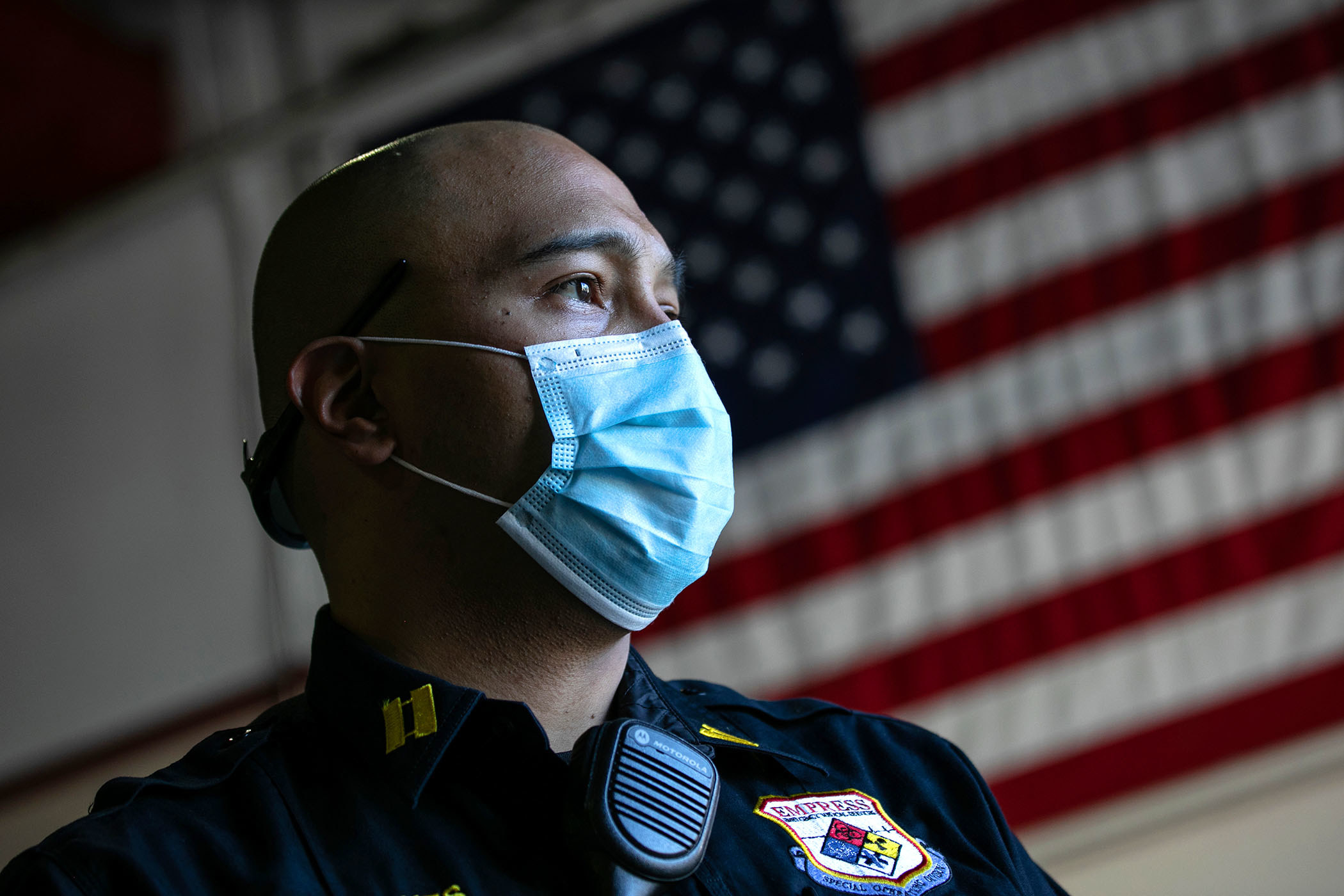 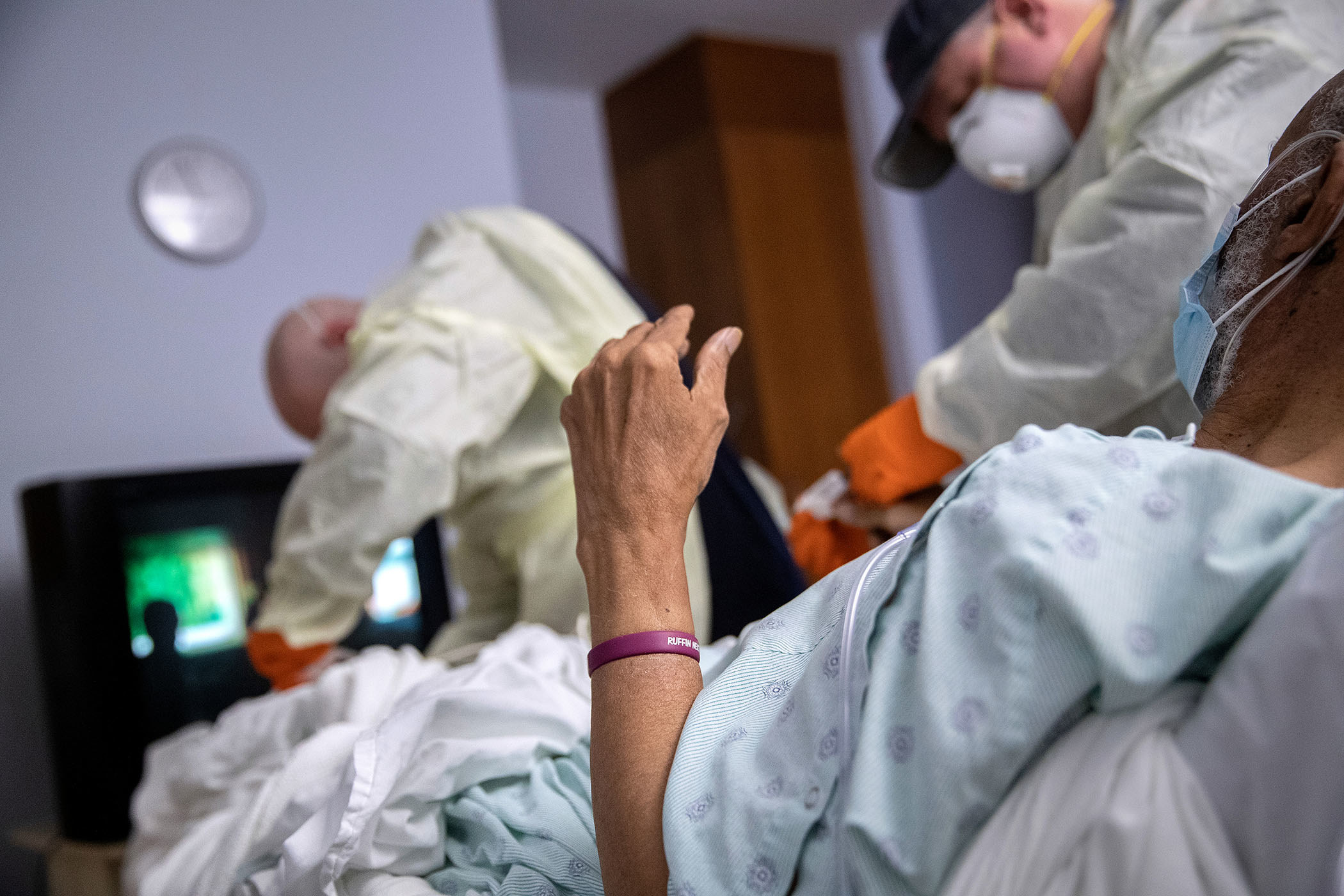 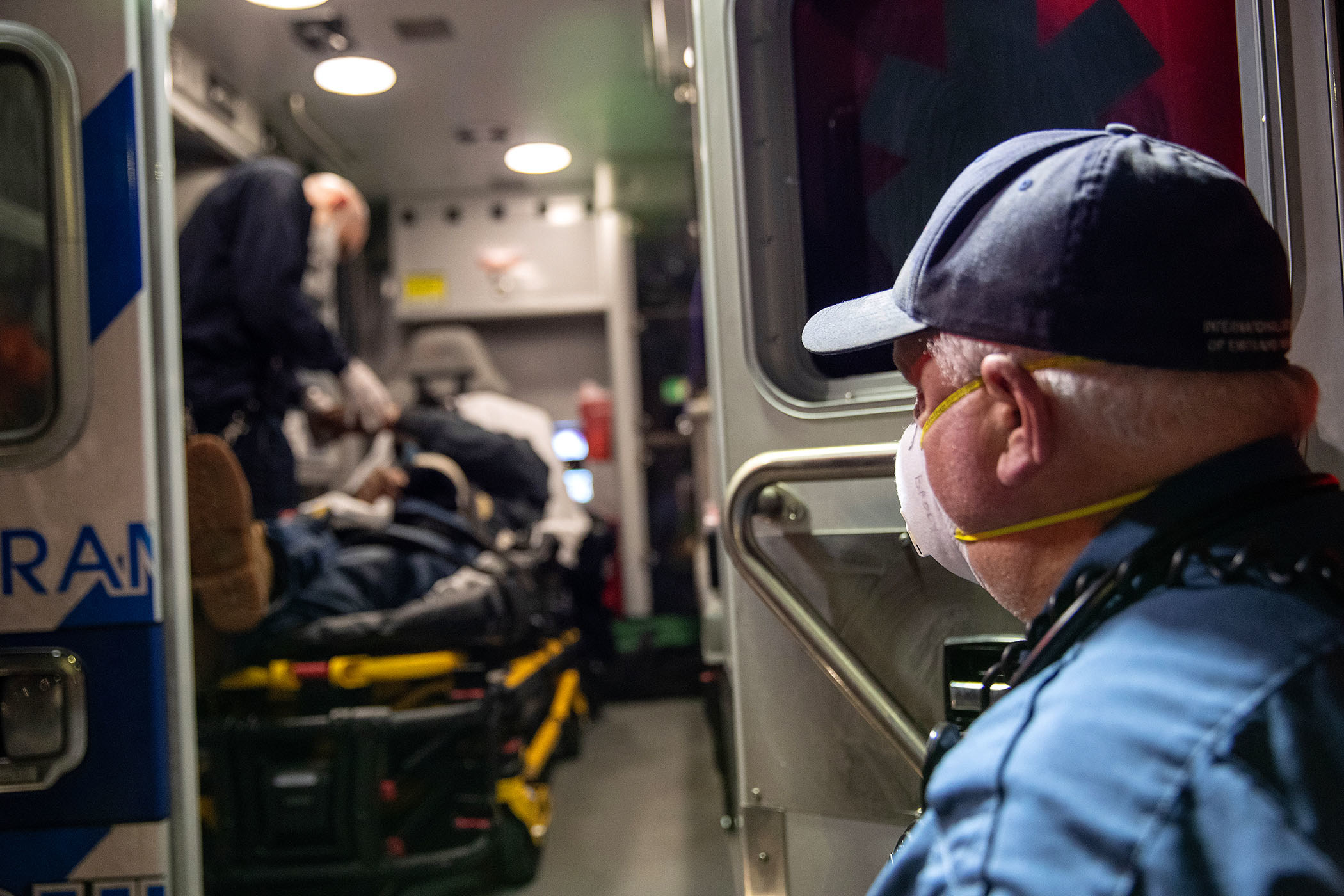 Paramedic David Brody with Stamford EMS watches as a colleague treats a patient before transport to Stamford Hospital in Stamford, Connecticut, April 2. 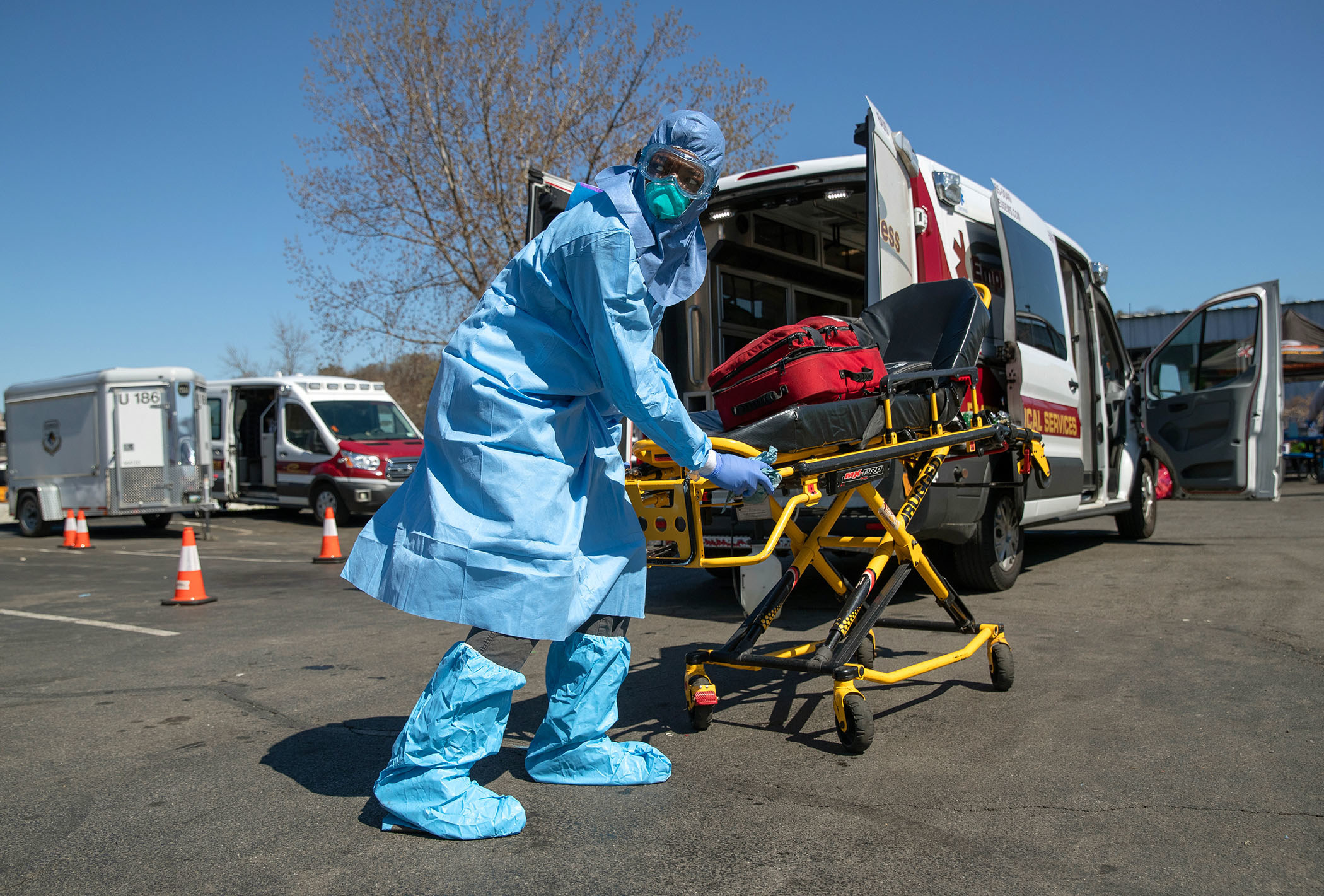 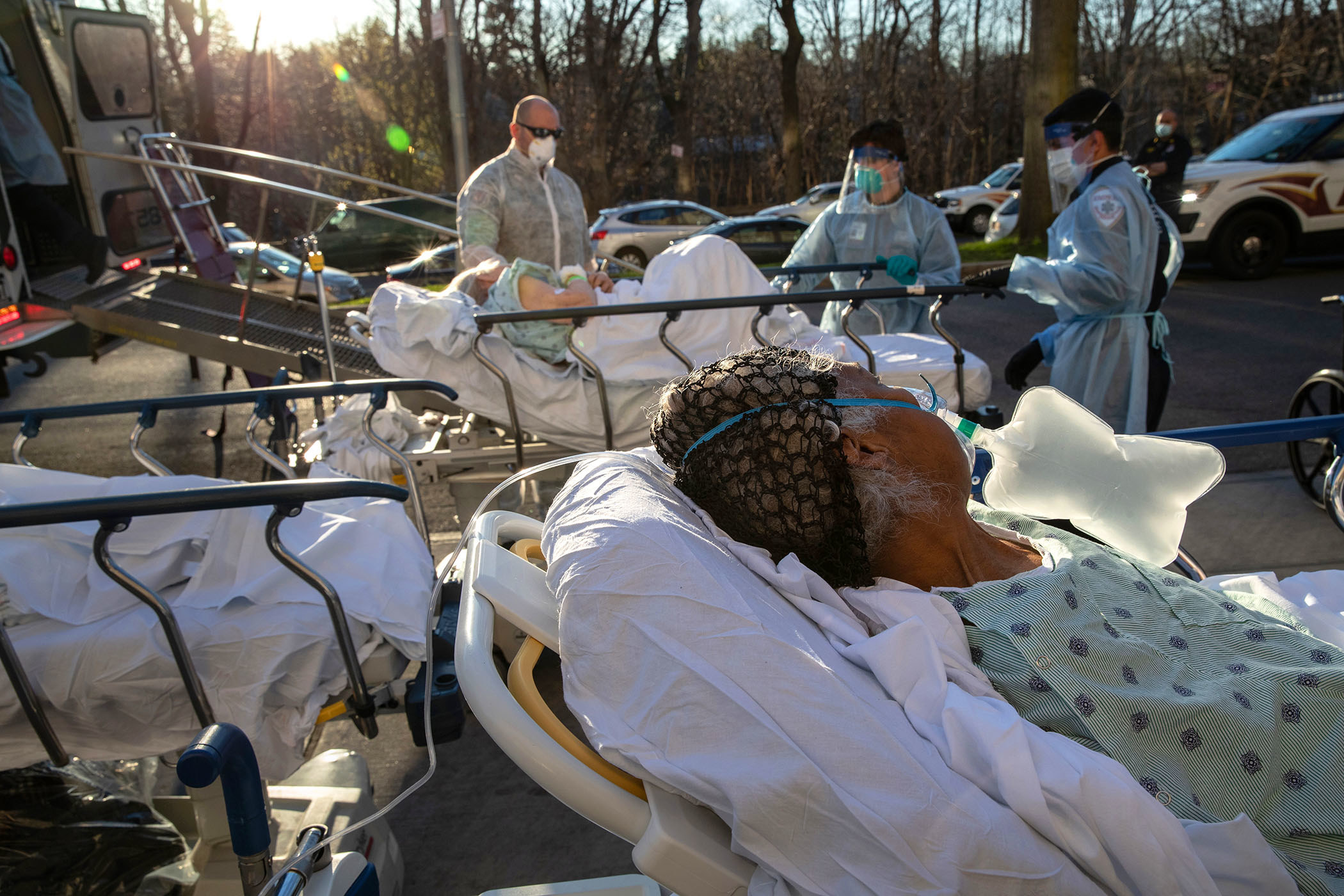 COVID-19 patients arrive at the Wakefield campus of the Montefiore Medical Center in the Bronx borough of New York City, April 6. The patient transfers are designed to help overwhelmed hospitals even out case loads in Westchester County and New York City at the epicenter of the US coronavirus pandemic. 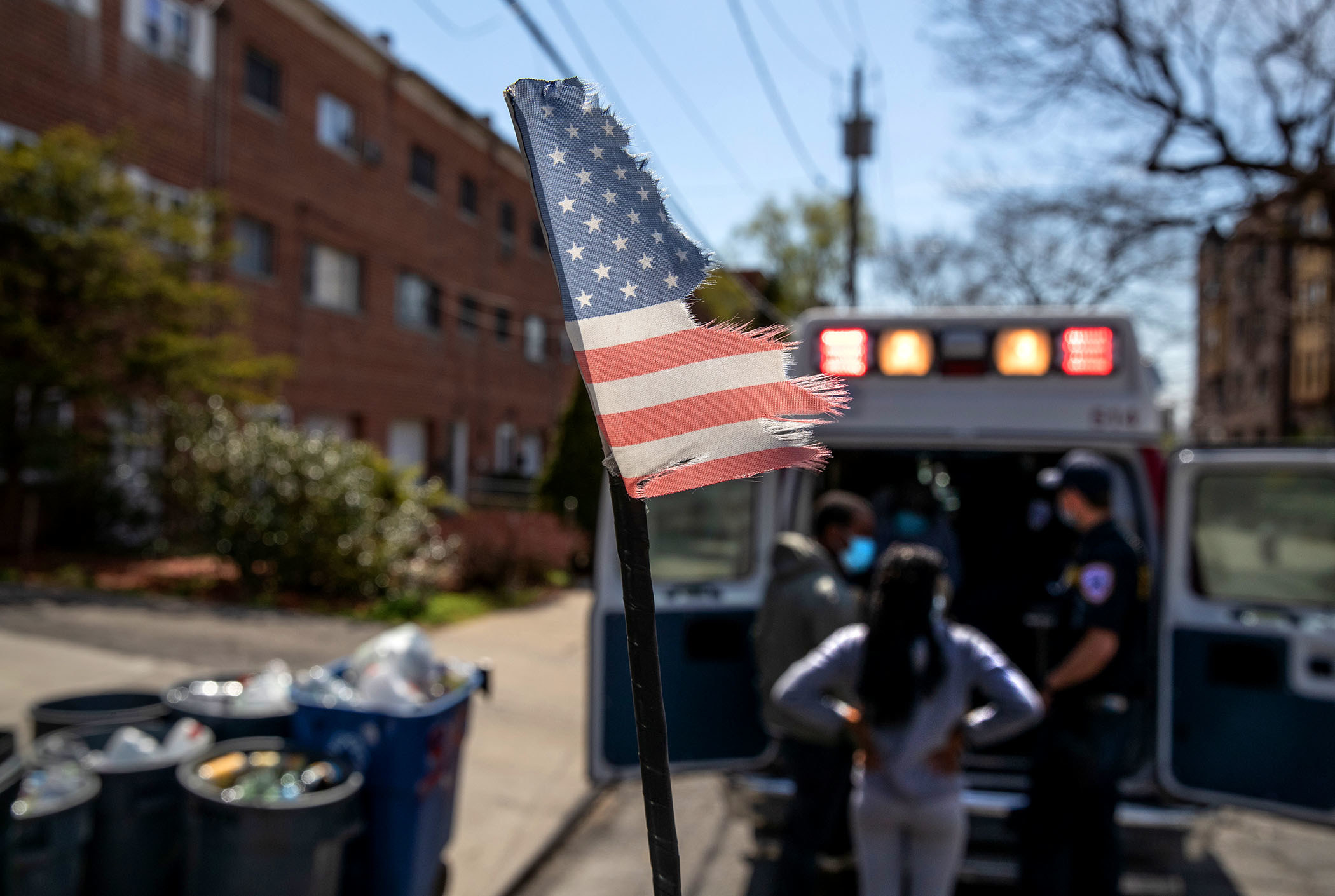