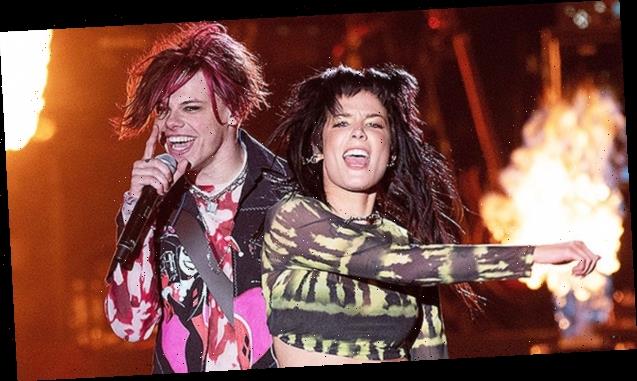 Yungblud took to Instagram donning a strikingly similar ensemble to one his supposed ex, Halsey, wore when the pair went on a date in West Hollywood back in January.

It looks like Halsey‘s, 25, rumored old flame Yungblud, 22, could be trolling her. The British rocker, born Dominic Richard Harrison, took to his Instagram on Oct. 17 wearing a strikingly similar outfit to one worn by Halsey just months ago. “Your biggest fookin superpower is to be the most original, authentic version of who you are,” Yungblud captioned the pic, featuring the singer standing in front of a brick wall wearing a leopard print skirt, jacket, hat and black top, WHICH YOU CAN SEE HERE. “Whatever that version may be. the underrated youth ep is out tonight at midnight. i can’t wait for you to hear it.”

It was an interesting way for Yungblud to announce new music, as the look definitely called back to a different time in the 22-year-old’s life. The outfit looked so similar to one worn by Halsey when the former couple were getting cozy in West Hollywood on Jan. 31, 2019. The Grammy-nominated singer and her rocker were totally smitten with each other, at the time, after getting dinner at Jones Pizza. Pics of the pair featured Halsey donning a sexy thigh-grazing leopard print coat that bears a major resemblance to the pic from Yungblud’s recent Instagram.

Halsey and Yungblud appeared to be going strong, as the “Without Me” singer gushed about her man in August. “Darling dom. everyone who has met you in this life, for any amount of time at all, will be changed forever because of it,” she shared in her birthday message to Yungblud, whose birthday was on Aug. 5. “For some, in small ways they won’t even realize. for others, in a life changing wave. and every single one of them will be better, from having crossed your path for even a second. you leave an irrevocable shine on every soul you come in contact with. mine is gleaming. 💡 happy birthday, I love you.”

Neither of the musicians have confirmed their rumored split. But fans already think that Halsey is moving on. The singer was spotted holding hands with American Horror Story actor, Evan Peters, 32, on what appeared to be a date to Six Flags Magic Mountain in Valencia, California on Sept. 21. Yungblud seemingly reacted to the rumors by yelling “Somebody take me to Disneyland” while performing a concert in Florida. It’s more than likely a stretch, but some fans took it as a clap back to Halsey and Evan’s rumored date. Now, fans have quite a lot to muddle through with the rocker’s latest Instagram.