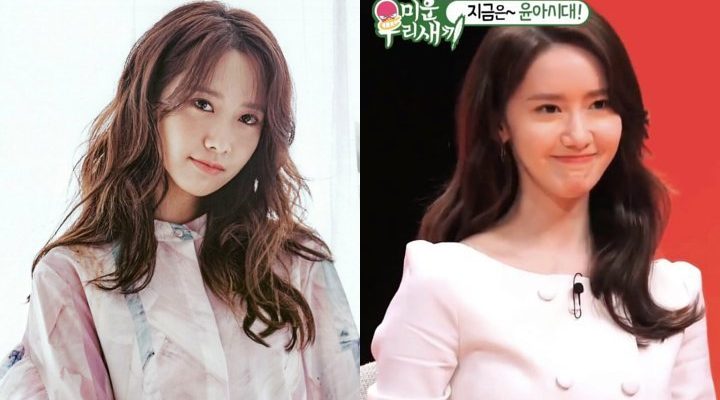 AceShowbiz –Yoona is undoubtedly one of the prettiest girl group members in South Korea today, but people can’t stop debating whether her goddess-like look is all natural or the works of plastic surgeons. Following her recent appearance on SBS’ show “My Little Old Boy”, new rumors surfaced that she got more procedures to enhance her look.

Some Internet users noticed that the Girls’ Generation member looked weird because “her facial expressions looked unnatural.” They accused the 28-year-old singer of getting fillers on her forehead that made her unable to smile. “I was surprised… she couldn’t even laugh because her muscles weren’t moving,” one commented on Yoona’s look.

“It’s not because of the lighting.. she obviously looks different,” another argued, as someone else added, “Her forehead looked so bad (sad expression) She was already pretty without it… what a shame.” One other similarly said, “I think she got fillers done but her skin is so thin that it made her look unnatural. Her eyes looked sharper too, like she got double eyelid surgery.”

This is not the first time the K-Pop star was accused of going under the knife to look prettier. Comparing her look from her pre-debut days to the more recent ones, some people speculated that she had at least eyelid surgery, a nose job, a jaw reduction surgery and fillers on her forehead.

Someone pointed out, “She only recently seemed to have gotten her forehead and double eyelids done but she already got her nose and jaw done before debut.” Saying that plastic surgeries are common among Korean people, the said Internet user added, “Not that it’s our business, she also never denied it herself either. It’s always her stupid fangirls and fanboys going around lying as if she never got any work done on media play. Plastic surgery is so common these days even among non-celebrities that anyone can tell when something looks different but fangirls are acting like the public is blind.”

Her different look aside, Yoona is still one of the beloved stars in South Korea. During her appearance on “My Little Old Boy”, the mother of H.O.T.‘s Tony An made it obvious that she would love to have “The King in Love” star as her daughter-in-law.

“She’s really so pretty. If only our Tony was younger,” Tony’s mother Lee Ok Jin said on Yoona. “Tony is really kind. Yoona also seems like a nice girl. You two would go well together.” After the “Gee” hitmaker admitted that Tony was her favorite member of H.O.T, Lee Ok Jin continued joking, “It would really be great if you married our Tony, right?”

Kim Jong Kook‘s mother Cho Hye Sun chimed in, “We all have the same thoughts [about Yoona and our own sons.] We just haven’t been able to express it in words.”