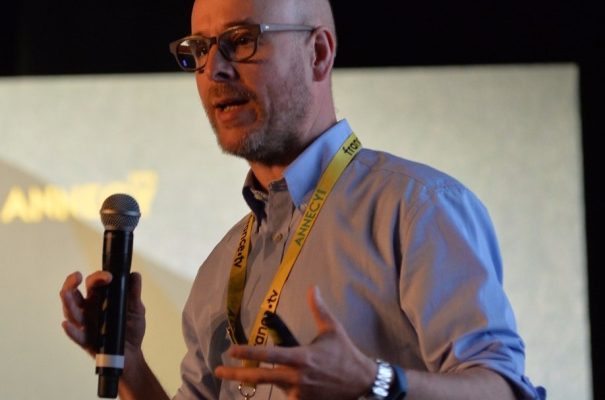 With his latest feature, Buñuel in the Labyrinth of the Turtles, writer/director Salvador Simó dove into a pivotal moment in the life of one of his artistic heroes. Striving to demystify an icon who maintained a shroud of secrecy around himself, Simó opened up a complex character in Luis Buñuel—the Spanish filmmaker behind L’Age d’Or and Un Chien Andalou—examining one of his first directorial efforts focused on the mountainous Spanish region of Las Hurdes. Titled Land Without Bread, the film was made with the intention of putting a human face to the suffering intense poverty brings, though Buñuel’s early filmmaking methods were highly questionable, as Simó’s film reveals.

Though concerned for those around him, Buñuel had no qualms about exploiting the environments around him for his own ends. In the end, though, Labyrinth of the Turtles is no rebuke of the director. For Simó, celebrating the accomplishments of a cinematic master meant also acknowledging his origins, and the inconsistencies that made him human. In making the film, the director hopes to invite new generations of viewers into the world of Buñuel. “I hope that they are interested in the character and want to know more about him, because he was a great director and a great artist,” he says. “So if I just achieve that—that people get a little bit more curious about him—it’s a huge success.”

What was your goal with Buñuel?

With this film, we wanted to present the character that he was to young people that didn’t have the chance to live his films, as they were released at the time. I think people will be surprised, by reviewing his films, how much they tell, nowadays, about real life.

What was important to you in terms of characterization? As we see in the film, Buñuel was a brilliant artist, but he could also be exploitative in his art, with the animals and people he was portraying.

Luis was a character that was full of contradictions, as is everyone else. Who is not? But he had a peculiar life. He was a genius, so we were trying to let the audience know a little bit more about the character, about his contradictions, why he acted in a certain way. To understand why he acted in this way, what he was looking for when he was doing these things. Most of his actions, we are surprised [at], but that was the 1930s. It was another time, another way of thinking. The role of the father was different; everything was different. So, we couldn’t make the film without [acknowledging] that it’s what made Buñuel at that time. If Buñel had grown up these days, he would be someone else.

The film’s animation is intercut with actual footage from Buñuel’s documentary. Did you need to contact the filmmaker’s estate to ask for permission?

We knew that we wanted to do it, and we asked for the rights. We talked with the family—they were the ones that were holding the rights—and they gave us the OK from the beginning. It was very easy. We were talking with Juan Luis Buñuel, one of his sons, since the beginning, and he agreed with what we were doing, and was helping us a lot with stories and things about his father. We knew that we had to do it this way because this film is done with all the respect and love for the character, for Luis. So we got the rights, and then we wanted to give this feeling of reality, this feeling that what we are telling, overall, the situation of these people, and some of the things that he did. They were real. So, it was not some VFX or animation that we invented. No, no. That is actual footage of the film, shot in 1932. So, when he shot the goat, you can see in the documentary the smoke of the gun, and then you can see in the shots that were not included in the film that it is him that is shooting it. With the roosters, they take the head off. All these kinds of things are real, and it was what he was trying to do. He was trying to make a recreation of reality, so in some ways, it gives some dimensions to the story that we’re telling. It’s real; it happened.

What was your thinking, in terms of how you would visually represent Buñuel and his world, both in France and in Spain?

The journey of Las Hurdes was not just done by Luis. It’s done by these four characters, and they find the reality there. These realities are changing them, and in some ways, they’re affecting them deeply. So, we had to see that reality. If we want to understand the arc of a character and why these things are changing them, we need to see them. There are some shots where we don’t see them, but it’s done on purpose, so you can go see it on the documentary. The audience needs to understand why these characters are changing, and [what better] way to do it than with what actually happened?

Was your visual style inspired by any particular artist or work of art, from Buñuel or anyone else?

We always put the story at the top. Technically, we didn’t want to do a cartoony film with all this stuff. Stories, they sometimes require a bit of animation, and with this one, we wanted to find an animation that gets married with the story really nicely. The story is a rough story—it’s tough, it’s uncomfortable and that’s a little bit what we wanted. You see that the lines are not soft, they are broken lines; the animation is quite stylized, and the animation was even done on 3’s. Sometimes on 4’s, sometimes on 2’s, but basically on 3’s, which makes the movement a little bit less soft, and that somehow gives some discomfort to the audience. It’s one of the pieces that makes this feeling.

Could you provide historical context for the moment when we see Buñuel as a child, and he’s involved with a cultural ritual involving drumming? When he’s drumming and droplets of blood fall down onto the instrument from his hands, it’s quite an evocative image.

Calanda is where he was born, and once a year, they make this big drum thing that’s always something that’s been linked to Bunuel, because he loved that. Even his son made a documentary about that; it’s something very deeply [embedded] in that village. This sequence is a little bit of a metaphor of his journey, which was difficult. He wanted to go forward but he had many steps. Sometimes he would fall, and then he’d get up and keep going. That’s until he arrived to the end and became what he becomes later, and that was a great director. So, it’s a little bit of a metaphor for this journey.

The film presents a number of nightmarish visions experienced by Buñuel. Was this aspect of his life experience well documented?

Some of them are fiction. Some of them are based on small things that we got here and there, and then we kind of made up [sequences], trying to work for the story and for the audience so they can understand what were possibly the conflicts that he had. There’s a lot written about Buñuel, but there’s not so much written overall about what happened in Las Hurdes. There’s almost nothing, and also, about his personal feelings. In one of his autobiographies, he was saying at the beginning, “Well, you know this biography might be true, but it might not.” So, you can see he’s already telling you that he’s going to make up a lot of things. But that was Luis Buñuel at that time. He was a character, he was joking all the time. You never knew if he was talking seriously or if he was not. Talking and reading about people who worked with him, it makes you understand that he was a really deep character. A really nice person, really sensible, but he was very profound in his thinking.

What were the biggest challenges in bringing the film to fruition?

There’s always the challenge of the budget; we were talking about a challenging budget. Probably the biggest challenge, to be honest, was that all the people who worked on this film wanted to do a great thing, great work—and that’s the challenge we put on ourselves. That was the biggest challenge. In another way, it was magical because all the people that came to work on this put their heart in the film. They loved the work, and I think the film became what it is because of the team that worked on it. They just left in it all their soul, and all their sweat, and that cannot be paid by money. It’s just something that for me, I will never forget.