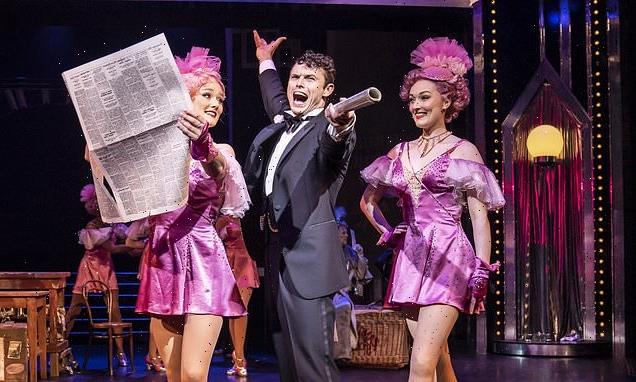 Guaranteed to put pep in your step! PATRICK MARMION reviews Crazy For You

Crazy For You (Festival Theatre, Chichester)

Verdict: Crazy for this!

Much Ado About Nothing (Lyttelton, National Theatre, London)

Verdict: Not much about ado

When shows are as good as this staging of Crazy For You, they’re little short of miraculous. Written by Ken Ludwig in 1992, based on show tunes by George and Ira Gershwin, the musical has been given a stunning revival by U.S. director Susan Stroman — who choreographed the original. Thirty years later, lightning has struck for her again.

With an exuberant company led by two fine young singers and dancers — Charlie Stemp and Carly Anderson — the story is about New York rich kid, Bobby, sent to close down a loss-making theatre in the American mid-West . . . only to fall head over heels for Polly, the straight-talking country girl who runs the tumbledown venue.

Yes, the show is blessed with fabulous songs including Someone To Watch Over Me, I Got Rhythm and Nice Work If You Can Get It.

But it’s Stroman’s choreography that blows the roof off and wins standing ovations at the end of each half. 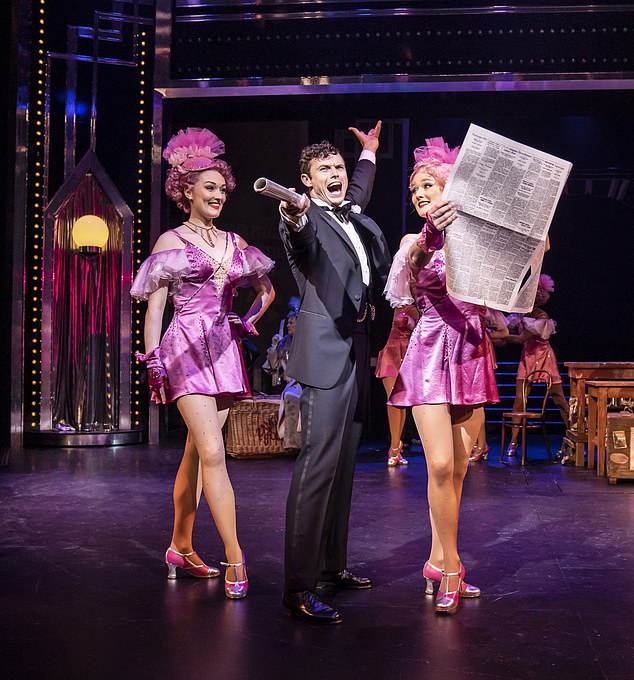 When shows are as good as this staging of Crazy For You (pictured), they’re little short of miraculous

Her dance routines are extravaganzas that escalate into multiple climaxes: leggy chorus girls revolving like spinning tops, cued by farmhands who play everything from the banjo to saw and washboards.

The idea of turning the girls into cellos fitted with ropes for strings plucked by the cowboys — or pendulums, with the girls standing on the boys’ pickaxes — was divine inspiration.

With more taps than Thames Water, it’s the clatter of the company’s hooves that hits you in the chest. This is showbiz razzmatazz firmly grounded in boy-girl stereotypes that suspend all distinction between fantasy and reality. Anderson’s Polly probably has the best tunes and she secures them with a voice full of summer fruits — while being flung about the stage by Stemp in a whole range of moves from ballroom blitz to barn-side swing. Stemp (who played Bert the Chimney Sweep in Mary Poppins pre-Covid) leaps into shoulder high splits and can hold a tune, too. 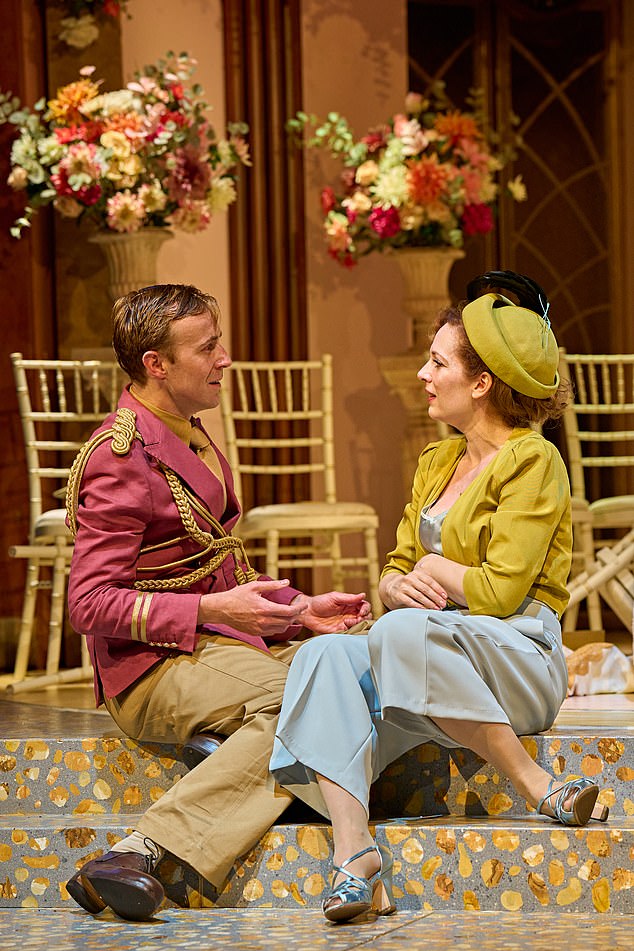 But here he’ll be remembered best for combining the physical comedy of Norman Wisdom and the dancefloor artistry of Fred Astaire. Some of the funniest routines come courtesy of physical comedy past-master Tom Edden, who, as the show’s zany impresario, Bela Zangler, joins Bobby in a Marx Brothers mirroring routine.

With a kaleidoscopic turnover of stunning frocks, the backstage dressers alone deserve a gong. And Beowulf Boritt’s set is cunningly fitted with revolving flats to flip easily between New York and Nevada.

Honestly, it doesn’t get any better than this, and if this show doesn’t get a West End transfer, it will be a crime against theatre.

I wasn’t so crazy for the Lyttelton’s Much Ado About Nothing, which sees Shakespeare’s comedy translated to the Hotel Messina in 1930s Sicily, in a show starring Katherine Parkinson and John Heffernan as warring lovebirds Beatrice and Benedick.

There seemed little love lost between the actors in Simon Godwin’s lightweight production, which doesn’t really engage with the play’s dark side.

Anna Fleischle’s Art Deco setting of the hotel is easy on the eye, in shades of pastel pinks and matching costumes. 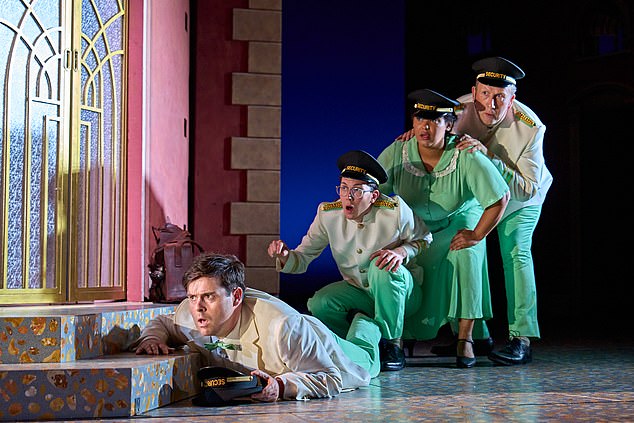 I wasn’t so crazy for the Lyttelton’s Much Ado About Nothing, which sees Shakespeare’s comedy translated to the Hotel Messina in 1930s Sicily, in a show starring Katherine Parkinson and John Heffernan as warring lovebirds Beatrice and Benedick 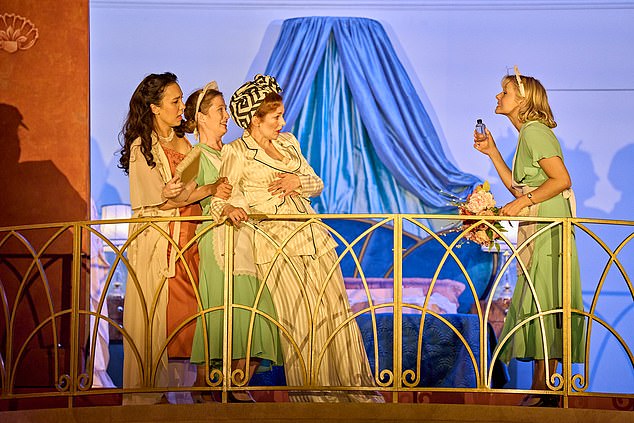 Anna Fleischle’s Art Deco setting of the hotel is easy on the eye, in shades of pastel pinks and matching costumes.

But it would be better suited to Hercule Poirot, who might have asked why Benedick’s friend Claudio (Eben Figueiredo) is played with the anachronistic accent of a 21st-century urban roadman normally seen on a skateboard.

More seriously, the whole show on Press night this week was marred by noises off, the sight of cast or technicians moving around backstage and the hotel lobby doors jamming.

All part of the fun in church hall am-dram, perhaps — but not at the National Theatre.

Their paths cross when Alice is taken to A&E by Anna’s boyfriend Dan, where she meets Larry and, following this long, contrived set-up, they swap each other as sexual partners, much as the rest of us change our underwear.

And yet, for all the talk of love and intimacy, the play is an increasingly soulless experience, with the characters showing little sign of love or affection for themselves, or one another. 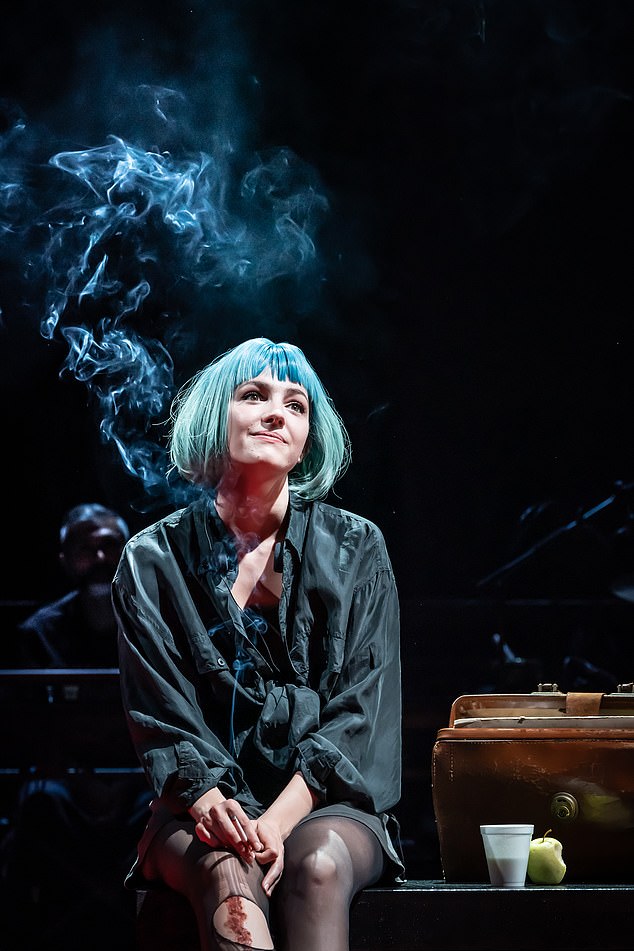 Ella Hunt delivers a magnetic performance as the dreamy stripper, but Nina Toussaint-White can do little with her role as the emotionally sterile photographer — and we learn next to nothing about either woman

Constantly pestering the women for sex, doctor Larry claims men see women as ‘territory’ and so reveals the play as a more than faintly misogynistic tract. Nor is that helped by the psychologically damaged stripper Alice performing provocative lap dance routines to bear out Marber’s conjectures about all men being sexual troglodytes.

Ella Hunt delivers a magnetic performance as the dreamy stripper, but Nina Toussaint-White can do little with her role as the emotionally sterile photographer — and we learn next to nothing about either woman.

At least Sam Troughton has some unreconstructed fun as the caveman physician; but Jack Farthing’s writer is an improbably monosyllabic lothario who, in the end, turns violent.

Clare Lizzimore’s production does at least look slick, presenting the play on Soutra Gilmour’s dark, minimalist set as a kind of smoky jazz quartet. Artfully lit musicians at the back of the stage play selections from Portishead and Bjork between scenes, and there’s a particularly haunting clarinet solo late on performed by Arun Ghosh. But making the show look hip and cool doesn’t get us emotionally involved. It just feels like a loveless relic of Nineties laddism.