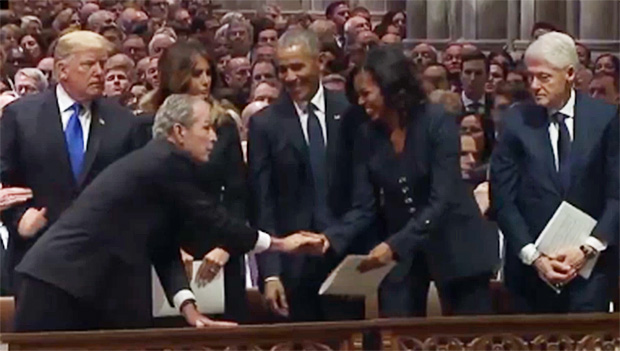 George W. Bush created a small moment of happiness during a solemn day when he snuck a piece of candy to Michelle Obama at his father’s funeral. Watch the funny moment unfold!

Talk about friendship goals. No one would have ever guessed that George W. Bush and Michelle Obama would become best friends, but here we are. The former president made sure to stop by the pew where other presidents and first ladies were sitting for his father’s funeral specifically to sneak Obama a piece of candy. They may all be in mourning for George H.W. Bush, but his son needed to make sure the former first lady had her mint!

Twitter noticed the touching moment immediately, as Bush stopped walking with the funeral procession to duck over to her — and over President Donald Trump, First Lady Melania Trump, and former president Barack Obama! She smiled wide while accepting the much-appreciated token from her pal. In typical functions where former presidents and first ladies are present, protocol is for Bush to sit next to Mrs. Obama. At his father’s funeral, he, of course, instead sat with the rest of his family.

The moment is notable because he did the same thing at the late senator John McCain’s funeral in August. During the long ceremony, he got a mint out of wife Laura Bush‘s purse and passed it over to Obama. And they did the handoff on the sly, like kids trying to pass notes without getting noticed in class. Watch both moments, from Bush and McCain’s funerals, below:

The moment between Bush and Obama came shortly before he delivered a heartbreaking eulogy, during which he praised his father for being perfect, “but not too perfect,” living life to the fullest, and setting an example for him to be a husband, father, and grandfather. He held it together until the very end, when he teared up and said he knew his dad was with his mom and sister in heaven.