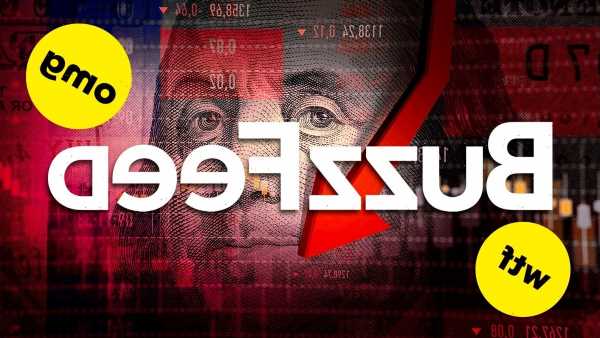 Going from viral content to commerce is not an easy shift

After just three days as the first publicly traded digital media company, BuzzFeed is already showing signs of strain in its attempt to redefine itself as a brand that stands for more than cat memes and trivia quizzes.

Since BuzzFeed began trading publicly on Monday after merging with the special purpose acquisition company 890 Fifth Avenue Partners, shares have slipped 30% from $10.95 to $7.68 at market close on Wednesday. (A representative for BuzzFeed told TheWrap the company is “not going to focus on day-to-day fluctuations in stock price.”)

The biggest challenge for BuzzFeed, analysts say, is CEO Jonah Peretti’s attempt to reposition the company not as a content-focused media outlet but more as an e-commerce player. In a pitch deck last June, the company set a $1.5 billion valuation based on a projected profit of $117 million by the end of 2022 that will mostly come from e-commerce — commission on sales through content, events, clothing and other merchandising through its acquired brands and companies.

But skeptics were quick to note that the valuation was calculated by multiplying the profit by 13 — a move more in line with a tech company, but way more aggressive for a 15-year-old media outlet whose primary focus and revenues have so far come from advertising.

“Now they’re trying to go to e-commerce and digital marketing, and they can because they’ve generated clout around their name,” Shama Hyder, CEO of B2B marketing and PR firm Zen Media. “As far as how much staying power BuzzFeed will have as a public company, it’s TBD. If nothing else, this is a great PR move because they’re in the spotlight.”

Based on its December investor presentation, BuzzFeed is banking on e-commerce growth accelerated by COVID-19 as “the modern consumer discovers and buys new things.” Its commerce revenue will be driven by affiliate commission earned on direct sales transactions through editorial content, as well as royalties on licensing intellectual property and live events, according to the company. As part of acquiring Complex Networks, the company also adds properties, including a youth convention ComplexCon, online retailer Complex Shop, the food brand Hot Ones and sneaker brand Sole Collector.

At the time of the deal’s closing, BuzzFeed’s implied valuation was $1.5 billion. With the funding from the merger, the company also acquired Complex Networks for $300 million — $200 million in cash and $100 million of equity.

But BuzzFeed’s commerce revenue this year is already expected to fall short of the projected growth of 67% to $95 million, as outlined in its investor presentation in June. While commerce revenue hit $57 million in 2020, the total hit only $50 million by the end of the third quarter — meaning the company would have to nearly double commerce revenue from the first three quarters combined to meet its own projections. (Ad revenue led at $177 million through the first three quarters, while content accounting hit $109 million.)

But the gap between June’s rosy projections and the reality shows the company is already “overstating and underperforming on this initiative,” Paul Roberts, founder and CEO of digital advertising firm Kubient, said.

“Making a business strategy change when you’re a private company has its own struggles, but with the public investors and analysts’ eyes on them, as well, it will (prove even) more challenging,” Roberts said. “When you are a private company, you can figure these things out over time, but when making the move to being publicly traded, the executive team will have to answer to the public every 90 days, which will bring an entirely new set of circumstances and concerns.” 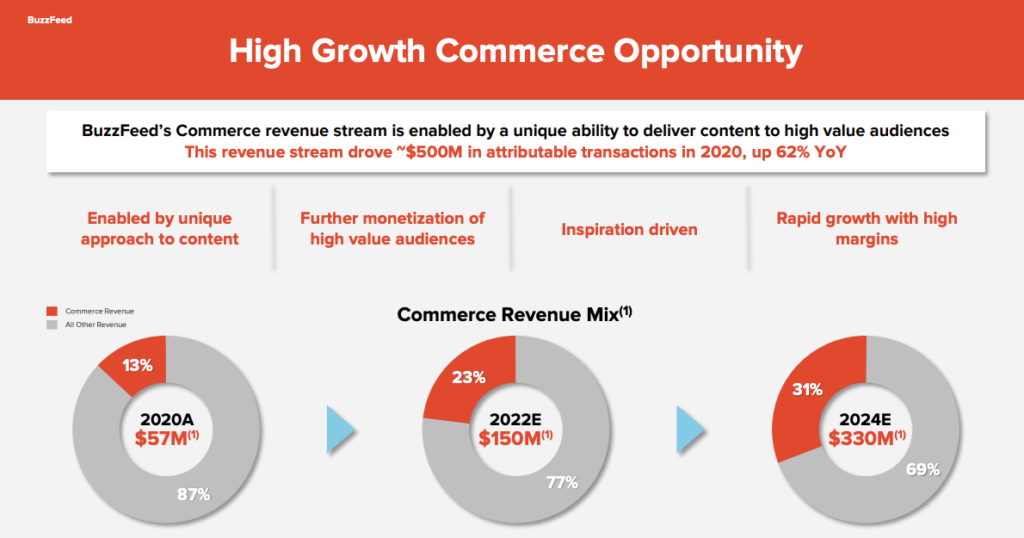 BuzzFeed had projected that its commerce revenue would reach $150 million in 2022 and $330 million in 2024 — attributing the majority of its overall growth to commerce rather than content and advertising that have been the key focus of the brand to date. Last year, the company generated $321 million in annual revenue and $31 million in adjusted earnings, mostly coming from e-commerce — a pandemic boost that most digital companies observed throughout 2020. The company is projecting to hit $653 million in total revenue next year, but advertising still accounts for more than half of its revenue.

In addition, the current e-commerce market is fraught with obstacles driven by political conflicts and a squeezed supply chain as the pandemic persists. Doron Gerstel, CEO at global ad firm Perion, noted that while BuzzFeed’s e-commerce revenue and margins are “solid,” the larger e-commerce space is being hit hard by trade wars and increasing demand for consumer goods in China and much of the world.

“As a public company, BuzzFeed’s percentage of advertising revenue (both third-party display and directly sold) may take a hit, unless it can find a solution to bridge its first party revenue data and user data,” Gerstel said. “BuzzFeed’s audience is large enough to create demand, but is BuzzFeed sophisticated enough to build a logistical moat around its business during the container crisis?”

As the first publicly traded digital media company, many eyes will be watching whether BuzzFeed can live up to its potential. Bustle Media Group, Vox and Vice are some of the media companies that have also considered going public, either via SPAC or acquisition. Some could even be candidates to combine with BuzzFeed down the line. BuzzFeed acquired HuffPost in November 2020. 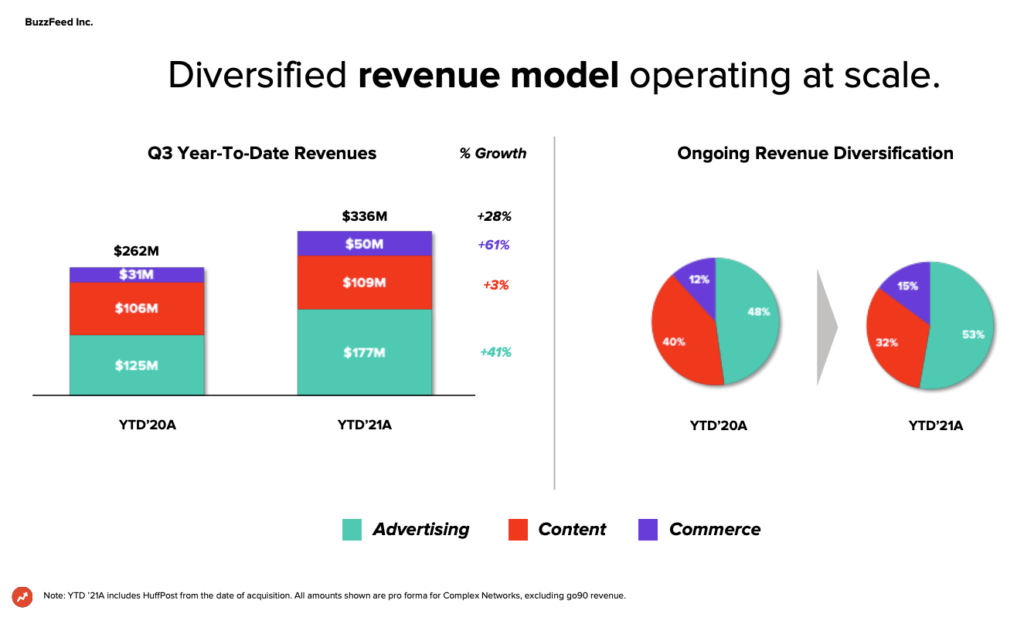 But there have been red flags about BuzzFeed’s prospects as a public company — including in the days leading up to last week’s IPO vote. While BuzzFeed had hoped to raise hundreds of millions through its SPAC merger, the deal brought in just $16 million. About 94% of the $287.5 million that the SPAC raised earlier this year was withdrawn by investors ahead of the merger, according to its securities filing. Investors frequently withdraw their investments from a SPAC, but 94% is an unusually high portion.

And some analysts question the decision to go public via a SPAC at all — as opposed to a more traditional IPO. “If they had gone on a roadshow with a bank, they maybe would have had [more excitement] beforehand,” Seema Shah, senior director of research and analytics at Similarweb, told TheWrap.

SPACs can also be a warning sign to potential investors. In a study that analyzed the performance of SPACs from 2019 to 2020, researchers found that while creators of SPACs did well, their investors often did not. In a SPAC, investors have the option to withdraw from a deal if they don’t like it, thereby redeeming their shares for cash invested plus interest. Researchers have found that the average rate of redemption per deal was 58%, and in more than a third of the SPACs in the study, more than 90% of investors pulled out.

Some of the company’s fundamentals remain strong — including the original BuzzFeed website. From January 2021 to October 2021, traffic to the site’s e-commerce section rose 30% compared to the same time period in 2020, according to Similarweb. BuzzFeed’s advertising traffic rose 51% in that period compared to the same one last year and for its contributors platform, there was a rise of 81%. BuzzFeed said that 741 million hours of content were consumed on its site in 2020, up from 619 million hours in 2019. 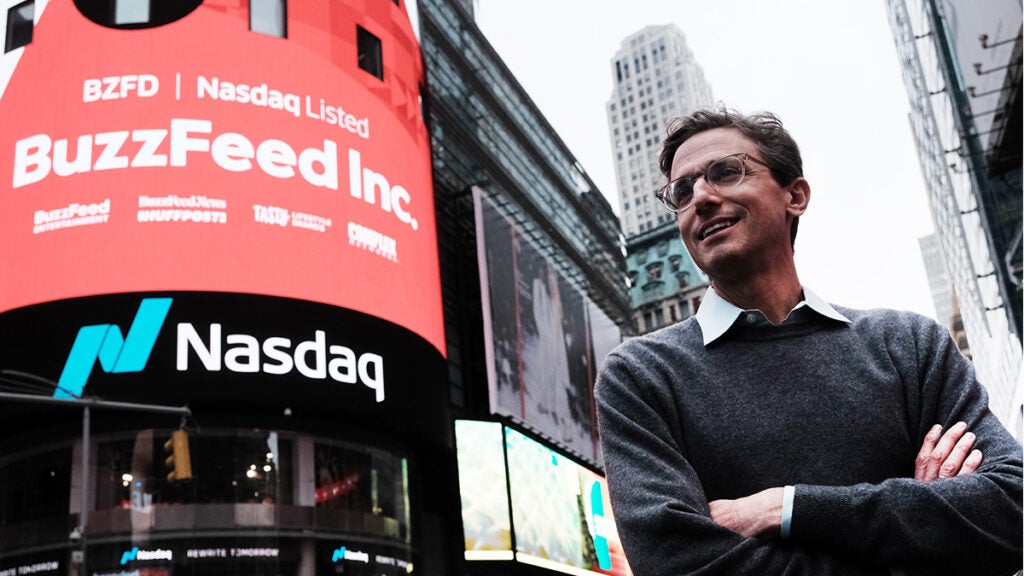 “That is good, and that is there,” Shah said, adding that traffic to BuzzFeed’s advertising peaked in June — the same month the company announced its plans to go public and acquire Complex.

But more troubling data has emerged since then. “They peaked in absolute traffic terms in June, and it’s been declining since,” Shah noted, adding that a staff walkout organized by BuzzFeed’s union last week “doesn’t optically look good” for investors. (The staffers walked out in protest ahead of the shareholder vote on going public, citing a failure by management to come to bargaining agreements on pay and other labor issues.)

In addition, BuzzFeed’s appeal to younger audiences may be waning, as its original youth audiences age and younger Gen Z consumers turn to newer social apps like TikTok for media. The landscape will prove even more challenging as ad revenue continues to get gobbled up mostly by big tech firms like Facebook and Google. The BuzzFeed audience is 32% millennials and Gen Z, while Complex touts itself as having wide reach for men ages 18 to 24.

Gen Z users increasingly shop through social media, said Quynh Mai, CEO of digital marketing firm Moving Image and Content. “If the lifestyle and fashion digital publications, like Refinery29 and Vice, have struggled to grow with e-commerce, how can a news site think it can?” Mai said. “Today, consumers and primarily Gen Z consume most of their media from TikTok and Twitter, so right there, the connection to the consumer is severed. Without that deep, daily connection to the consumer, retail growth is impossible.”

Lindsey Ellefson contributed to this report.