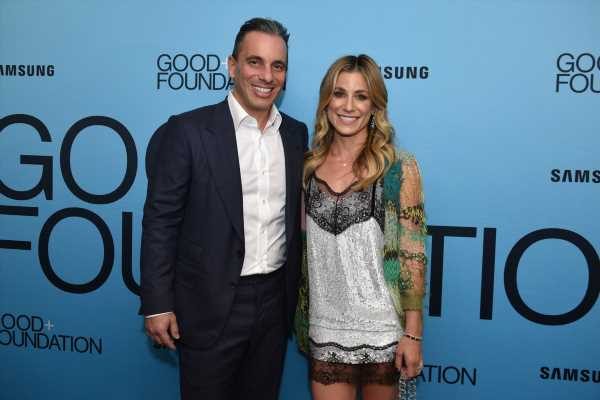 If you’ve ever seen Sebastian Maniscalco do standup, then you know that the comedian and host for the forthcoming 2019 Video Music Awards loves nothing more than to complain. In his latest Netflix special, Stay Hungry, he airs his grievances about everything from car repairs to gym intimidation, and though he also loves to complain about his wife (especially about the differences in their Italian and Jewish upbringings), something tells me that he doesn’t really mean any of the things he says in regards to her.

But who is Sebastian Maniscalo’s wife? As well as being a saint for putting up with all of Maniscalco’s gibes, Lana Gomez is an accomplished painter and sculptor who studied art at the University of Tennessee before moving to Los Angeles to paint professionally. Her work has been on display in several art galleries and featured in publications like House Beautiful, InStyle, and The New Yorker. From what I’ve gathered, she’s far hipper than her husband who — as he joked in his VMA promo video — needs to brush up on his pop culture a bit before he takes to the stage on Aug. 26. Hopefully Gomez is able to explain to him that Cardi B is neither a spice nor a supplement.

As well as being a total knockout, you might have noticed that Gomez, who appears in the promo video, is pretty darn pregnant. On June 15, right around the time it was announced that Maniscalco would be hosting the 2019 VMAs, Gomez gave birth to Caruso Jack, the couple’s second child and first son. Their daughter, Serafina Simone, was born in May 2017, and the family of four resides in a gorgeous Spanish-modern home in West Hollywood, which Gomez has used her artistic eye to transform into a masterpiece.

As Gomez explained to Vogue Australia, her style is “unexpected," as well as “colorful and whimsical" and "playful but sophisticated." After buying the home in 2014, Gomez teamed up with interior designer Kelly Wearstler to give the interior of her home a total overhaul. This wasn’t the first time these two have worked together, however. Gomez first attracted Weastler’s attention back in 2008 after Gomez’s big debut at Judith Liegeois Designs. The two have collaborated on several projects , including a mural that Gomez created for Wearstler’s design studio. That mural was then featured in the designer’s 2009 book, Hue, and the exposure opened the door for even more projects, including sculptures.

Another notable project of Gomez’s includes one of the original 10-foot guitar sculptures in Gibson GuitarTown, a public art project found on Sunset Boulevard in West Hollywood. Her work has been displayed in the famous Greystone Mansion in Beverly Hills, as well as in office buildings, private residences, and outdoor venues.

On her website, Gomez explains that her work is oftentimes a reflection of her own life. "I believe everyone possesses a creative flow that allows them to communicate in their own unique way; painting is how I express this notion," she says. "When I paint, I allow spontaneity to drive my creative process. My work reflects the lens through which I see the world — whether in color, shape or form. Each of my paintings pays homage to a remarkable nostalgic moment in my own life." Apparently, life is pretty colorful when you’re married to a comedian.

As well as adorable pics of her daughter (and now her new son), Gomez uses her Instagram page to share new projects and works of art, which utilize watercolors and acrylics. They’re totally trippy and lovely, but after looking up the price of her pieces (for example, her 6′ by 8′ piece from 2016 entitled "Cheers to the Freakin’ Weekend" is priced at a whopping $28,000), I think it’s going to be a while before I can afford my own.