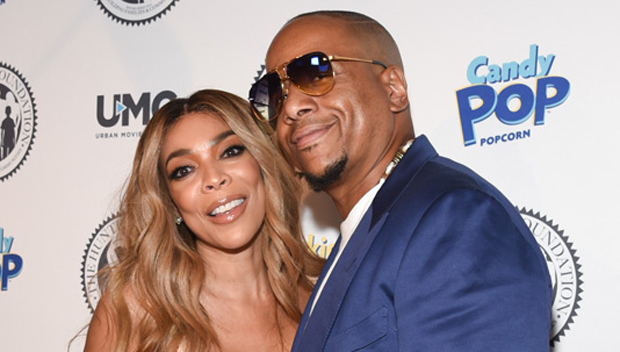 Wendy Williams’ husband Kevin Hunter is fully supportive of her as she’s living in a sober house. He said they’re ‘doing well’ as a family and focusing on the talk show host’s well being moving forward.

Wendy Williams stunned viewers when at the end of her March 19 show, she revealed that she’s been living in a sober house away from her family while dealing with addiction issues. At the time she said the only two people in her life who knew about her struggle were her husband Kevin Hunter and their 19-year-old son Kevin Jr. Now the 46-year-old TV producer is speaking out for the first time about how his wife of nearly 22 years is doing. “Wendy is doing well. We’re doing well as a family,” he told Entertainment Tonight‘s Kevin Frazier on March 21.

It’s been a tumultuous 2019 for the 54-year-old entertainment icon. She took a hiatus from her self-titled show from January through March to deal with complications from Graves disease. She told her studio audience that “I am happy to tell you I am doing swell. I’m at home and taking my thyroid meds and meditating,” upon her March 4 return. But it wasn’t until this week that she spoke her truth about what else she’s been going through.

“Kevin and I have the Hunter Foundation for the good of the people. And we recently launched our 888-5Hunter number for those of you caught up in the struggle of addiction. Well, for some time now and even today and beyond I have been living in a sober house,” she revealed to her somber audience on Tuesday and the end of her show.

“When you see me come to work, glammed up, right after the show I go across the street, I do my pilates. I told you, two hours a day…to take care of my body,” she continued. “And you know I’ve had a struggle with cocaine in my past. I never went to a place to get the treatment. I don’t know how, except God was sitting on my shoulder and I just stopped.” Wendy has been open about kicking a cocaine addiction during her days in radio in the 1990s before she became a daytime TV darling.

“So, this is my autobiographical story, and I’m living it. I’m telling you this,” she continued, breaking into tears. “After I go to the pilates, I go to several meetings all around town in the tri-state area. And I see my brothers and sisters, caught up in their addiction and looking for help. They don’t know I’m Wendy. They don’t care I’m Wendy. There’s no autographs. There is no nothing. It’s the brothers and sisters caught up in the struggle.” She revealed that she afterwards “I am driven by my 24-hour sober coach back to the home that I live in, here in the tri-state with a bunch of smelly boys who have become my family.”

Then it’s lights out at 10pm and “I go to my room, and I stare at the ceiling and I fall asleep to wake up and come back here to see you. So that is my truth,” she concluded as the audience gave her a massive round of support applause. Wendy added, “I know, either you are calling me crazy or the bravest woman you know. I don’t care.”