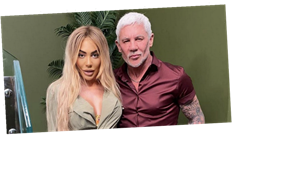 Wayne Lineker has confirmed he and Chloe Ferry are "seeing each other".

The 58 year old, who was recently labelled as "cringe" after his flirty behaviours on Celebs Go Dating, made the confession while speaking to TOWIE’s Bobby Norris and journalist Stephen Leng on FUBAR Radio on Access All Areas.

When asked who his celebrity crush is, the brother of former professional footballer Gary said: "Oh, that’s Chloe [Ferry] obviously!"

TV personality Bobby, 34, couldn't help but follow up by asking about Wayne and Chloe's recent fake engagement which baffled fans across social media.

Wayne had claimed he and the 25 year old got engaged after filming the popular E4 series as he posted two photos of them smiling together as Chloe held a hand up with a massive diamond on her ring finger. The pair later confirmed it was a prank.

Bobby said: "Miss Ferry. I saw all about this engagement! How did it come about Wayne?"

The Ibiza beach club owner explained: "Me and Chloe just have a laugh all the time. We’re in the mansion and she had a wedding ring.

"She went, ‘Come on, Wayne, let’s pretend we’re getting married’. And we took all the pictures and everything and we didn't end up doing it, we just forgot about it."

He continued: “And she phoned me up last week. Because, I mean, we are seeing each other a little bit and having a bit of flirtatious banter and we'll see what happens in the summer.

These are the workout looks celebrities are loving right now and they start from just £3.49

Wayne, who was recently fiercely defended by Chloe after he was branded a "paedophile", went on to explain how close they are.

He said: “But yeah, me and Chloe are really tight. She came on my podcast last week, No Excuse for Abuse, and she was amazing you know. But yeah, we’re really really close and she’s coming to Ibiza for the summer. And so, we’ll see what happens."

When asked if they're seeing each other "romantically", he added: "We’re always flirting, Bobby."

Despite this, Wayne said he thinks he's doomed to be a singleton forever as he later said: "Yeah, I think I’m doomed you know?"

"But I'm happy on my own. I'm very happy in my own company, so we'll see what happens. But yeah, it's a funny one," he continued.

“I mean to be my girlfriend must be very difficult with the industry that I'm in, you know. I do accept that. So yeah, I’m sort of training my mind now to get ready for single life forever.”