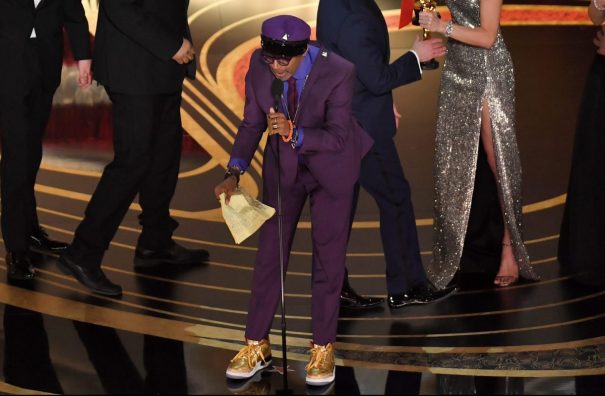 Spike Lee brought the Oscars audience to its feet after winning his first Academy Award for adapting BlacKkKlansman from Ron Stallworth’s memoir about a black police detective who infiltrates the Ku Klux Klan.

After accepting the Oscar from frequent collaborator, Samuel L. Jackson, Lee delivered an impassioned speech about the journey of African-Americans in the U.S. He noted that February is Black History Month and said it has only been a few generations since members of his own family were enslaved.

“From 1619 to 2019, 400 years, 400 years that our ancestors were stolen from mother Africa and brought to Jamestown, Virginia enslaved,” Lee said. “Our ancestors worked the land, can’t see the morning, can’t see at night.”

He then explained that his grandmother helped define who he is.

“My grandmother… who lived 100 years young, was a Spelman College graduate, even though her mother was a slave,” he said. “My grandmother who saved 50 years of social security checks to put her first grandchild — she called me Spikey Poo — she put me through Morehouse College and NYU grad film.”

As the audience erupted into applause, Lee added, “Before the world tonight, I give praise to our ancestors who helped build this country.”

Oscar Micheaux was the nation’s first black filmmaker, when he made his first movie in 1919. The author turned writer/producer/director received recognition for his body of work (some 44 films) by the DGA in 1986, long after his death.

He went on to remind viewers that the 2020 elections are right around the corner.

“Let’s all mobilize, let’s all be on the right side of history. Make the moral choice between love versus hate. Let’s do the right thing!” he shouted, tipping his hat to his 1989 film Do the Right Thing.

Lee was previously nominated for writing Do The Right Thing and in the best documentary category for his 1997 film 4 Little Girls. He also received an Honorary Oscar in 2016.

BlacKkKlansman premiered at Cannes in May, and won the festival’s Grand Prize.

The film stars John David Washington (Ballers) as Stallworth, the first African-American detective in the Colorado Springs Police Department. Hoping to make a name for himself, Stallworth comes up with a plan to go inside and expose the KKK. Washington is joined in the cast by Adam Driver, Topher Grace, Laura Harrier and Corey Hawkins.

The Focus Features release was produced by Jordan Peele and Jason Blum, the team behind Get Out.

It was Peele who called Lee and pitched him the story of BlacKkKlansman. Peele pitched Lee using only six words, “Black Man infiltrates Klu Klux Klan.”

The film was released in U.S. theaters on Aug. 10, to coincide with the one-year anniversary of a white supremacist rally in Charlottesville, Virginia, that claimed the life of counter-protester Heather Heyer.

Lee wanted to incorporate footage of the Charlottesville tragedy into the film. But first, and out of respect, he contacted Heyer’s mother, Susan Bro. She gave him permission to use her daughter’s photo and the footage of her murder at the end of the film. By doing so, it allowed the real-life sacrifices and fight against racism to sink in — and was a powerful exclamation point at the end of the film that hate is rising.