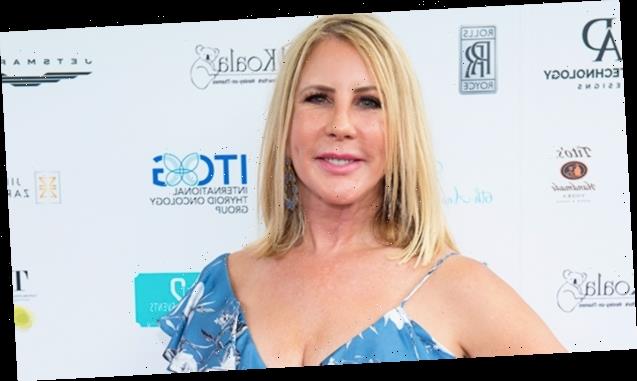 Whoop it up! Vicki Gunvalson’s daughter Briana Culberson gave birth to her third child with husband Ryan on Nov. 18 — see the first photos of baby Hank.

Vicki Gunvalson, 58, was leaping for joy when she became a grandparent all over again! The former RHOC star announced the happy news on Instagram a day after her daughter Briana, 33, and son-in-law Ryan Culberson, 36, had welcomed their third baby boy named Hank Ryan on Nov. 18. Vicki shared a photo of the newborn baby at the hospital, which showed her son-in-law cutting the umbilical cord!

“Congratulations Briana and Ryan on the birth of your beautiful baby boy,” Vicki gushed in the birth announcement post, adding the hashtag #3, #my3sons and #grandsonsrock — making it very clear that she’s stoked to be a grandmother of three precious boys! Ryan shared the same photo of himself perched over the newborn at the hospital, scissors ready in hand to cut the cord, a milestone that the father was quite proud of.

“At 9:37 AM I cut a cord! Mom and son are doing amazing! I’m pumped!!!,” Ryan gushed in the caption of his post. He also shared another photo of the baby bundled up in a blanket, snoozing away in his hospital bed with a sign that displayed his name, birth date (Nov. 18 at 9:37 a.m.), weight (five ounces) and height (20 inches). “He’s perfect!,” Ryan wrote under the sweet photo.

Baby Hank joins his two older brothers, Troy, 8, and Owen, 6. Vicki revealed that her two grandsons were getting another brother in April of 2020, and shared Briana’s pregnancy news in a creative way. The RHOC alum shared an image of five paperclips, one to represent each family member in her daughter’s family (including the incoming baby).

Midway through the pregnancy, Ryan shared photos of what Briana’s baby bump looked like at seven weeks along versus 15 weeks along. At the time, Ryan noted that his wife was still waiting on the bump to “really pop out,” since she was following a strict low-carb, high-fat keto diet (thus, she coined it a #ketopregnancy).

Congratulations to Briana, Ryan, and Vicki! The former Bravo star‘s daughter has been happily married to Ryan since Oct. 2011, and they’ve been expanding their family ever since.

Kate Middleton is ‘most confident’ when she is ‘standing alone’
ENTERTAINMENT