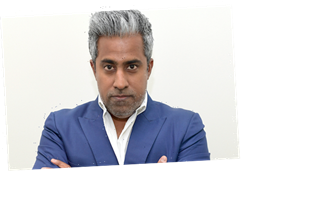 “The ‘freedom’ to be left alone by the government is literally killing us during the pandemic,” Anand Giridharadas reiterates

The Vice TV host who said those arguing to reopen the country amid the coronavirus pandemic are obsessed with “freedom” to the point of their own detriment has responded to criticism from Fox News host Sean Hannity and Laura Ingraham.

“Let me say this in plain English, my first language: I am an American,” Anand Giridharadas says in Wednesday’s “Seat at the Table,” which will air at 10 p.m. ET. TheWrap obtained an exclusive preview that is embedded above.

Noting his parents were born in India and he was born in Cleveland — but it wouldn’t matter if he hadn’t been, he goes on, addressing his monologue to Hannity and other Fox News personalities by name: “Families like ours don’t need to be informed of how special America is because we chose it. While tonight I double down on my belief that our narrow understanding of freedom as a culture — as the freedom to be left alone by government — is literally killing us in this pandemic, and prevents us from seeing other, non-governmental threats to our life, liberty and happiness, I celebrate the freedoms my family found here. Chief among them for me, as a writer and as the host of this show, is the freedom to speak. And I will speak.”

All of this came about after an appearance on MSNBC’s “Morning Joe” last week during which Giridharadas, a contributor for the network, remarked on those arguing to reopen businesses over a concern that the government is infringing on too many rights by keeping areas locked down amid the pandemic.

“There’s a primordial American tradition going back to the founders of being freedom-obsessed — even though we’re a country founded on slavery and genocide — being freedom-obsessed to the point where we’re always so afraid of the government coming for us that we’re blind to other types of threats, whether it’s a virus, whether it’s bank malfeasance, climate change, what have you,” Giridharadas said.

Fox News’ Brian Flood reported on Giridharadas’ comments, while Hannity branded them “MSNBC MELTDOWN.” Giridharadas replied with gratitude that the primetime host amplified his statements and reposted Ingraham’s segment on his comments, too. During last Wednesday’s episode of the “Ingraham Angle,” she said, “Let that sink in: We are ‘freedom-obsessed.’ Yes, I am. Guilty as charged.”

Giridharadas continued to tweet after that, saying he’d been subjected to vicious online comments from Fox News viewers after his comments were picked up by the hosts.

Innovative Ways Stars Are Helping Out During the Coronavirus Pandemic (Photos)

From good news broadcasts to meal delivery, these celebrities are giving a little extra

Celebrities are using their influence and resources to provide assistance to the needed impacted by the coronavirus and the front line health care workers combatting the disease.

While many stars have donated money or performed in benefit concerts, some have gone the extra mile in terms of hands-on giving or simply spreading goodwill.

From John Krasinski’s Some Good News broadcast to Bethenny Frankel’s BSTRONG initiative, check out the innovative ways the stars are helping out during the coronavirus pandemic.