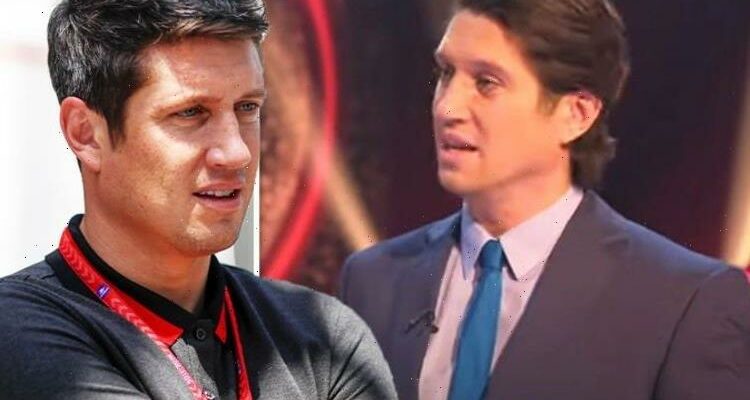 Strictly: Vernon Kay says he’d be like a ‘drunk giraffe’

Just the Two of Us host Vernon Kay, 47, has taken to Twitter to break his silence after it was confirmed that he would not presenting This Morning alongside Rochelle Humes as planned. Over the weekend it was revealed that the star had tested positive for coronavirus, forcing him to cancel various presenting duties he had lined up. He has now taken to Twitter to give his followers an update on his condition.

Missing out on my This Morning debut today cause of COVID

In view of his 1.1 million followers, Vernon thanked his fans for their support.

He wrote: “Missing out on my This Morning debut today cause of COVID.

“I was up for a bit of fashion and cooking with Rochelle..”

The star went on to give his followers an update of his condition, revealing that his symptoms were so far not that bad.

Vernon was due to front This Morning alongside Rochelle from todau until Thursday.

However, over the weekend he confirmed that he had been forced to pull out of his hosting duties.

He said: “I’m absolutely gutted that because of a positive Covid test I’m no longer able to present on This Morning next week with Rochelle nor do Radio 2 guest hosting and Steve Wright’s cover.

“Two iconic shows which I’ve been a fan of for decades,” he told The Sun.

One wrote: “So gutted for you. Hopefully you’ll have a chance to do This Morning again in the future. Get well soon x.”

Another added: “Oh Vernon I was so looking forward to seeing you on This Morning, gutted you’ve got the dreaded covid.

While a third penned: “This would have been a fun show. Hopefully you’ll get to host the show with @RochelleHumes sometime in the future.”

Ruth Langsford and Eamonn Holmes have been hosting over the summer break, with the latter stepping in last-minute once again yesterday.

The show is now being hosted by Rochelle and Eamonn until Holly Willoughby and Phillip Schofield return on Monday.

As Friday’s instalment came to a close, Ruth and Eamonn bid farewell to those who had tuned in to watch them.

After a series of clips played out of their best bits of the summer, he said: “Thank you, everybody, thank you, crew.

“Seven weeks, five days a week and it’s just flown by like that.”

This Morning airs on weekdays at 10am on ITV.