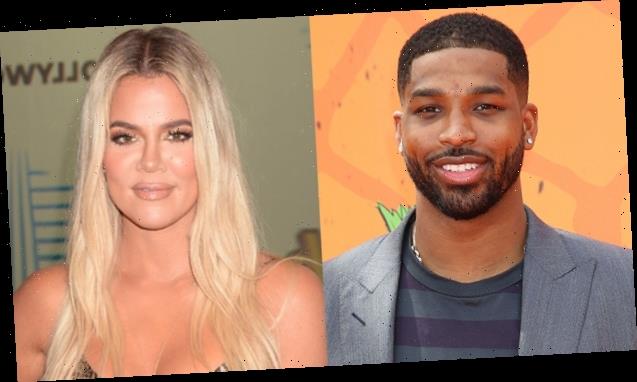 Tristan Thompson appears to still be on his quest to win back Khloe Kardashian! Per usual, he left yet another charming comment under her latest Instagram photo — a sexy snap of her in a skintight white dress. In his defense, we would’ve left the same comment…

Khloe Kardashian is sizzling hot in a white mini dress in a new photo [SEEN HERE] she posted to Instagram on December 12. And, her ex-boyfriend, Tristan Thompson thinks so too! The Cleveland Cavaliers big man, 28, who’s known to comment on nearly every photo she shares, did just that not long after Khloe, 35, uploaded the sultry snap. Instead of leaving any words of endearment, Tristan simply dropped four emojis in the comments — two heart-eyed emojis and two red hearts.

Tristan’s latest comment comes just days after Khloe admitted that she’s finally forgiven him for cheating on her multiple times. — One time in particular was in February when he kissed former Kardashian family friend, Jordyn Woods at a house party in LA. While Khloe and Tristan weren’t together at the time, they had still been working on their relationship, she previously admitted. The first time Tristan cheated was in 2018, just days before Khloe gave birth to their daughter, True Thompson that April.

Khloe posted a lengthy rant to her Instagram Story on December 5, which revealed that she had finally forgiven Tristan. The post was in response to backlash from this past week’s episode of Keeping Up With the Kardashians, in which fans slammed her friends Malika and Khadijah Haqq for seemingly supporting the idea of her getting back with Tristan. “I don’t hold any negative or hateful feelings towards ANYONE!”, Khloe wrote. “We are all humans trying to figure out this thing called life. Who am I to condemn anyone else? Yes, I’m allowed to feel hurt and pain. It would be unnatural for me to pretend as if I don’t,” she continued, explaining, “Personally, I don’t want to be carrying around a hateful heart. I crave peace in my life. Me holding onto hate is going to hurt me in the end.”

Tristan joined a ton of other big name celebs in the comments who gushed over Khloe’s beauty. From Ayesha Curry to Kim Zolciak Biermann — the comments section was flooded with fire emojis and praise over Khloe’s Good American outfit, her voluminous hair, and her luscious pout. The Keeping Up With the Kardashians star modeled her GA white mini and a new white button-up top, and encouraged her 101 million followers that white is still in this winter.

“Who says you can’t work a mini dress in the winter?! Layered with my @goodamerican button up coming soon!”, Khloe captioned the photo. Her athleisure brand has expanded from jeans to bodysuits, workout clothes and more.