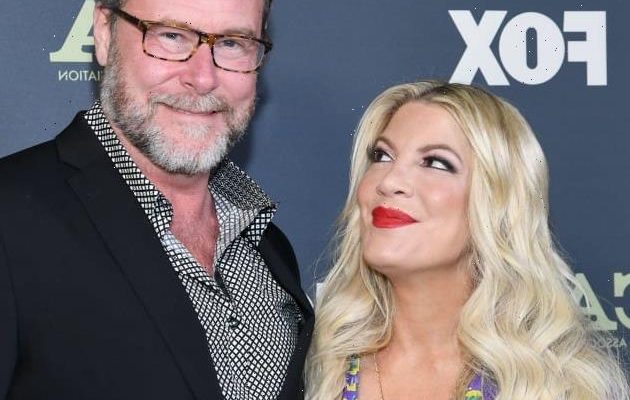 Things are not looking good for Tori Spelling and Dean McDermott’s marriage.

Like, even for them and their extremely messy history, things are looking somewhere between bad and over.

Tori and Dean not sharing a bed was one thing. Nonstop fighting is another.

There are even more obvious, damning signs that this marriage has run its course.

Together, they share five children … and a whole lot of disagreements.

As those who have followed the couple closely are aware, Dean McDermott recently worked on projects in Canada.

That meant spending time away from his family, as many actors do.

But not all actors are quite as gleeful to be separated from their spouses as Dean reportedly was.

According to what an inside source told The Sun, Dean kind of wishes that he were still up there.

“He was not just happy to be going away,” the insider began.

The source continued: “he was ready to be done with his marriage when he returned.”

He came back to see “bills that had piled up.”

The insider added: “And a lot of those bills are in part because they have so many pets.”

Apparently, the abundance of expensive pets are a recurring point of contention for the couple.

These pets create “a huge mess,” according to the source — at least, that’s what Dean feels.

The insider characterizes the perennial conflict: “It’s just another thing they fight about.”

“They don’t share a bedroom,” the source added, echoing Tori’s own statements.

“They are sort of stuck,” the insider expressed.

Not just stuck in a rut. Like … stuck in their lives, as things are.

“He financially can’t afford to really move out right now,” the source shared.

Many people stay with exes, bad roommates, or toxic families because housing is prohibitively expensive.

One doesn’t normally think of reasonably famous actors falling under this category, but it happens to them, too.

That’s what’s happening inside the home and inside the marriage, according to insiders and to Tori herself.

(As we noted, she confirmed the separate bedroom thing — laughing it off as because of their pets and kids sleeping in the bed)

But outside of the home, things are looking somehow even more grim.

Tori and Dean have each been photographed, very separately, running errands … with no wedding rings on their fingers.

Some couples very casually go without their rings, but this is actually a first for Dean since their marriage in 2006.

Looking at some of the troubles that they’ve had with Dean wearing his ring in public every time, this looks downright dire.

Tori also excluded Dean from the family’s Christmas card and then again for their Easter photo.

Going ringless can be explained.

Leaving out your actual husband from holiday cards, frankly, cannot.

Mother’s Day, Father’s Day, the Fourth of July … each of these came and went.

From their public posts, Dean and Tori appeared to not even recognize that the other existed.

And things are even more direct, if one-sided, on social media.

Tori no longer lists “wife” as part of her Instagram bio.

Think about what that means, because it’s not like you have to manually renew your bio or whatever.

It means that she opened Instagram, edited her bio, and deleted that one description — all very deliberately.

Dean does not appear to have changed or updated his Instagram.

(If you’re not an avid social media user, you probably don’t think to tweak your bio at every life change)

But that was not the case for Tori. Is there any coming back from this?