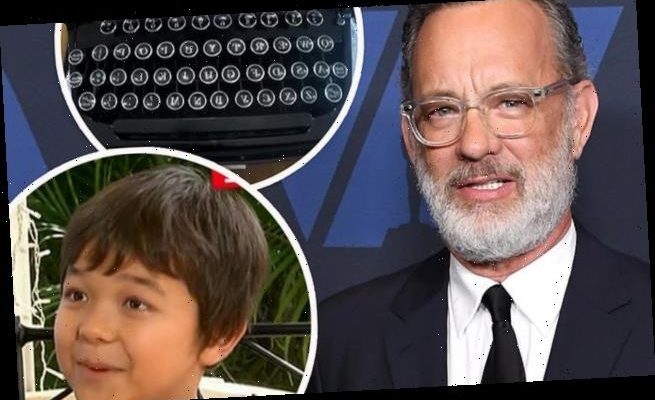 Tom Hanks has sent his treasured vintage Corona typewriter to a schoolboy who wrote to him about being bullied for having the name Corona.

Corona De Vries, an eight-year-old from the Gold Coast in Australia, wrote to the Hollywood star after he and his wife, Rita, spent more than two weeks in quarantine after testing positive for the coronavirus in the beach resort.

The boy had written to Hanks saying: ‘I heard on the news you and your wife had caught the coronavirus,’ Channel 9 News reported. ‘Are you ok?’

He said he loved his name but people at school called him the coronavirus, which made him ‘sad and angry’. 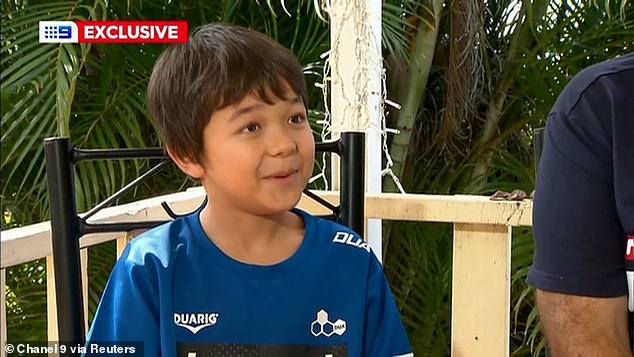 Gift from Hanks: Toy Story star Tom Hanks sent a Corona typewriter to bullied Australian boy named Corona and told him ‘you got a friend in me’, referencing the Pixar film’s theme tune 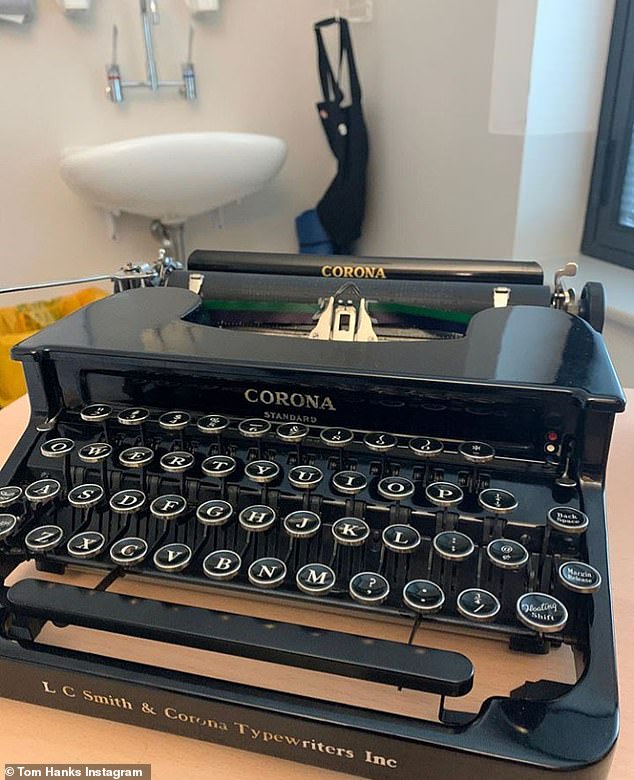 Precious gift: Hanks sent his Corona typewriter to the bullied boy; here he posted a picture of it to Instagram while updating fans during his recovery from COVID-19

In response, he received the letter and typewriter, sent by Hanks himself.

‘Your letter made my wife and I feel so wonderful!’ Hanks replied in a letter typed on the Corona typewriter, which he had taken to Australia when he was taken ill last month.

‘You know, you are the only person I’ve ever known to have the name Corona – like the ring around the sun, a crown,’ the double Oscar winner wrote to the boy.

‘I thought this typewriter would suit you. Ask a grown up how it works. And use it to write me back.’

Hanks handwrote at the end, referencing the theme tune to Pixar’s Toy Story, for which he voices Woody: ‘P.S. You got a friend in ME!’ 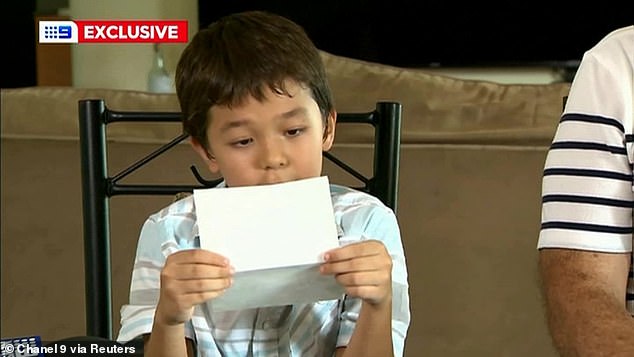 Welcome gift: Corona was delighted with his gift from the A-lister

Hanks took the typewriter with him to Australia on the trip which saw him diagnosed with coronavirus last month.

During his recovery in isolation with fellow sufferer, wife Rita Wilson, Hanks shared a picture of his Corona and wrote: ‘I traveled here with a typewriter, one I used to love.’

Hanks and Wilson were among the first high-profile individuals to contract COVID-19 – which infects the respiratory system and can be fatal – and they fell ill whilst in Australia where Hanks was making his new movie, Baz Luhrmann’s upcoming Elvis Presley biopic. 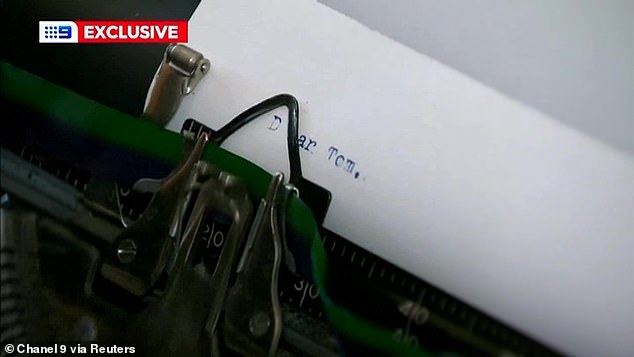 ‘Dear Tom’: The child sent a letter back to the actor, using the typewriter 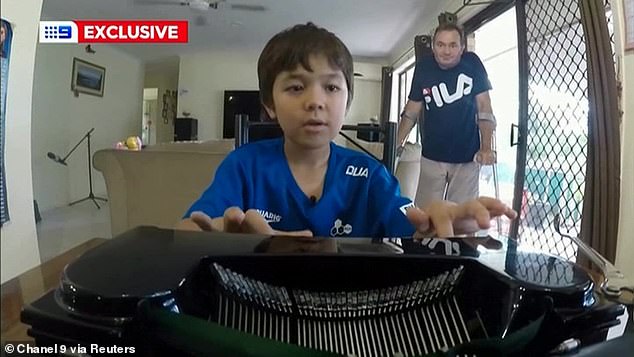 ‘I thought this typewriter would suit you,’ an image of the letter aired by Channel 7 News showed. ‘Ask a grown up how it works. And use it to write me back.’

The 63-year-old shared the news with fans on March 12, writing on Instagram: ‘We have Covid-19 and are in isolation so we do not spread it to anyone else. There are those for whom it could lead to a very serious illness.

‘We are taking it one-day-at-a-time. There are things we can all do to get through this by following the advice of experts and taking care of ourselves and each other, no?

The Forrest Gump star finished his message with a quote from him film A League Of Their Own, writing ‘Remember, despite all the current events, there is no crying in baseball.’

He updated fans on March 17, writing: ‘Good News: One week after testing Positive, in self-isolation, the symptoms are much the same. No fever but the blahs. Folding the laundry and doing the dishes leads to a nap on the couch. Bad news: My wife has won 6 straight hands of Gin Rummy and leads by 201 points.

‘We are all in this together. Flatten the curve.’ 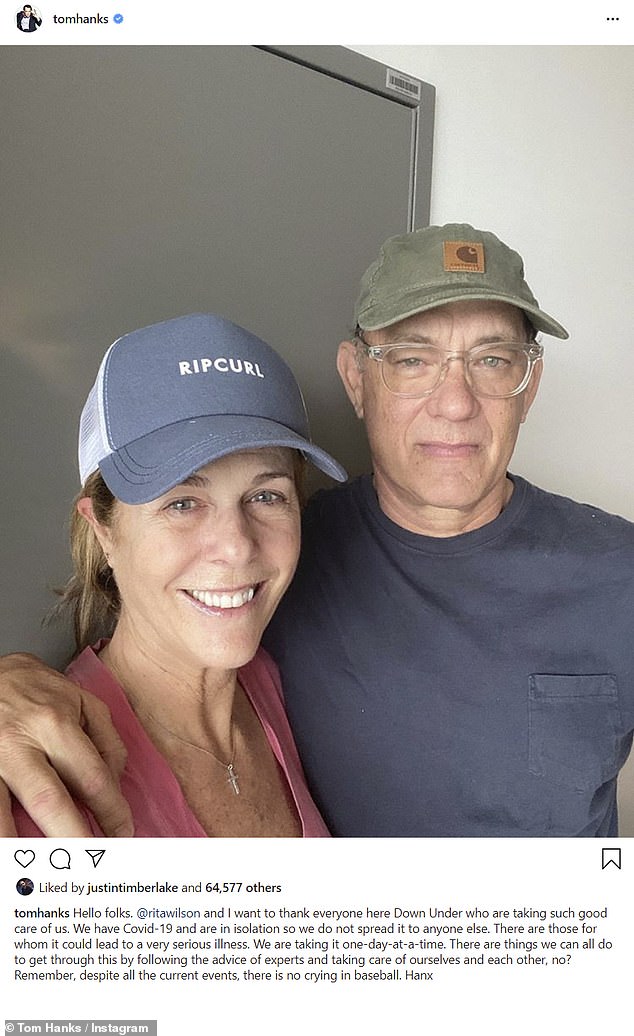 Bad news: Tom shared his diagnosis with fans via Instagram

After going public with their diagnosis and keeping fans updated on their condition whilst in isolation Down Under, Hanks and Rita made a full recovery and were allowed to return to their home in Los Angeles.

Upon arriving back in the US, the two enrolled in a medical study after their blood tested positive for coronavirus antibodies. They will now donate blood which will be used by scientists developing a vaccine.

On the public radio game show NPR’s Wait Wait… Don’t Tell Me! Hank said on Tuesday: ‘We just found out that we do carry the antibodies.

‘We have not only been approached; we have said, do you want our blood? Can we give plasma? And, in fact, we will be giving it now to the places that hope to work on what I would like to call the Hank-ccine.’ 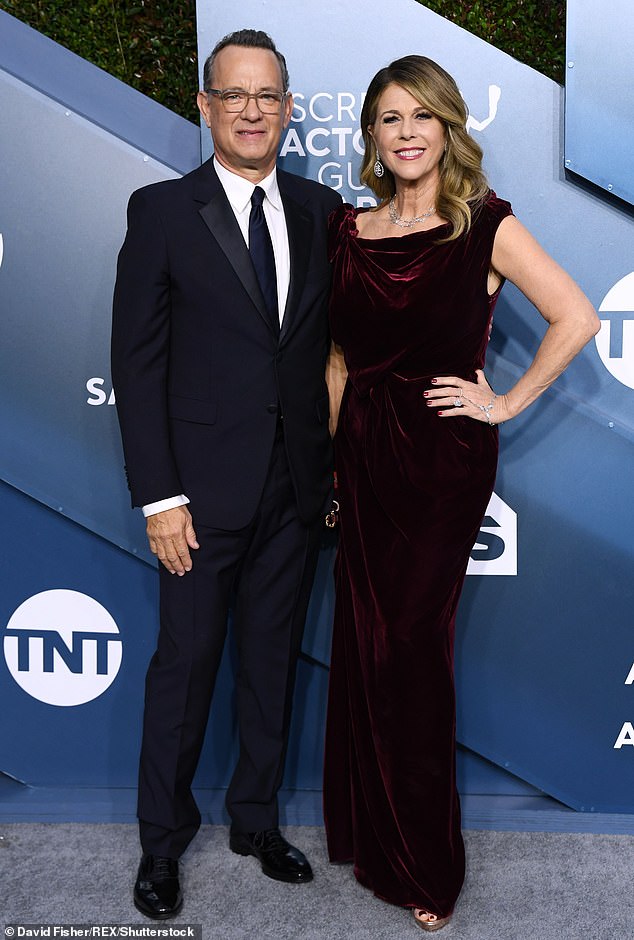 Taken ill: Hanks and Rita Wilson are seen in January; the following month they headed to Australia where they were diagnosed with coronavirus

The Forrest Gump actor previously revealed that his producer-and-actress wife Rita suffered much worse coronavirus symptoms than he did and he was concerned for her health.

He said: ‘Rita went through a tougher time than I did. She had a much-higher fever and she had some other symptoms.

‘She lost her sense of taste and smell. She got absolutely no joy from food for a better part of three weeks. She was so nauseous, she had to crawl on the floor from the bed to the facilities. It lasted a while.’

Now that Tom and Rita are back on their feet, their using their energy to advocate for mail-in voting.

‘We as Americans and as voters should be able to request the options that work for us,’ Wilson said. ‘We don’t want to have to risk our health or our vote. So to make that easy, mail-in ballot, absentee ballot, I think that’s a really great compromise.’