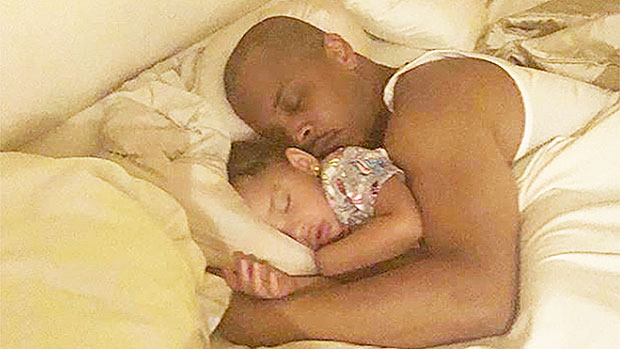 Could she get any cuter? Little Heiress just can’t keep her eyes open in her carseat — but is she really sleeping? See for yourself!

It’s no secret that Tameka ‘Tiny’ Harris, 43, and T.I., 38, have an adorable brood, and their youngest Heiress Harris, 2, has been stealing hearts on social media since she was born in 2016. But her latest video might be the cutest yet! In the funny footage, which Tiny posted on Dec. 2, the little tyke was sitting in her carseat and wearing a pink sweater. But while it looked like the little one was fast asleep, groggily opening her eyes every time her brother King Harris, 14, said her name, Tiny called her out for faking in the caption! “My baby @heiressdharris is a whole 2 year old actress out here in these streets,” she wrote. So is that why Heiress kept waking up with a little smile on her sweet face?

Some fans couldn’t believe that Tiny and T.I.’s daughter had been acting like she was asleep — her heavy eyelids and open mouth were pretty convincing, if you ask us — so if she was faking it, Heiress sure has a successful career in her future. “Full blown actress,” one social media user wrote. “Tiny I can’t take her.” Another added, “She got that it factor.” But this wasn’t the first time that Heiress has made us laugh with an Insta video recently — far from it! Who could forget the little tantrum she threw when she found out her brother had been in her mom’s belly first? The two-year-old was so jealous and oh so cute arguing with her older bro.

And as if that wasn’t adorable enough, Tiny once even shared footage of Heiress spelling her name to the tune of B-I-N-G-O!

We can’t get enough of this little cutie and all of her sassy attitude! Here’s to hoping her parents keep sharing silly videos of Heiress as she grows up. The more, the merrier!