The optical illusion of the year is an animated cat’s cradle that turns both horizontally and vertically and both clockwise and counterclockwise. The illusion hails from Frank Force, a programmer and video game designer who makes art, and apparently optical illusions, as one of his eclectic interests. Force’s “Dual Axis Illusion” won top prize after making a shortlist of 10 finalists.

Force also put an interactive, adjustable form of the illusion on his github page. Once you get over how engrossing and vaguely hypnotizing it is, you can start to see how the moving pieces are tricking your eye. Dual Axis Illusion is kind of like the Cat’s Cradle string game, where the changing topology of one circular length of string is taken through several iterations without ever resetting the shape of the string. We watch one continuous shape made from overlapping thick black lines as it twists, but Force has designed it to appear to twist every way at the same time.

Our brains are powerful, yet strangely rigid in some ways. Optical illusions both play with this rigidity and allow scientists to study how our brains are processing information. We want visual signals to organize themselves into cohesive objects and motion even when the actual information isn’t complete or delineated. Force’s demonstration video for Dual Axis Illusion is wonderful—he uses inserts of opaque color to show, in isolation, how each axis and direction of motion is running simultaneously.

Force’s illusion is similar (in a very broad sense) to the famous Necker cube, an outline of a cube with no visual indicator of which corner is pointing toward the viewer. The brain fills in whatever it wants, but you can also concentrate and see whatever the opposite is of your first impression—the other potential orientation of the cube. Our viewing of Dual Axis Illusion is at least superficially related, including our brain making a decision about which contextless lines are “in front of” the others.

The Illusion of the Year contest comes from the Neural Correlate Society, a nonprofit named, aptly, after the set of information our brain needs in order to form a perception. The board is made up of neuroscientists and researchers who say their mission is to “[promote] public knowledge and medical translation of new discoveries related to the neural correlates of sensory and cognitive experience.” Illusion of the Year is the society’s big attention-getter, but it works year round to spread awareness of new cognitive research. 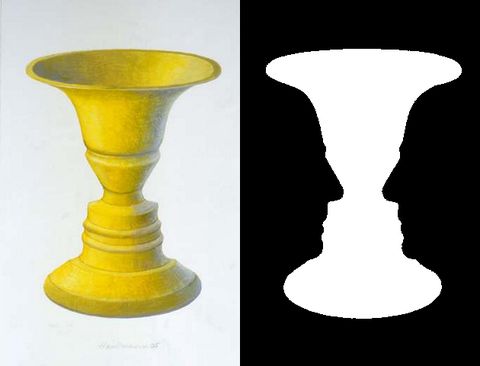 Even the virtual trophy for Illusion of the Year is an illusion based on the Rubin vase, pictured above. Like the Necker cube and Force’s Dual Axis Illusion, the Rubin vase is bistable, meaning it has two recognizable states, and specifically it’s also reversible, because the negative space of one state forms the second state. The Rubin vase is easy to look at, but some bistable illusions get, well, a lot more challenging.