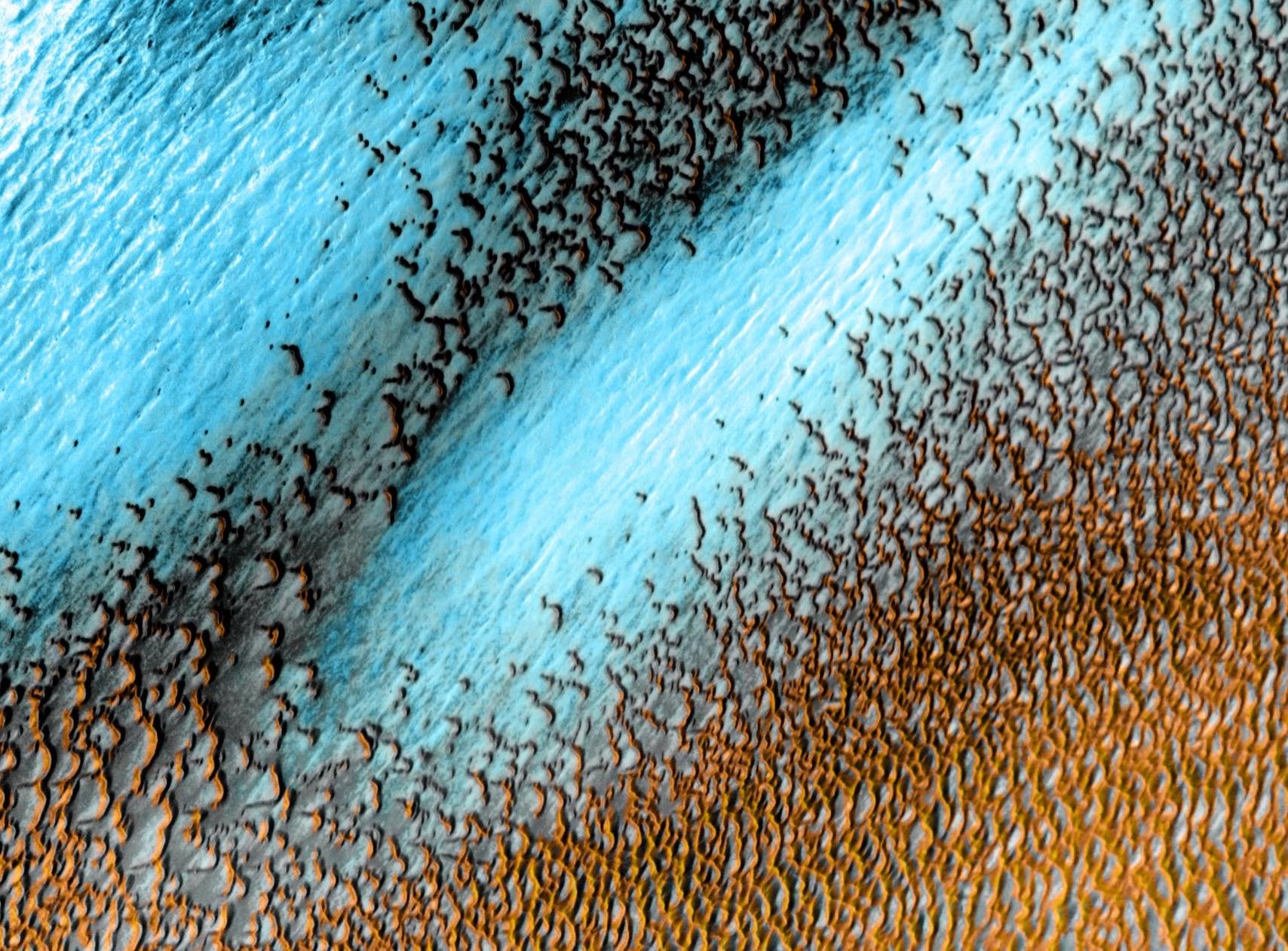 In honor of two decades spent mapping Mars with the history-making Odyssey spacecraft, NASA is celebrating by sharing the coolest photos from the red planet. The images pay homage to the Odyssey, the world’s longest-running Mars spacecraft, and one in particular shows incredible detail of a 19-mile area of Mars’ dunes — and the internet is geeking out over the results. These tweets about NASA’s photo of "blue" dunes on Mars show people are entranced by some of the detail photographed at the red planet’s northern polar cap.

NASA recently took a look back at 20 years of its longest-lasting spacecraft at Mars by paying homage to some of the most groundbreaking images from the Odyssey’s early days. In an April 7 blog post, the National Aeronautics and Space Administration (NASA) revealed that the spacecraft still has major implications for studies of Mars even today, and almost any mapping study of the Martian includes data from the Odyssey. While technology has continued to evolve over the past 20 years, NASA noted that Odyssey’s infrared camera, known as the Thermal Emission Imaging System, or THEMIS, was the leader for capturing the most complete global maps of Mars for many years.

Case in point: an enhanced-color photo taken between 2002 and 2004, which captures a sea of dunes at Mars’ northern poplar cap and remains breathtaking almost 20 years later. NASA reshared the image in a tweet on April 9, writing, "Feeling the blues takes on a different meaning on Mars. The blue dunes captured in this false-colored image surround Mars’ northern polar cap and cover an area as large as the stage of Texas."

While the sky blue and warm yellow hues are eye-catching, NASA noted that the photo is actually a false-color image, meaning that the colors were added later to represent different temperatures in the 19-mile stretch. The light blue represents cooler temperatures (which are plentiful in the frosty polar cap) while the shades of yellow represent the "sun-warmed dunes."

While the color depicted might not be completely accurate, people are loving the cool shot and the intricate detailing displayed in it.

While the imaging looks like it covers a vast area, the 19-mile stretch is actually only a fraction of the sea of dunes, which NASA explained in the post covers an area that’s about as big as Texas.

With NASA’s first Mars helicopter (the Ingenuity) scheduled to take off sometime in the next few days, it wouldn’t be surprising if space fans get to see a little bit more of the red planet sooner rather than later. In the meantime, you can check out NASA’s Odyssey blog for more images from the long-running spacecraft.