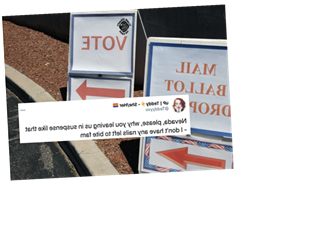 As the results of the 2020 election remain unclear, many voters are waiting anxiously for key states to finish up their ballot counts. One of the most-watched states in the race to tally up all the votes is Nevada, and people on Twitter have a lot to say about waiting. If you’re also starting to feel a little impatient, check out these memes about counting ballots in Nevada so you can at least laugh while you wait.

As of 9:31 a.m. ET on Thursday, Nov. 5 86% of ballots cast in Nevada have been tallied, according to The New York Times ballot tracker, but the state hasn’t yet reached a threshold where news organizations can project a winner. While it might not be the ideal situation, the delay didn’t come out of nowhere. It’s due to the overwhelming number of mail-in ballots. Nevada’s secretary of state reported 90,023 mail-in ballots had been received as of Thursday, Oct. 15, which exceeded the 87,658 absentee ballots from the entire 2018 general election in the state. As of Wednesday, Nov. 4, the Nevada secretary of state listed a whopping 582,854 mail-in ballots had been approved for counting. As ballot counters work hard to get every absentee ballot counted, it still remains a close call between President Donald Trump and former Vice President Joe Biden.

Since Nevada is a battleground state, the results could be a major turning point in the outcome of the election, and Twitter is very impatient about seeing how it plays out. The state has six electoral votes, but during the lengthy process of counting its record-breaking number of mail-in ballots, Nevada election officials announced late Wednesday night that the state wouldn’t reveal a tally update until Thursday, Nov. 5.

As the clock ticks on, Twitter users are expressing their anxiety at waiting for the key state’s results. Thankfully, they’re doing it in a very hilarious way:

As people wait for Nevada’s count, they are feeling all the feelings with the close-cut election. As of publication, Biden has 264 of the votes in the electoral college. A presidential nominee needs 270 electoral college votes to win, and Twitter is on fire with how close Biden is.