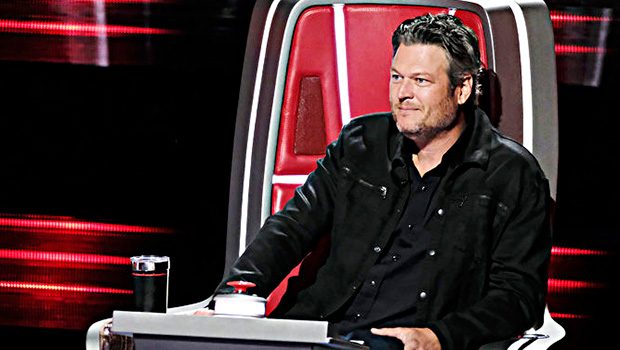 ‘The Voice’ blind auditions are still underway, and the March 4 episode featured some epic performances and back-to-back 4-chair turns. Plus, Blake Shelton didn’t shy away from another Gwen Stefani shoutout!

The Voice blind auditions continue and start off with Jacob Maxwell. He sings a gorgeous acoustic version of Taylor Swift’s “Delicate” that catches Kelly Clarkson and John Legend’s attention. Jacob’s easy on the eyes, too! “You moved me and that’s what it takes for my chair to turn,” Kelly tells Jacob. Adam Levine immediately regrets not turning his chair for Jacob. “Your voice is heavenly,” John says, before noting that Jacob looks like Leonardo DiCaprio. Jacob says people tell him that he looks like Harry Styles all the time. They do have very similar looks and vibes. In the end, Jacob chooses John as his coach!

Karly Moreno is up next. She’s not just a singer, she’s a skateboarder as well! Karly’s ready to start the next chapter in her music career. She performs a slowed down rendition of Hailee Steinfeld’s “Starving.” Adam turns around for Karly and calls her voice “pretty and pure and angelic.” She tells the coaches she’s from Orange County, California, and that prompts Blake to give his love Gwen Stefani a shoutout! “I like Orange County girls,” Blake says, which a nod to her song “Orange County Girls!”

Luna Searles is no stranger to The Voice. She auditioned for the show back in season 2. She’s back for season 16 and hoping to make it far in the competition. She performs a fun rendition of Ike & Tina Turner’s “Nutbush City Limits,” but she just doesn’t get there. None of the coaches turn around.

Carter Lloyd Horne wants to make something of himself. The 19-year-old from Georgia reveals that his family ended up homeless after the 2008 market crash. He sings Midland’s “Drinkin’ Problem.” He’s got some serious talent. Blake and Kelly turn right at the end, and Carter ends up picking Blake. Carter admits that he “felt a connection” with Blake from the beginning.

Talon Cardon, an 18-year-old from Utah, is hitting The Voice stage and performing in honor of his father, who nearly died in a car accident. Talon sings a nice rendition of “Say You Won’t Let Go” by James Arthur. John turns his chair for Talon. Adam admits that Talon has “a lot of potential,” and Kelly thinks he’s going to be a “dark horse” in the competition. John’s got his hands on this rising star!

Patrick McAloon and his daughter, Ruby, are both auditioning for The Voice. They’re trying out separately, which has never been done before. Patrick auditions first with a sensational rendition of “Runaway Train.” Adam and Blake turn their chairs at the exact same time. John turns right before the song ends. Adam praises Patrick’s performance, saying it had “perfect sentiment and emotion.” Blake tells Patrick, “I would be honored to have you on my team.” Patrick ends up going with Adam!

Ruby follows her dad to the stage. The 16-year-old performs Selena Gomez’s “Back To You.” She’s good, but not great. The coaches don’t turn for her, and they’re shocked when they find out her dad just auditioned! Adam tells Ruby this is a great learning experience for her, and John adds that she just needs “more seasoning.”

Alena D’Amico puts her own spin on Shawn Mendes’s “In My Blood.” Kelly and Blake turn for her, and Adam steps in to advocate for Kelly. Both Kelly and Blake really want Alena. Alena can’t resist being on Team Kelly! Kanard Thomas hits the stage to perform “Riding With The King,” and it just doesn’t have much pizzazz. The coaches don’t turn, and they explain why. Blake tells Kanard that he’s a “good singer,” but thought the performance should have had more “edge and angst.” John says that he wanted to feel something that was “more transcendent.”

American Idol alum Dexter Roberts performs an epic rendition of Randy Houser’s “Like A Cowboy.” John, Kelly, and Blake notice something special almost immediately. Adam soon turns his chair around as well. Dexter gets the first 4-chair turn of the night! The first 3 coaches to turn give him a standing ovation. “Everything was perfect,” John says. Adam raves that Dexter’s talent is “astounding.” All coaches really battle it out for Dexter, but he ends up going with Blake!

Jej Vinson is the last singer to perform. He reveals that his parents came to the U.S. from the Philippines in hopes of a better life. Jej admits that he would love to have John as a coach. He takes on Drake’s “Passionfruit” with ease. He’s just 22 years old! Blake is the first to turn his chair, followed by the rest of the coaches. Yet another 4-chair turn! “You’re a better singer than all of us,” Adam sings. John applauds Jej for his technique. Blake goes so far as to say: “We all thought we’re looking at the winner of The Voice this season.” Jej shocks everyone when he chooses Kelly as his coach!