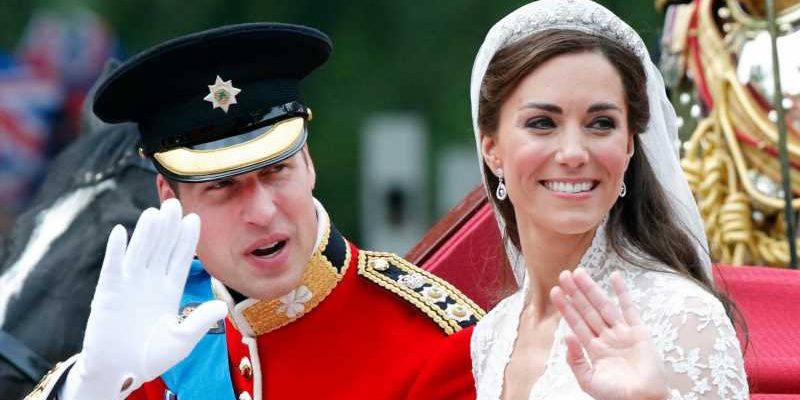 On April 29, 2011, viewers from across the world tuned in for one of the most anticipated weddings of all time — Prince William and Kate Middleton’s, of course!

After meeting at university and dating for several years, William popped the question in 2010 while the couple was vacationing in Kenya, according to Town & Country. The next year would see plenty of planning, speculation, and excitement leading up to the couple’s nuptials, which took place in Westminster Abbey.

According to the royal website, the Archbishop of Canterbury married the couple in the iconic ceremony, and upon tying the knot, William and Kate received the titles of Their Royal Highnesses Duke and Duchess of Cambridge.

10 years after their wedding, things have both changed and stayed the same in William and Kate’s relationship. Over the years, the couple has made countless public appearances, welcomed three children, survived family drama, and diligently prepared for their future roles as King of England and Queen Consort.

Keep reading to take a look back at some of William and Kate’s most memorable moments from their 10 years of marriage.

While their royal wedding was an extravagant, historic event, Prince William and Kate Middleton didn’t sit around and bask in their bliss for too long. Instead, they hopped right into their duties, which included traveling, charity work, and plenty of public appearances.

Kate had accompanied William to public events before their wedding, but now that she had a royal title herself, there was a dynamic shift. Things became business as usual for the couple, though many noticed how well Kate took to her royal duties, and she and William proved to be a powerhouse couple in their first year of marriage.

According to Business Insider, one of their first official duties was meeting with former President Barack Obama and Michelle Obama at Buckingham Palace. Just a few months later, William and Kate embarked on a US and Canadian tour, where they even mingled with some big stars in Hollywood like Jennifer Lopez and Nicole Kidman.

Talk about an exciting first few months to their marriage!

Prince William and Kate Middleton welcomed their first child in 2013

While plenty of people were thrilled to watch Prince William and Kate Middleton tie the knot in 2011, there was an event in 2013 that was arguably just as thrilling for fans: the birth of the couple’s first child, Prince George. While William and Kate celebrated their first-born child, people across England celebrated someone who will someday be king — George is third in line for the crown, behind his grandfather, Prince Charles, and William.

Though welcoming a child is a joyous event, Kate did admit that she struggled in her first year of motherhood. While speaking with workers at a children and parents’ center in Wales, Kate opened up about feeling “isolated” as a new mom. “It was the first year and I’d just had George — William was still working with search and rescue — and we came up here and I had a tiny, tiny baby in the middle of Anglesey,” Kate explained, via People. “It was so isolated, so cut off. I didn’t have any family around, and he was doing night shifts.”

Despite initial struggles, William and Kate eventually left Wales and would soon expand their family even further.

According to Closer Weekly, William and Kate are dedicated to allowing “their kids to be kids.” “To Kate, there is nothing more important than allowing them to express themselves,” an insider explained, adding that the duchess also “doesn’t want her children growing up feeling too entitled.”

As for William, he has taken to fatherhood quite well, though he is grateful to have Kate to lean on. While speaking for a documentary “Football, Prince William and our Mental Health,” William got candid about adjusting to fatherhood and how he and Kate have adapted together. “Having children is the biggest life-changing moment, it really is,” he explained in the documentary, via Town & Country. “Me and Catherine particularly, we support each other and we go through those moments together and we kind of evolve and learn together,” he added in regards to how he and Kate maintain a healthy balance with three young children.

While Kate Middleton has become close with many members of Prince William’s family, there is one notable member missing: his mother, Princess Diana. Diana died in a car accident in 1997, when William was only 15, so Kate never got to meet her husband’s mother. Furthermore, the couple’s children never got to meet their grandmother. Despite Diana’s untimely death, both William and Kate have worked hard to keep Diana’s memory alive, especially for the sake of their children.

According to Hello!, Kate has made a number of sweet tributes to Diana over the years. Notably, Princess Charlotte’s full name is Charlotte Elizabeth Diana, and she was christened in the same church as Diana. Kate wears Diana’s engagement ring, and she has also mirrored the late royal’s iconic style on several occasions.

As for William, he also does his part to keep his mother’s memory alive. In “Diana, Our Mother: Her Life and Legacy,” William admitted that he constantly talks about “Granny Diana” to his children (via People). Because Diana was such a hands-on mother to him and brother Prince Harry, William also notes how it influences his own parenting style: “I want to make as much time and effort with [my children] as I can because I realize that these early years particularly are crucial for children, and having seen, you know, what she did for us.”

Through thick and thin, Prince William and Kate Middleton have had each other's backs

It’s hard for many fans of the royal family to believe that Prince William and Kate Middleton’s 10 year wedding anniversary is on April 29, 2021 — it seems like just yesterday that their historic wedding took place! Of course, much has changed over the past 10 years, though one thing remains certain: William and Kate have each other’s backs no matter what.

The couple, along with the entire royal family, has faced a great deal of drama over the past year after Prince Harry and Meghan Markle stepped back from their royal duties. Things became tenser when Harry and Meghan did a tell-all interview with Oprah Winfrey, which painted both William and Kate in less-than-flattering lights. Despite the drama, the duo has forged on, with Kate apparently helping calm the tension between William and Harry, if only slightly.

Though William and Kate don’t talk about one another publicly very often, Kate did give some adorable insight into their relationship during a virtual conversation with some schoolteachers (via Hello!). “Who has been the greatest support to you during the pandemic?” the teachers asked the duchess, to which she quickly wrote down William’s name and showed it to the camera, smiling.

Only time will tell what’s next for William and Kate, but with 10 years in the books, it’s remarkable to look back and see how much their marriage has transformed so far.